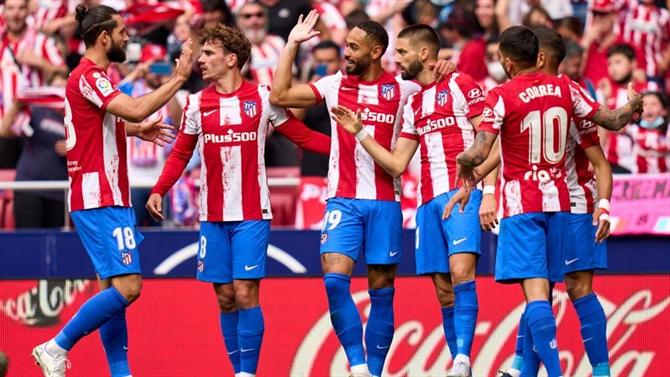 After the defeat against Getafe in the last round, Atlético Madrid was on the verge of losing points again but beat Espanyol, 2-1, with great suffering in the mix after a highly controversial penalty, in a game of the 32nd round of the La Liga.

João Félix started in the attack of the colchoneros but replaced at half-time by Antoine Griezmann. It was already in the second half, in the 52nd minute, that Diego Simeone’s team took the lead, with a goal from Belgian Yannick Ferreira-Carrasco after an assist by Matheus Cunha.

From the 72′, the Madrid players were reduced to 10, as Geoffrey Kondogbia saw his second yellow card and was sent off. Following that move, Raúl de Tomás, a former Benfica forward, scored the direct free-kick and took advantage of Jan Oblak’s fifia to seal the tie. It was the 15th goal in the RDT championship, with the Spanish international placing himself in second place on the list of best merchants.

A huge controversy would be reserved for the final seconds: the alleged handball penalty by Raúl de Tomás was signaled by the referee after seeing the VAR images and Ferreira-Carrasco, at 90+10′, drove Wanda Metropolitano crazy.

Faced with Betis’ draw on this day, Atlético Madrid is more comfortable in 4th place, now having 60 points and three ahead of the Sevillian team. Espanyol is 11th and has 39 points.

Microsoft is developing technology to place ads on Xbox games-GIGAZINE