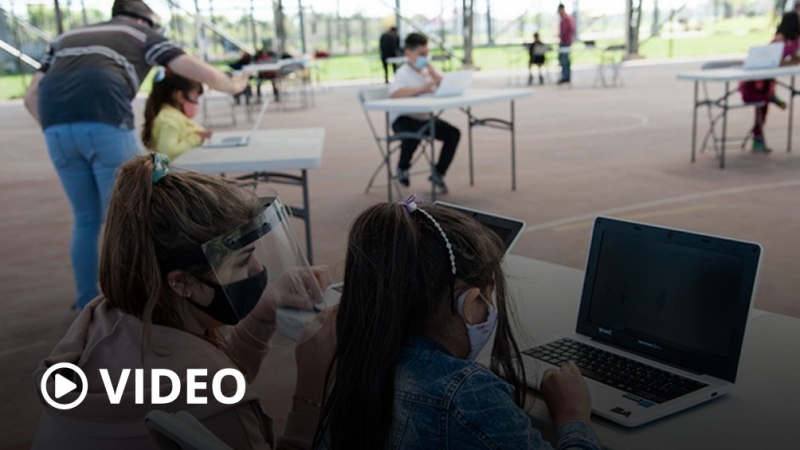 “On February 17, the boys return to the classrooms,” said Larreta

The Government of the City of Buenos Aires ratified the schedule for the beginning of face-to-face classes in the district and for all levels, at the same time that, in the face of a case of positive coronavirus in teachers, schools will not be closed nor will they be suspended the classes.

“Next Wednesday, February 17, the boys return to the classrooms,” began the head of the Buenos Aires Government, Horacio Rodrguez Larreta, during the press conference in which he insisted that the start of classes should not be modified and that will do “gradually”.

After confirming that at least fifteen teachers tested positive in the test that the City is conducting before the start of the school year, both the Head of Government of Buenos Aires and his Minister of Education, Soledad Acua, assured that in those cases the the establishment nor will the classes be suspended for the affected course, which will continue with a substitute.

It is a great satisfaction and a great pride to tell you something that we have been waiting for and for which we have been working for months: the beginning of face-to-face classes for the boys and girls, from February 17, in a careful way. For that we have a plan that I am going to detail: pic.twitter.com/ZSXtcBolWc

“In no case will there be a suspension of classes or the closure of schools,” Acua said during the press conference at the Buenos Aires government headquarters.

See also  Coronavirus in Belgium: Maggie De Block announces when the first vaccines will be available

Rodriguez Larreta confirmed that on the 17th the students will begin at the initial level, the first cycle of primary school, special education, and the first and second year of secondary school.

The schedule is completed on March 8 with the adult school and closes on March 22 with the tertiary professional training institutes.

For the return to school, Rodrguez Larreta assured that the City carried out a “very rigorous survey to see to what extent the buildings are adapted to the needs of measures and ventilation” to avoid contagion among students.

During the presentation of this Thursday, the Government carried out the plan announced two weeks ago and that establishes that admission to schools will be staggered every ten minutes, that students will only share a bubble with their classmates, and that between them there will be a distance of 1.5 meters. Upon admission, the temperature of each of them will be taken and the “space” where the classes are held must always be ventilated

It is not simply a question of resuming presence, but of a first step to continue working for a quality education with inclusion, which allows all boys and girls, wherever they live, to have opportunities for advancement.

The use of the mask will be mandatory from the five-year-old ward and the teachers will also wear a protective mask that will be provided by the Government of Buenos Aires.

See also  Police are shocked by criticism in a documentary about Arnhem villa murder and, just like the Public Prosecution Service, support a review request

With these measures, Rodriguez Larreta assured that the simple four-hour shift every day would be guaranteed.

“Of course we all would like to be able to return to normality as soon as possible, but we have to bear in mind that the school we are going to return to is not going to be the same one we knew before. It will be a new school,” said the chief. of Government porting.

Regarding school canteens, Acua assured that they will not work “in this first stage” but that the delivery of a “nutritious food basket” is guaranteed, which has already been distributed since the beginning of the pandemic when the schools closed.

Acua clarifies that some private establishments were authorized to allow their students to eat in the place as long as they bring their own food and do so in open spaces.

From the Government we are going to support the schools in this adaptation and we are going to carry out a permanent control of all the protocols with the unions and the educational community, as well as the evolution of the health situation to take the necessary measures.

When referring to the teachers infected with coronavirus, Acua specifies that they were “isolated and epidemiological monitoring is being carried out.”

When asked whether in the future the positive cases could cause the closure of the establishment or the suspension of the course where the teacher teaches, the official replied: “There is no school closure, the person is isolated.”

“Our premise is the maximum possible and careful presence,” Acua emphasized.

Among other measures that Rodrguez Larreta detailed for this beginning of the school year, are the suspension of all school events, a specific protocol for music and physical education classes -which was not detailed-, the increase in the frequency of public transport during peak hours, and cutting streets during entry and exit times for establishments with the largest number of students in order to avoid congestion of people.