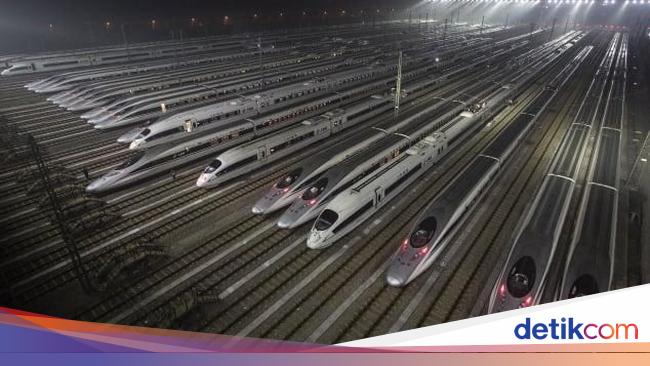 This is evidence of the extraordinary journey of the evolution of China’s high-speed rail network. The vast land area, the varied climate is not a stumbling block to connect the city with high-speed rail lines in no time. In fact, that route didn’t exist in the early 21st century.

In the past, Chinese citizens had to be patient when riding the train. It’s slow, the train is uncomfortable. In fact, China has a vast land area. To the point, traveling on the Shanghai-Beijing train is called a test of endurance.

But, that was then. Today, the picture of taking the train in China is very different. Beijing to Shanghai is now 1,318 kilometers away in 4.5 hours.

The country with the most populous population in the world already has a high-speed rail network. In fact, it is now the largest recorded in the world.

No less than 37,900 kilometers of high-speed rail passes through the Land of the Great Wall. Major cities in China have been connected by rail lines since 2008. Yes, it only started 13 years ago.

That is only half of the total planned route. There are still 3,700 kilometers of rail lines to be opened in the next few months of 2021.

With a maximum speed of 350 kph on most lines, intercity travel has changed. And the dominance of airlines has been broken on the busiest routes.

China’s ambition is to make high-speed trains the mode of transportation of choice for domestic long-distance travel. However, this new railway system is not just a means of transportation.

Much like the Japanese Shinkansen in the 1960s, they are symbols of the country’s economic strength, rapid modernization, growing technological prowess, and increasing prosperity.

For the ruling Chinese Communist Party and its leader Xi Jinping, high-speed trains are also a powerful tool for social cohesion, political influence, and the integration of culturally diverse territories into the mainstream.

It can be said that China is repeating the history of railways. The world of railroads in the early days of North America, Europe and European royal colonies was built with the same goal, namely connecting remote areas.

The development of the rail network in Russia, especially the Trans-Siberian Railway – Prussia, France, Italy and the British Empire, was influenced, among other things, by political and military demands as well as economic development.

However, the construction of the railroad took decades in the 19th century. And in the early 20th century China could reach it in just a few years.

China initially relied on high-speed rail technology imported from Europe and Japan. Global rail engineering giants such as Bombardier, Alstom and Mitsubishi are eager to work together, given the huge potential for the new market and China’s ambitious plans.

However, over the past decade, it is domestic companies that have grown to become world leaders in high-speed rail technology and engineering, thanks to their astonishing network expansion.