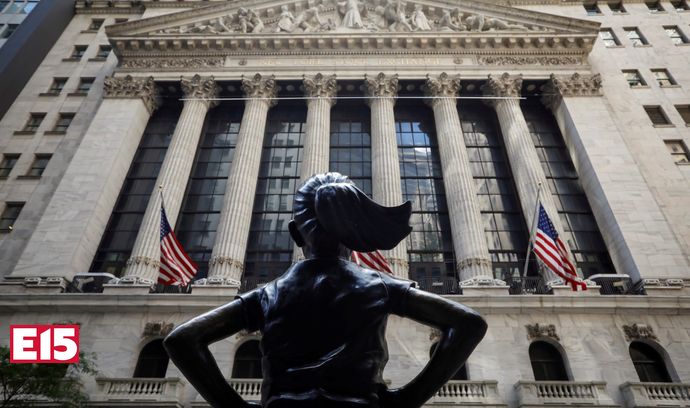 On the stock exchanges, it looks as if luck has turned against pandemic winners. Shares of Tesla have fallen by more than fourteen percent over the past month. Securities from the software company Zoom Video Communications are in a loss of over twenty percent in 2022. Online movie and series provider Netflix has weakened by more than 40 percent since last October.

“After the Fed’s announcement, however, all sectors declined, most of all technology and real estate. Relatively less then finances or energy. Overall, the shares of growth companies, which have great potential for sales growth but do not yet achieve quality profits, did not do well, “says Jan Šafránek, an analyst at Česká spořitelna, assessing the market decline.

“Current trade is dominated by nervousness. Skepticism alternates with buying euphoria, so that it will be different again in an hour, “says Michal Semotan, portfolio manager of J&T Investiční společnost. However, experienced stock marketers do not worry about the current fluctuations.

For example, US billionaire and Pershing Square Capital Management investment chief Bill Ackman has bought more than three million Netflix shares worth $ 1.1 billion in recent days. According to him, the markets ignore the long-term potential of the streaming giant.

“Many of our best investments have been made by other short-sighted investors throwing away great companies at prices that are extremely attractive if you can look ahead,” Ackman told the Financial Times.

Cathie Wood, a respected investor and founder of Ark Invest, spoke in the same vein this week. Although its main equity fund has weakened by 27 percent this year, Wood remains calm. “Many people associate volatility with risk. We use it as an advantage, “said the investor, adding that she continues to intend to bet on growing American companies focusing on technology, robotics, artificial intelligence and fints.

Some big players in the Czech Republic also recommend investing in discounted shares of otherwise successful companies. “For those of you who want to build a portfolio for the next five to ten years, great investment opportunities have just been created. We are already shopping and I expect to buy for a few more weeks, “wrote one of the richest Czechs, Ondřej Tomek, on Facebook on Monday.

Economic experts approached by the E15 daily agree with investors. “The current decline already offers interesting opportunities for the partial purchase of shares of established quality companies, but it is reasonable to keep a cash reserve for further purchases in the event of a further valuation correction that may occur,” says Šafránek. “After the current decline, I like shares of Microsoft, AMD, Twitter or Netflix, for example,” the analyst recommends.

“No one knows what awaits us, but the time to buy shares seems to be relatively favorable. Both Netflix and Amazon are an interesting choice, but even more attractive prices can be seen at smaller technology companies. I also like American banks focused on retail clients, “adds Jiří Tyleček, chief analyst at XTB brokerage company.

According to portfolio manager of Cyrrus brokerage firm Tomas Pfeiler, shares of technology giants are the right choice in the long run. But it is necessary to choose carefully between them.

“Google and Microsoft, for example, seem like interesting titles. Not so much Netflix. Although its shares have fallen sharply, this is a legitimate slump. Netflix’s competitors are growing from other streaming platforms, and players in this sector need to invest heavily in new content. This has reduced Netflix’s operating margin, ”says Pfeiler.

Personally, he would prefer some titles related to tourism. “With the calming situation calming down, we will hopefully see a return to normal this year. Disney or chip makers, for example, are at interesting levels. Producers of luxury products are also attractive, ”Pfeiler calculates.

Investment adviser Tomáš Geissler also urges caution in the case of technology companies, as the change in the central bank’s monetary policy will have the greatest impact on them. “By contrast, the sectors that can benefit significantly from the current situation are healthcare, consumer goods such as food, beverages, hygiene, as well as electricity, water and gas distributors,” says Geissler. He would invest in the shares of the coal company Peabody Energy, for example, this year.

Semotan from J&T is even more cautious. “Everyone has their preferences and favorites, I would not dare just recommend. We strengthen our positions in the portfolios in Facebook, Airbnb, Alibaba, and at home in domestic banks, and in Europe we focus on the purchase of Volkswagen or the downed EDF, “reveals Semotan.

Why the world is struggling with high inflation

Analysts agree that stock indices may not have bottomed out, and market volatility will continue to be highly volatile, especially in the first half of this year. In addition to the Fed, which could raise interest rates up to five times this year, the current geopolitical tensions in Ukraine may also speak to market behavior.

“The second half of the year could be better as markets become more acclimatized to tighter monetary policy,” Šafránek concludes.

Increase in gasoline, prices never so high since 2013: “A drain”