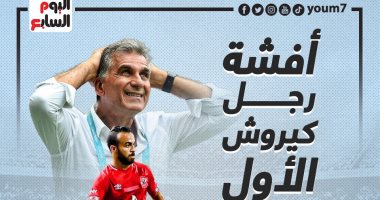 The Egyptian national team is preparing for a new challenge with the Portuguese coach, Carlos Queiroz, when the Pharaohs meet with the Sudan national team at six in the evening, Saturday, in the second round of the group stage of the Arab Cup championship, which is currently being held in Qatar and ends on December 18..

The Egyptian national team enters today’s match armed with an unbeaten record with Carlos Queiroz, who played 6 matches with the national team, during which he achieved 5 victories and drew one time. As the best player in the team under the leadership of the Portuguese, despite his exclusion by Queiroz in the first official match of the Pharaohs against Libya in the World Cup qualifiers.

Afsha is equal with Mohamed Sharif, his colleague in Al-Ahly, with two goals, which he scored against Liberia in the friendly match that was held on September 30, but Afsha excels in assists and scored two goals from penalty kicks, the first against Gabon in the World Cup qualifiers and the second against Lebanon in the Arab Cup.

Queiroz is expected to start today’s match against Sudan with a formation consisting of: Mohamed El-Shennawy in goalkeeping, Akram Tawfik, Ahmed Hegazy, Mahmoud El-Wensh and Ahmed Fattouh in defense, Amr El-Soulia and Muhannad Lashin in the midfield, and in front of them Mohamed Magdy Afsha, Mohamed Sharif, Mustafa Fathi and Osama Faisal.

Egypt is ranked second in the group with 3 points behind the leaders Algeria with the same balance, while Sudan is in the fourth and last place without points..

The Egyptian team enters the match with the motive of winning and bypassing Sudan, to crowd out Algeria for the top spot, after defeating Lebanon with a clean goal in the first round. On the other hand, the Sudanese team plays the match after receiving a big defeat from the Algerian team by a clean four, and will try to reconcile its fans by defeating the Pharaohs.

No HIV-Covid-19 Patients Found in Wonogiri