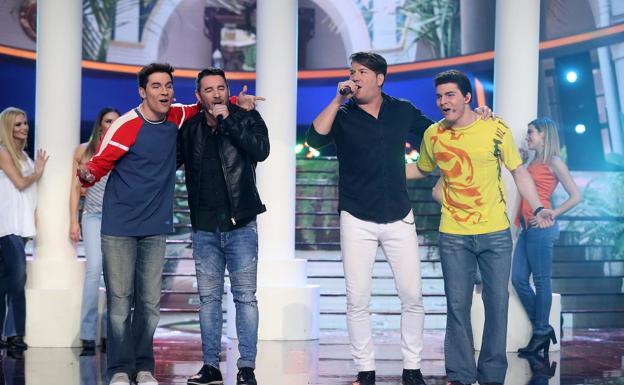 The magic of ‘Your face is familiar to me’ from time to time, the imitated coincide with the imitators and magic flows. It was the case of the Gemeliers, who had to embody Andy and Lucas sharing stage and song with the originals. And they did so well that they conquered the evening. “It is one of the best imitations of the night,” Carlos Latre pointedly pointed out, and Ángel Llácer wanted to add praise: “Such good energy has been created among the four …”. Lolita took advantage of the moment to reveal that she met the Cádiz singers when they started and did so because her daughter, Elena Furiase, was a true fan of the duo.

Jorge González never disappoints and at the gala he reaped compliments again, this time tucked into the skin of Maroon 5. “You start playing in another league now,” Chenoa warned, expressing his admiration for the boy. “I am impressed because you have done pure magic,” said Llácer enthusiastically. Although the one that really surprised the judges and the audience was Mario Vaquerizo. The artist wanders between good and evil constantly, achieving flattery or criticism depending on the day. On this occasion he was right to emulate Andrés Calamaro. “You were not Mario since you entered, today you would have to win this gala,” said Llácer, and although the prediction did not quite materialize, the score was remarkable.

Nerea Rodriguez she had a great time transforming herself into Natalia and having the invaluable help of the real ‘triumph’ in her training. “You’ve done great,” the teacher confessed to him. And Chenoa praised, above all, the complex choreography that the girl solved with art. The one that had it worse was Cristina Ramos, who was entrusted with the mission of becoming Melani, the last Spanish representative at Eurojunior. And taking off so many years at once was not easy. “You have achieved the mechanics, but not the imitation,” Chenoa appreciated. Rocío Madrid He also had company on stage. The actress acted alongside Vanesa Martín and Lolita ended up crying. “It is the first time that I get excited in this edition,” he revealed.

The last positions in the table fell to María Isabel, Belinda Washington and El Monaguillo, a regular by the tail. The first imitated with Mabel. “You have a thicker voice than she does, but you’ve done quite well,” Latre ruled. Belinda was Dalida and sang that of ‘Gigi L’amoroso’, although without much success. And the comedian, who more than imitated parody, got into the skin of Two Man Sound and started laughing, although not stitches. “You are like the stretcher-bearer of a madhouse,” Latre evaluated with a laugh.

The next week There will be curious coincidences on the Manel Fuentes set. Vaquerizo had to play Samantha Fox and Sabrina, and for this he will take his wife, Alaska. And it turns out that the altar boy has been commissioned to imitate that of ‘Who cares’. Disturbing. Belinda will be Natalie Cole; María Isabel will emulate Merche; Cristina Ramos, to Paloma Faith; Jorge, to La Barbería del Sur; and the Gemeliers will transform into Billy Ray Cyrus and Lil Nas. Nerea was pleased to get into the skin of the legendary Carmen Sevilla, but Rocío Madrid stole the character and the young woman had to shoot again. This time he got a movie character: Elsa, from ‘Frozen’.

Coronavirus: PSG will no longer train until at least March 22

Why do the wives and daughters of Sheikh Mohammed of Dubai keep trying to escape?