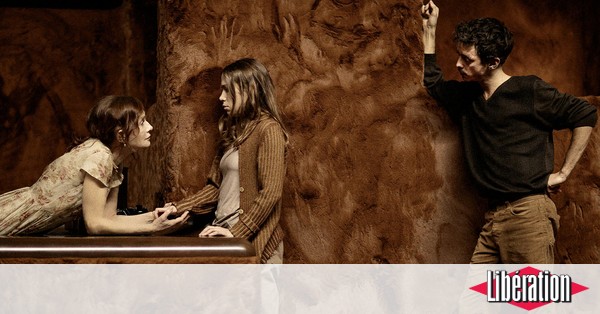 It is a fur case in squirrel tones, a decor that looks like a doll’s house without furniture, the pile of the carpet is silky, the whole is at the same time ugly and engaging, luxurious and hideous. On the walls and the low ceiling, also covered with fur, are graffiti all kinds of faces. Someone may have practiced these charcoal sketches a long time ago, and we are obviously thinking of the absent father. There is no window, no opening, except for a staircase which gives access to the outside. These are three people confined to a cellar, or rather a burrow, but not just any; the space has the poisonous and tenacious sweetness of a childhood memory.

You don’t get out of the family, or never completely, that’s what it says the glass menagerie, play on the painful memory of a vain energy, first success of Tennessee Williams in 1944, and strange and experimental drama if there is: it does not tell anything. Nothing other than the memory of a disappointment, the story of a sagging mental gait, like the two actors (Justine Bachelet and Nahuel Pérez Biscayart, discovered in 120 beats per minute by Robin Campillo) who play Laura and Tom, the kids, and keep crumbling on this carpet, which has become spongy because it has started to rain and everything is leaking, all oozing, memories can also rust.

A young man must come, a “gallant”, as the mother says, Amanda (Isabelle Huppert), who repeats this obsolete word all over the place. She speaks at full speed, gets carried away, tells that when she was a young girl, at the time of her splendor, she received up to seventeen “gallants” the same afternoon, that there was not enough seats, that it took “Send the negro to the parish house to borrow folding books”. Slavery had just been abolished, it was in this world that Tennessee Williams was born in Columbus (Mississippi), in 1911. The play projects us into a family close to his: a sick sister, a mother exhausting and dreamy, and he, the narrator, who flees to the cinemas – or perhaps elsewhere, at night. The hopeful “galant” Amanda is not for him, she doesn’t know him, but she is already planning to marry him with her diminished daughter. The longer it takes to come, the more it is certain of this union, rejoices, and the more it bricks and tidies up its cellar, its burrow, its case.

These are three solitudes, therefore, locked in the closet of their obsession, in the memory bubble of the narrator-brother-son-alter ego of Tennessee Williams and a spectacle that evolves favorably in the memory, as if the emotions it conceals took their size after the performance. Who ignores the explosion of murderous illusions and their more or less wobbly reconstruction, because we have to keep going? Isabelle Huppert, in the dress of a young girl, excels in desperate vitality, a whirlwind that cannot stop without falling apart. At the beginning of the piece, everything is (rather) good: she prepares a real chicken in the pot, which she quarteres and presents to the public before launching it into a shiny copper pot with her celery, and the detail is in the copper gleaming for a fictional dinette.

In this piece on remembrance, the actress composes other roles with body memory – laughter and hand games by Bob Wilson, vitality of the postwoman in ceremony by Claude Chabrol. The actress gives Amanda cracks that get bigger and bigger, and the more they get bigger, the more energy rises, the more Amanda becomes suffocating, eats the space she offers to her children.

Then, lull, it disappears. Splendor of Justine Bachelet, when she finally speaks, as fragile as the glass statuettes she collects and in which her world is reflected. Brother and sister embrace, they breathe. Laura is not just her mother’s object, she has a will, she doesn’t want that “gallant” (Cyril Guei, also wonderful) that her brother met in the warehouse that employs her. Not of this “gallant”, with whom she was in love in high school, and who shatters the fragile constructions of this doll’s house by its very reason. The excellent idea, perceptible from the start of the play, is that it is not the girl who is deficient, but the look on her, and which makes her madness.

The soundtrack is made up of American standards from the 1950s, contemporaneous with the birth date of Ivo Van Hove. You could think of a radio that never stops. A black curtain falls at each sequence, transforming the decor into a catafalque, and canceling the passage of time. There is the sound of raindrops in the hastily placed cans, and the shadows of the figures hugging and fusing on the wall. There is the prolific Belgian director who is digging, across the world, the furrow of the myths of popular America of the 1950s – after Seen from the bridge, Arthur Miller, whom he presented at the Odeon in 2016, and West Side Story, premiered in New York during rehearsals in Paris of Williams’ play. Without counting, in April, the placement of Who killed my father by Edouard Louis, in Amsterdam. It’s too much ? Paradoxically, a certain fragility of the gesture, which will undoubtedly become clearer over time, is also what reinforces this ode to vulnerability.

Calixto Neto on a “Samba” nerve