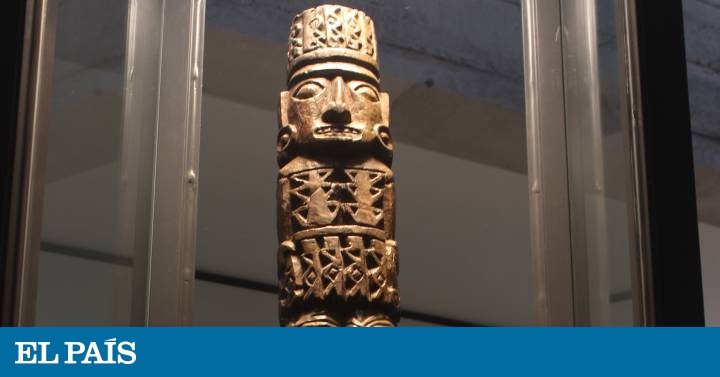 Pachacámac, or “creator of the Earth”, was a god capable of predicting the future, revered by the Inca Empire in the Andes (Peru). Yellow, red and white are at least three colors with which, between the eighth and ninth centuries, the Wari civilization painted a sturdy wooden statue of more than two meters as a symbol of worship of this idol. The polychromy identified on this icon of Peruvian archeology is today the only example identified with such a variety of colors, according to the study that It is published this Wednesday in the scientific journal PLOS ONE.

In the past, several researchers thought that the figure had only one color and was made of the same wood (Pouteria lucuma) that the rest of the works of the Pachacámac archaeological sanctuary, former center of devotion of 450 hectares located 30 kilometers from Lima on the Pacific coast. The idolized figure for more than 800 years, however, follows patterns that differ from other objects.

To begin with, this statue should have disappeared during the conquest of Hernando Pizarro in 1533. The Spaniards denied its importance, compared the sacred oracle with the devil and wanted to destroy the vestige. Marcela Sepúlveda, researcher at the molecular and structural archeology laboratory of the University of La Sorbonne (LAMS) and the main author of the project, explains that the conquerors did not understand that “a piece of dirty wood could be venerated in a dark room”. The scientist indicates that you can’t really know what happened. “What is clear is that this object was preserved and idolized for 800 years, which is an incredible fact confirmed today,” he adds.

Is he really the idol of Pachacámac? Discussions persist and new hypotheses are drawn. In 1938, among the rubble of the Painted Temple, a carved wooden figure with iconographic motifs assimilated to divinity was found and immediately identified as this idol that was believed to have disappeared.

New research has discovered that this idol has novel and unexpected characteristics. What was initially interpreted as blood has turned out to correspond to traces of paint that are still there. “Is incredible. We can say that it is the only case of polychromy on wood in a sacred object of such relevance and of those discovered so far, ”Sepúlveda continues. “This polychrome practice was more common in other supports such as murals, metals or fabrics. It is scarcely known in icons like these, ”he says.

Radiocarbon dating is also an advance for the study of Peruvian heritage and has allowed us to confirm the hypotheses about its age. To do this and also perform their taxonomy, archaeologists have extracted a wooden sample from a hole in the bottom of the statue. On the other hand, the analysis techniques used by the researchers of the CNRS (the French National Center for Scientific Research), from the Sorbonne University and other French institutions, constitutes a novel methodological contribution as it is not invasive and destructive. With a microscope and several X-ray fluorescence techniques, in addition to red, they identified the pigments used in the white teeth of a character and the yellow strokes of headdresses.

The story of an exclusive mineral

White and yellow, colors also used on the walls of the Painted Pachacámac Temple, were produced with the mineral pigments available around the place. Red pigments come partly from cinnabar, a bright mineral that contains 85% mercury and 15% sulfur and is associated with the political and economic power of those who used it. “We were very surprised to find this element since it is a very precious and very inaccessible pigment, whose use was limited to certain groups of individuals,” says the expert. Cinnabar is uncommon in the geology of the Andes and is located about 380 kilometers from Lima in the Huancavelica mine.

Before that, cinnabar had been found in other archeological contexts in Pachacámac and sites in Los Andes since about 1500 BC. It was used to decorate wood, metal and other wall paintings. Later, during the time of the Incas it was used on certain occasions as body painting by elite members and warriors who wanted to appear more terrifying. In Pachacámac, this mineral had already been observed inside textiles and on funeral masks.

Peter Eeckhout, professor of pre-Columbian archeology at the Free University of Brussels, ensures that exchanges have existed for a long time between the highest social classes of different locations. “It is very interesting that they used cinnabar but it does not surprise me either. For example, we have already found in Pachacámac bird feathers from the Amazon, that is, more than 1,000 kilometers away,” he says.

For Eeckhout, any discovery about the artistic practices of this era are essential to understand the past because there are few vestiges in the hands of archaeologists. “The idol of Pachacámac is clearly exceptional and its bright colors give new information about ancient art,” he concludes.