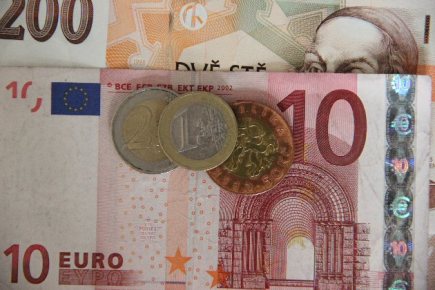 Prague – The Czech currency weakened on Thursday after strengthening against the euro and the dollar on Wednesday. At 5 pm, the koruna depreciated by five pennies against CZK 24.69 / EUR and CZK 22.44 / USD compared to the previous conclusion against both major world currencies. This follows from the data on the Patria Online server. The Prague Stock Exchange wiped out part of Wednesday’s losses. It has grown for the sixth time in the last seven days.

After the start of the Russian attack on Ukraine, which began on February 24, the koruna first weakened sharply. However, after the Czech National Bank announced on March 4 of the start of interventions in the foreign exchange market against the weakening of the Czech currency, the koruna strengthened again and has been fluctuating in recent days.

“The weakening of the koruna today was also helped by the publication of consumer confidence in the Czech Republic, which fell sharply, reaching its lowest level since 2013,” said Purple Trading analyst Jaroslav Tupý.

According to data published today by the Czech Statistical Office, confidence in the Czech economy fell again in March after two months. It decreased by 2.6 points month-on-month to 96.6 points. Consumers and businesses alike are more pessimistic.

The PX stock index added 0.68 percent to 1,349.46 points on Thursday. The actions of Česká zbrojovka, which today published last year’s economic results, were the most successful. Moneta Money Bank, on the other hand, lost. This follows from the data of the stock exchange website.

The financial sector traded mixed. Moneta depreciated 0.33 percent to CZK 89.60 and the insurance company VIG 0.09 percent to CZK 584.50. On the other hand, Erste Bank improved by 1.24 percent to 817 crowns and Komerční banka by 0.59 percent to 859 crowns. “Both banks grew despite the negative sentiment that prevailed in Western European banks,” Boháč said.

The shares of the energy company ČEZ hovered around 865 crowns most of the day. About an hour before the end of trading, however, they started to grow more and eventually strengthened 1.45 percent to 873 crowns. Technology company Avast also added more than one percent.

Lithuania must prepare for total national defense at all levels, the president declares