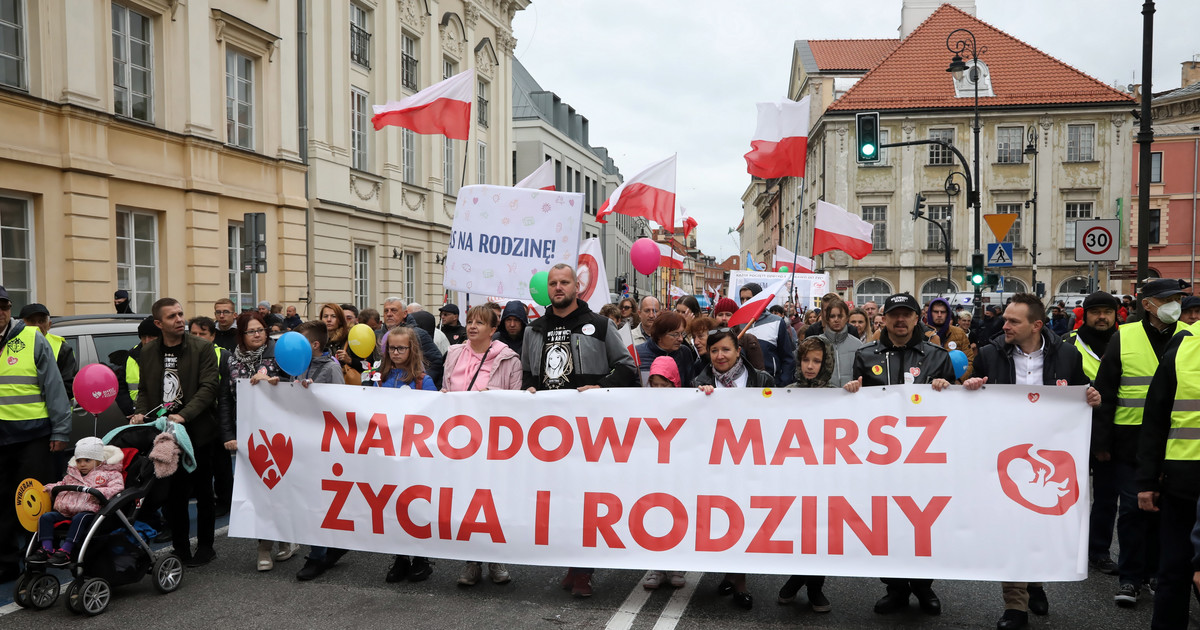 In the morning, the President of the Republic of Poland, Andrzej Duda, met with the organizers of the march. – We presented our postulates, expectations related to the necessity to defend life and family – said Paweł Ozdoba, the president of the Center for Life and Family.

Due to the restrictions still in force, this year the formula of the demonstration was changed. There were no marches in over 140 Polish cities, but one in the capital – the National March of Life and Family.

The participants of the event were greeted by the chairman of the conference of the Polish Episcopate, Archbishop Stanisław Gądecki. “I greet all participants of the March for Life and Family, which takes place in Warsaw under the slogan: Dad – be, lead, protect! Let Bl. card. Wyszyński and Bl. Mother Czack, support in showing that everyone has the right to life, and the family is the most precious good of humanity, “wrote Archbishop Gądecki on Twitter.

“A strong man is needed by all society”

Referring to his slogan “Dad – be, lead, protect”, Paweł Ozdoba noted that “a responsible and strong father and a strong man are needed not only by the family, but also by the whole society”.

He added that recently “there are various kinds of social and political initiatives that hit the family, the institution of marriage, as a union between a man and a woman.” As an example, he pointed to the recent resolution of the European Parliament, which – as he assessed – “leads de facto to force EU member states to adopt appropriate solutions aimed at legalizing the so-called homosexual marriages”.

He recalled that the Constitution of the Republic of Poland defends marriage. – We want to remind politicians that they have a serious task to accomplish, because they, as guarantors of our safety, are responsible for the safety of families, the security of marriage, as a relationship between a woman and a man – indicated Ozdoba.

He noted that the march is also an opportunity to demonstrate pro life values. “Life must be fully protected from conception to natural death,” he said.

He added that the march is also a time of thanksgiving for the beatification of Card. Stefan Wyszyński. – So often the Primate of the Millennium was called the “Father of the Nation”, hence the connection. We wanted to show that Polish fathers are responsible. We want to send a signal not only to the whole of Poland, but also to the whole world that there are men in Poland who take responsibility that they do not run away from it, said Ozdoba, opening the march.

He said that the Center for Life and Family launched the “Father’s Day Again” campaign a few months ago. He explained that its purpose is to shift the celebration of Father’s Day from June 23 to March 19, when the liturgical celebration of St. Joseph the Spouse of the Blessed Virgin Mary.

– The current date is in no way related to the cultural or historical context – said Ozdoba. He also noted that on March 19, Father’s Day is celebrated, for example, in Italy, Spain and Croatia. “At the moment, over 30,000 people support this campaign” – Ozdoba added, encouraging participants of the march to sign the petition.

Sankowska-Grabczuk: I want my children to be proud of Poland

Lidia Sankowska-Grabczuk from the Christian Social Congress, which is the co-organizer of the march, said that “it is not the authority that advocates the right to life and the birth of a child in Poland, but each of us who came here”.

She emphasized that it is necessary to take care in which society, in what country, in what world the young generation will grow up.

Fr. Tomasz Kancelarczyk from the Małych Feet Foundation noted that care for the unborn life is expressed primarily in the spiritual adoption of a conceived child. – Then we are an army of people of prayer, a spiritual strength that has the power to defend life – said the priest.

He pointed out that “you must be blessed with a woman and accept this blessing upon yourself, even if it is difficult”. He added that Mary is a great support on this journey.

At noon on Sunday, the National March of Life and Family started from the Castle Square in Warsaw, with banners proclaiming the value of life, white and red flags and colorful balloons. Parents carried small children in prams. People with disabilities were also walking. They were, among others Knights of Columbus, Knights of John Paul II and Warriors of Mary.

During the march, fragments of the statements of Bl. card. Stefan Wyszyński, devoted to the value of human life, procreation, family and responsibility for the shape of the country. – The school must be national, the school must give children and young people love for the homeland, culture: home, family and national – quoted.

The following slogans were also chanted: “What good begins, where the family begins”, “Let’s protect the family”, “I love dad, I love mum – I have a bar to my parents”, as well as “Politicians – do you hear – defend families, defend life” .

People with LGBT flags stood in the vicinity of the gate of the University of Warsaw.

After the march, its participants took part in the Holy Mass. in the basilica of St. Cross, during which the homily was delivered by Fr. Dominik Chmielewski.