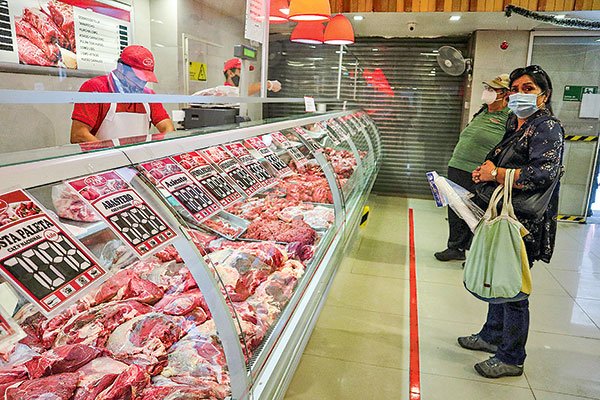 Financial operators surveyed by the Central Bank expect inflation within a year to be 4.4%. In two years it will continue to be above the goal and would stand at 3.5%.

The greater inflationary pressures will bring other strong adjustments to the interest rate, according to the expectations of financial operators reflected in the consultation made by the Central Bank last week.

According to the measurement carried out between September 15 and 16, among those who make investment decisions of national and foreign financial entities that operate in the local market, the Consumer Price Index (CPI) is expected to register an increase of 0.8%, which was two tenths more compared to what was forecast in the August consultation.

For October they made an adjustment in the same direction and now they project a 0.6% monthly increase. In November, the trend of the indicator would moderate with a rise of 0.3%.

With this, within a year they assume that prices will rise by 4.4%, which compared to what was foreseen in the prior consultation implies an additional four percentage points.

At Fynsa, they also made modifications to their forecasts. For the ninth month of the year, they assumed an increase of 0.7% in the CPI compared to August.

“The adjustment we made this week is basically explained by the increase in beef,” said the entity’s chief economist, Nathan Pincheira.

Added to this, he commented, are other “minor increases, but of almost equal importance in incidence” in the indicator, such as the contributions that gas and gasoline are expected to make.

See also  Is Biden anxious about inflation? American salary growth is eaten up! "Made in China" may be the antidote?Anchor Lai Jiaying｜【Money Line Express】20211111｜Extraordinary News-USTV Extraordinary TV

In the opposite direction, they are betting on a fall in the prices of bread and cereals along with dairy products and alcoholic beverages according to the monitoring they do weekly.

With this, Fynsa expects inflation to accumulate 3.8%, while in twelve months it will be at 4.8%.

In this scenario, the EOF reflects that within two years inflation would continue to be five tenths above the Central Bank’s goal, that is, at 3.5%, which is in line with the forecast made in the August survey.

Towards the neutral rate

Faced with this picture, the experts aligned themselves with a path of increases for the Monetary Policy Rate (MPR) that in March would already leave it at its neutral level of 3.5%.

In the September Monetary Policy Report (IPoM), the issuing entity’s scenario stated that this value would occur in the middle of the first semester.

In October it would go from the current 1.5% to 2.25%, replicating the magnitude of the last Monetary Policy Meeting. In December, the increase would be 50 points to leave it at 2.75% and in January at 3%.

Regarding the exchange rate, traders expect it to be at $ 780 in the next seven days and at $ 785 at 28 days thereafter.