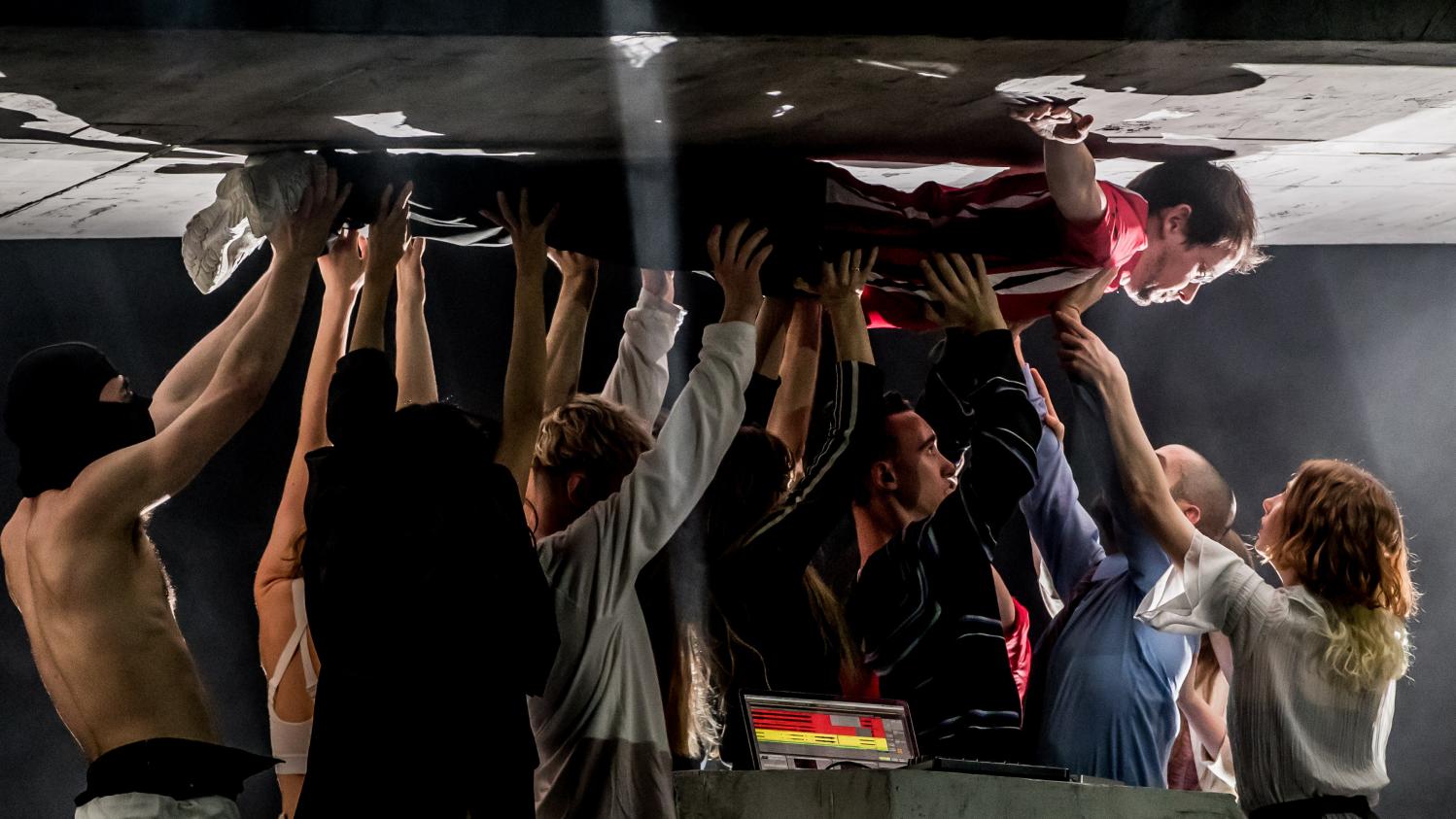 The electronic musician Rone allied with the collective of choreographers (La) Horde presents at the Théâtre du Châtelet a creation for the new national ballet of Marseille. “Room with a view” is a political spectacle about the future anxiety that today’s youth have to deal with. We saw it for you.

It is a thing understood, our ultra-liberal and ultra-technological civilization is dying. The links between beings are falling apart, each for himself becomes the norm. In these times of predicted collapse, the violence of society extends its grip even to the body. How does youth live these twilight times? Should she, can she, stand up against this iniquitous legacy?

For their very first creation at the head of the Marseille national ballet, of which they took the reins in September 2019, the three choreographers of (La) Horde, Marine Brutti, Jonathan Debrouwer and Arthur Harel, known in particular for their work with Christine and The Queens have teamed up with electronic musician Rone. With Room with a view, the quartet plunges us head first into the brutality of our time, through the prism of youth.

“We imagined a cloudy space capable of revealing the paradoxical beauty of chaos“, explain Rone and (La) Horde. They propose with this show to show how could spring from the collapse in progress a new imagination fed with the sap of youth. What re-open the field of possibilities shrunk by fear , hatred and suffering and make room for “political utopias that try to reinvent the world“.

On stage, this first translates into a massive cube of raw concrete with a few steps. At the heart of this cube, a club where bodies let loose on the techno rhythms of a DJ. Nothing joyful about it. The music is hard and threatening, the bodies are tense, exhausted, the trance appears as a necessity. Each one dances for himself, in apnea, on this white noise of apocalypse which makes twist to the plexus of the spectators. A few couples are forming, inside and outside the club, but they are poisonous and tear apart, while columns of sand shoot out from the hangers, like warning shots that are getting closer and closer.

In a long game of attraction and rejection, the dancers will then crudely evoke violence, up to rape and murder, via desperate hand-to-hand combat in which love competes with hatred, in a cycle of endless reciprocity. In a noxious climate, a sticky nightmare in chiaroscuro against a backdrop of stormy sounds, men and women, haggard, seem reduced to the state of wild beasts without faith or law. Then suddenly, in a terrible crash, it collapsed. The cube is falling apart. Heaven spits hundreds of dead fish.

A little later, the dancers brighten up and then gather in slow motion, forming a swarm in which takes refuge a frantic dancer, at the wrong time, for a stunning rendering. A DJ table, where the electronic musician Rone continues to officiate, is carried by the crowd. Like a shaman, he will magnetize the rave dancers again. From there, the show changes vibration and gives rise to extraordinary physical performances, almost circus, which leave the jaw hanging – a wonderful dancer, a kind of wisp of green socks, of incredible elasticity, while graceful and in madness, particularly blew us away.

The light, yellow and solar returns slowly and with it, cries, like chirps of birds, playful, laughing. The music remains tense, we even think very strongly of My Bloody Valentine, but the dancers show themselves, the disorderly excitement of a playground. The early climate of despondency gives way to joyful chaos. An inclusive round, where everyone voluntarily fits in gradually, can be improvised. The rediscovered unity makes it possible to awaken consciences and launch the insurrection, fists and raised adults: a future is possible. The ceiling of the Châtelet lights up, while everyone is singing together.

Two things particularly struck us in this show. First, the heterogeneity of the bodies of this new national ballet from Marseille, composed of 18 dancers from twelve different nationalities. As the science fiction writer Alain Damasio writes in the show booklet, in this troop “the jewels come from everywhere. There are rubies and sapphires, veined lapis lazulli, mat garnets and jasper, amber and granite“Large and small, strong or fragile, flexible or massive, round or angular, this wide variety of profiles is the strength of ballet. In any case, it is edifying in this creation.

Furthermore, the electronic musician Rone was well inspired to invite (La) Horde to work with him for this white card offered by the Théâtre du Châtelet. The dancers and the musician create a perfectly organic and symmetrical collaboration, hand in hand. No one takes precedence over the other, the music blends harmoniously into the choreography, becomes one with it, accompanies the gestures without highlighting them and imposes its climates without ever playing its part solo. The political message deployed here is not an empty word, it seems tested, it feels the experience: all for one and each for all.

Room with a view by Rone and (LA) HORDE, at the Théâtre du Châtelet until March 14, 2020. (Regarding the provisions relating to the coronavirus, the Châtelet Theater indicates that performances are maintained but reservations are closed – consult the theater website).