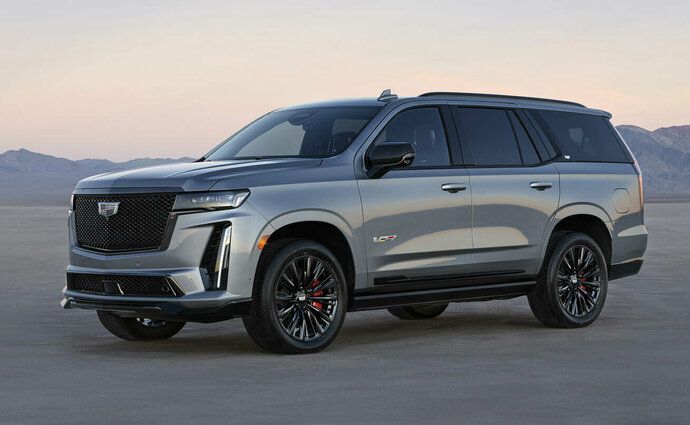 The most powerful production engine in the car manufacturer’s history offers 682 horsepower and will shoot this cathedral on wheels in less than five seconds.

Cadillac boasts a new exclusive Escalade-V model that promises brutal performance, a modified chassis, an even greater level of luxury and also some of the “best” for both the car and the whole segment. But let’s start small.

The new Cadillac Escalade-V, which will offer three rows of seats as standard, will be available in both the classic wheelbase (3071mm) and the extended 3406mm ESV. The price starts at $ 149,990 (about 3,650,000 CZK), making Escalade-V the most expensive production model of the brand.

The driver of the car is the most powerful full-size SUV that the automotive industry can offer today. One reason should be the fact that Dodge has already stopped producing the Durango Hellcat extreme. Regardless of the marketing rhetoric, however, the Escalade-V is a very interesting car.

Under the hood, it has a hand-assembled 6.2-liter V8 engine, supercharged by a compressor that sends power to all wheels via a ten-speed automatic transmission. Many may remember the Cadillac CT-5V Blackwing, which is equipped with a similar engine, but the Escalade-V got a larger compressor that offers higher boost pressure.

Due to the modified engine, the manufacturer had to modify both the ten-speed transmission and the torque distribution system, which normally distribute power evenly between the two axles. In unspecified conditions, however, the car is able to send up to 67% of the power to the rear axle, which would make sense, for example, during rapid acceleration, when the weight moves backwards.

Along with the installation of a more powerful engine and propulsion train modifications, the Cadillac Escalade-V also received fourth-generation GM Magnetic Ride Control shock absorbers and Adaptive Air Ride suspension, which will be available only for the Model V. Rear air suspension should be. be specially adjusted and stiffness of the machine helped with the transfer of power to the asphalt.

In addition, with regard to the new capabilities of the car, technicians have redesigned the driving modes, which adjust the behavior of the steering wheel, chassis, engine and all-wheel drive system. Travel, sports or snow / ice mode are available. Despite the brutal performance, the Cadillac Eslacade-V does not attempt to give the impression of an extra sports car to its crew. It depends primarily on comfort, luxury and rich technological equipment.

For example, the crew has screens with a total area of ​​up to 38 inches, which should have up to twice the pixel density compared to 4K TVs, according to the manufacturer. One such display is a 14.2-inch digital instrument panel with augmented reality navigation technology.

The car’s exterior is impressed with the slightly redesigned bumpers as well as a new radiator grille and a black Sport Mesh grille, which is a traditional feature of the V-models. Then the four valves come out quite discreetly from the rear bumper.

Cadillac Escalade-V is expected to go on sale this summer and is said to be a limited range. However, the manufacturer has not yet revealed the price or number of pieces planned.