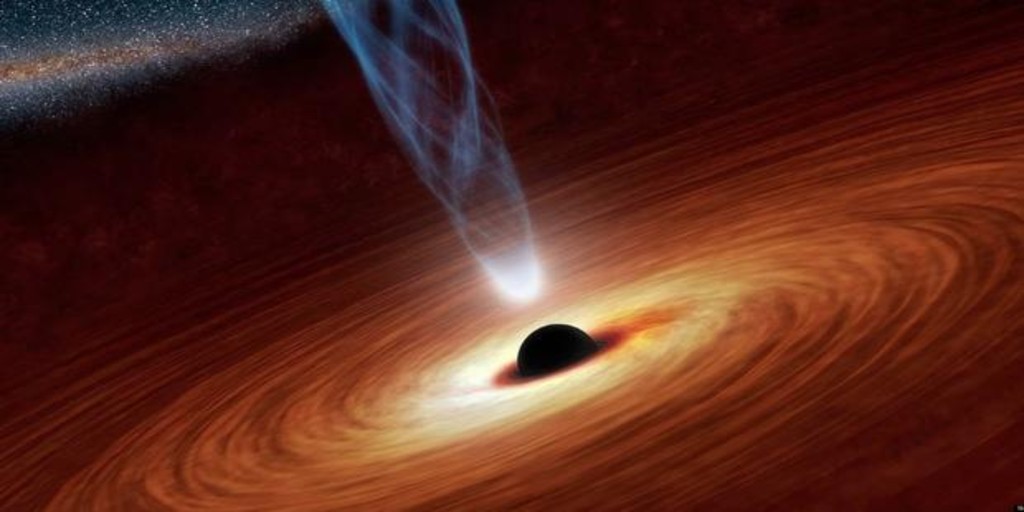 An international team of astronomers has just revealed the existence of the supermassive black hole oldest and most distant found so far, and it turns out it points its bright, energetic stream of particles directly towards Earth. That is, it is a “blazar”.

Called PSO J030947.49 + 271 757.31, it is the most distant blazar ever observed. Blazars are the brightest type of supermassive black holes out there. They are found in active galaxy centers, with high levels of luminosity and electromagnetic emissions, caused by the intense heat generated by the dust and gas particles that swirl in the accretion disks around the black hole. The Blazars, moreover, constitute a unique class of active galactic nuclei, which spit from their poles and in opposite directions two narrow jets of “relativistic” matterthat is, it travels at speeds close to the speed of light.

But the term “blazar” does not apply to all supermassive black eaters alike. In fact, it’s reserved only for those whose jet of radiation points to Earth, which makes it possible for astronomers to identify and analyze them in more detail.

“The light spectrum that appeared before us,” he says. Silvia Belladitta, an astrophysicist at the University of Insubria in Italy, and first signatory to a study recently published in Astronomy & Astrophysics– First confirmed that PSO J030947.49 + 271757.31 is actually an active galactic nucleus, or a galaxy whose central nucleus is extremely bright due to the presence at its center of a supermassive black hole fueled by the gas and engulfing stars. In addition, the data obtained also confirmed that it is very far from us, with a record redshift value of 6.1, something never before measured for a similar object. ” (The wavelength of light from an object moving in space shifts red when the object is moving away from us, and blue when it is moving closer. This is how scientists manage to measure the distance of light emitting sources in the Universe).

Based on those data, the researchers determined that the light we can currently detect was issued by the blazar in question almost 13,000 million years, which means that this gigantic black hole, whose mass is equivalent to a billion suns, already existed at a very early stage in the Universe, when it was still less than a billion years old. Thousands of blazars have been found so far, but the exceptional distance and age of PSO J030947.49 + 271757.31 make it an almost unique object.

Of course, it is quite possible that there are many more similar “monsters” that are even older (and more distant) than this one. But, as stated, they could be invisible to us by the mere fact that their particle beams do not point towards Earth.

“Observing a blazar is extremely important,” explains Belladitta. For every such source we discover, we know there must be another hundred similar, but most are oriented differently and, therefore, they are too weak to be seen by us ».

The very fact of having found PSO J030947.49 + 271757.31, therefore, is telling us that these powerful and enormous objects already existed in the early stages of the Universe, and probably in large numbers. The researchers admit that more observations are needed to try to figure out how large this hypothetical population of large black holes could be. In any case, it will now be necessary to explain how it is possible that these enormous dark objects could have formed at such an early stage.

“Thanks to our finding,” concludes the researcher, “now we can say that in the first billion years of the Universe’s life there were already a large number of very massive black holes that emitted powerful relativistic jets. And this result imposes strong restrictions on the theoretical models that try to explain the origin of these enormous holes ».

Applications to hang out during coronavirus quarantine