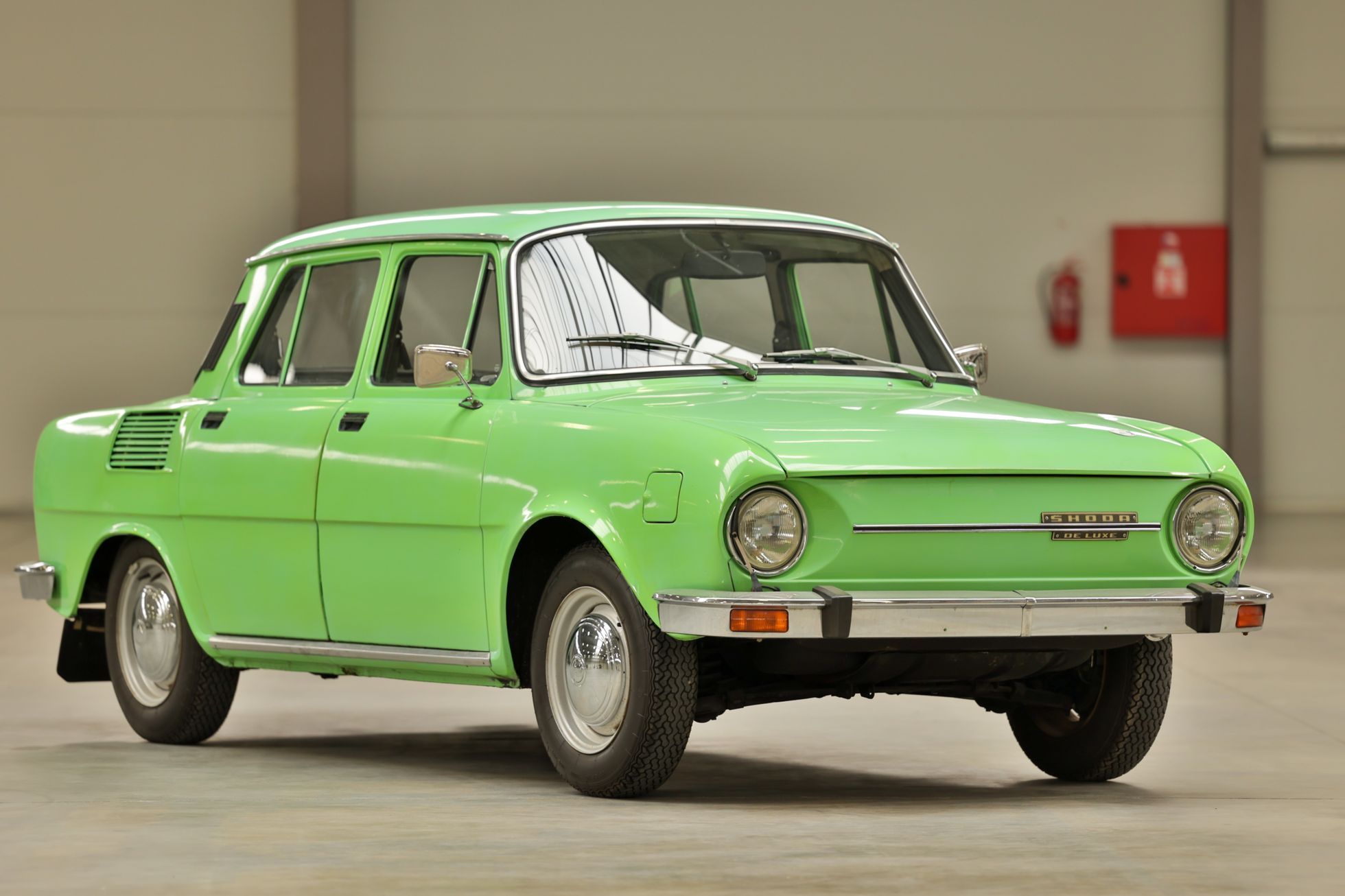 The prices of historical Škoda cars have been rising in recent years, and giving several hundred thousand crowns for a “hundred” or “embéčko” is not unusual. Nevertheless, the price of the auctioned Škoda 100 de Luxe last Sunday surprised everyone. The green sedan from 1974 was sold in Lysá nad Labem for 1.85 million crowns.

“We believed that we would beat the one million crowns mark,” says Pavel Kočí, organizer of the Retro Garage event at the exhibition center in Lysá nad Labem, where the car auction took place, about the green Škoda 100. “The resulting amount surprised us all. It’s absolutely unique,” he admits. The Škoda 100 L, a better version of the de Luxe, from 1974 was finally sold for 1.85 million crowns, the starting price was 350 thousand crowns and the auction reserve, ie the minimum selling price required by the seller (in this case from the Czech Republic), climbed to 800 thousand crowns.

You probably won’t find much more expensive historical models from Mladá Boleslav, despite the fact that the prices of cars like the 110 R, 1000 MB or Felicia from the 1950s and 1960s are gradually rising. “I don’t think there is a more expensive Škoda from this model line or from this time period,” says Kočí.

What made this particular “hundred” so unique? Primarily its condition, which was completely original, including a slightly embossed paint and interior practically like a new car. After all, the car has only driven 1605 kilometers. “It turns out that the original state is in great demand today,” says the organizer.

But the history of this particular car also played a big role. This is an export specification intended for the Swedish market, in addition to specific equipment. The car has headlight wipers, a right rear-view mirror, self-retracting seat belts at the front, seat belts at the rear, a specific optional steering wheel or a rear axle stabilizer. If it was a classic hundred, no matter how much it goes up, it probably wouldn’t sell for that amount. It would be a maximum of hundreds of thousands of crowns.

However, the high amount was probably helped by a certain nostalgic factor, ie a deeper relationship between bidders and this particular model. “Originally, four bidders were registered for the auction,” describes Pavel Kočí. At the same time, however, he adds that one of them resigned before the auction itself. He bought a Fiat 850 Sport Coupé from 1965, which was also auctioned at the exhibition center in Lysá nad Labem. At the same time, it came to a much more modest 290 thousand crowns.

In the end, three applicants remained, two of them were present in person, one, from Slovakia, applied by phone. The Škoda 100 de Luxe was finally bought by a collector from Slovakia. “It is almost certain that the vehicle will not be driven at all, it is a museum exhibit,” predicts the organizer of the Retro Garage.

It should be noted that the Škoda 100 entered series production on August 25, 1969 as a modernization of the previous Škoda 1000 MB. It was offered in a standard or more luxurious version of de Luxe. Under the hood of the “hundreds” was a liter engine with an output of 30 kW, the more powerful Škoda 110 had an eleven-engine engine with an output of 35 kW. The engine was located at the rear and driven the rear axle. Production of the car ended in 1977, with over a million units of this model.

Of course, the green “hundred” was not the only item that was auctioned on Sunday afternoon. The Fiat 850 Sport Coupé has already been mentioned, and it is also worth mentioning the Škoda Forman from 1993 in the action version of the Silver Line, again in its completely original and mobile condition, only without the original radio. Although the action versions of the Favorites and Felicia have recently been among the most sought-after items, this particular Forman has not confirmed this. It was sold for 20 thousand crowns, while the auction reserve was 15 thousand crowns and the starting price was one crown.

“We were expecting a higher amount. I can’t explain why the amount was so low,” notes Pavel Kočí. According to him, the auction was attended by two bidders, at the same time it also had a charitable subtext. Half of the amount raised will go to help South Moravian cities hit by a tornado last week. Ten thousand crowns will go to a transparent account.

However, the organizer of the Retro Garage, in addition to four-wheeled vehicles, also sticks out some motorcycles, of which a total of six were auctioned. Above all, these are two Pioneers, specifically in both cases Jawa 50/21 from 1974. One was in its original condition with a period patina, the other after renovation. If you expected the renovated piece to sell for a higher amount, you would be wrong. The original Pionýr in mustard color was auctioned for 35 thousand, while renovated in a combination of gray and ivory for 30 thousand crowns.

“It can be seen that what is in its original condition is more desirable,” notes Pavel Kočí, adding that the owners of Pionýr with the original patina are still waiting for some further investments.

“I was definitely surprised by the Stadium S11, a moped from the 60’s. We sold one of the first types, which was in its original condition. It was auctioned for 57 thousand, while we expected a price of around 45 thousand,” Kočí adds another item that she surprised him at the auction.

A total of ten cars and motorcycles were auctioned, in addition to which the traditional veteran stock exchange and sales exhibition of classic cars took place at the exhibition center in Lysá nad Labem. If there is no global pandemic and associated restrictions, Retro Garage is held twice a year – in spring and autumn. About two thousand people visited the event last Sunday, with a number of around four to five thousand common. The organizers also explain this by the fact that it is summer and people go to the water or on a trip rather than to exhibitions.

Although one stock exchange and auction has just ended, the organizers are already planning another, specifically on 13 November. “Once again, we will have Jawa or ČZ motorcycles in the auction. At the same time, there are other interesting pieces in the pipeline, which I will keep for myself at the moment,” Pavel Kočí attracts those interested and visitors.

In the gallery, look at all ten machines that appeared in Sunday’s auction.