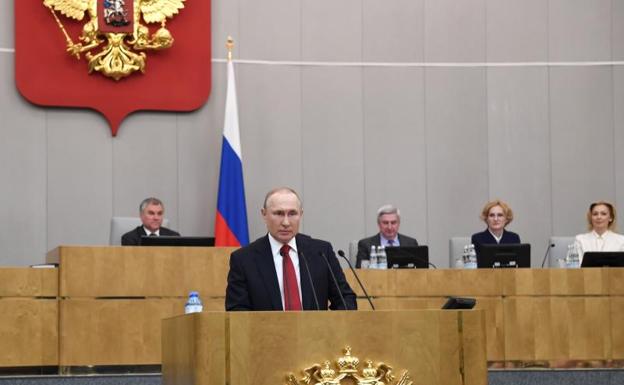 On the occasion of the debate and approval in the Duma (Lower House of the Russian Parliament) of the constitutional amendments proposed by the Kremlin, political parties and civil society, President Vladimir Putin has attended the debates this afternoon and intervened before the deputies to explain your point of view about it. Putin said he considers “Inappropriate” to eliminate from the Constitution the limitation of the number of presidential terms to two exclusively.

In spite of this, the legislators approved the amendment presented by the deputy Valentina Tereshkova, the first cosmonaut woman, in the sense that, once the country is endowed with a new Magna Carta, the current head of state should be put the accountant from zero terms, which could be presented to the presidential elections of 2024 for another six years and those of 2030.

This proposal obtained overwhelming support, but not from the Communist Party, so Putin said that, before the amendment is finally adopted, the best way to resolve the discrepancy is to take the matter to the Constitutional Court, where predictably there will not be a single judge who dares to rule that the current tenant of the Kremlin cannot continue to lead the country. In that case, Putin would say he has no choice but to accept.

Consequently, it has been an excellent staging with Tereshkova, a national icon, as a master of ceremonies and the communists as the supposedly bad ones. All so that Vladimir Vladimirirov Putin can stage that he does not cling to power but that others are what push him to continue beyond 2024.

Tereshkova, who belongs to the majority fraction in the Duma, that of the United Russia government party, said “we have to give Putin the possibility of taking part in the 2024 elections.” The opposition has already requested authorization to hold a demonstration on March 21 and thus protest against the annulment of the limitation of presidential mandates in the Basic Law.

All other amendments should be voted throughout the afternoon. In principle, the Federation Council (Upper House) will also do it tomorrow. The population will then be called for a vote on April 22, unnecessary, since the articles of the Constitution concerned do not require the holding of a referendum. Putin, however, pointed out that he wishes to give the consultation a “plebiscite” character with the obvious objective of legitimizing constitutional changes as much as possible.

The second HIV patient is cured – thanks to special therapy