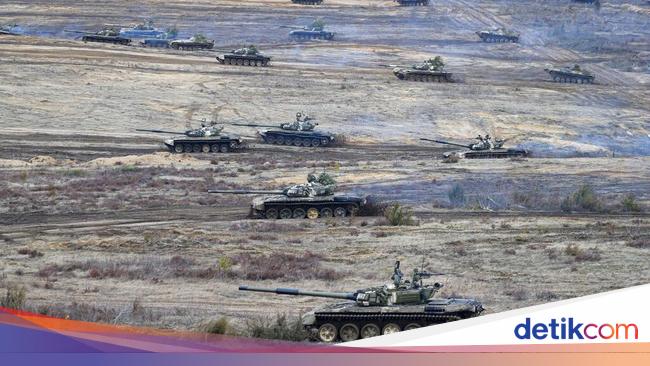 The United States government sent all of its diplomats in Ukraine to neighboring Poland because of security concerns. The move comes hours after Russian President Vladimir Putin ordered the deployment of Russian troops to two rebel-backed areas of the country.

Reported from the news agency AFP, Tuesday (22/2/2021), the deployment of Russian troops came after Putin recognized the independence of two regions of Ukraine controlled by pro-Russian rebels: Donetsk and Lugansk. He then instructed his Ministry of Defense to take on the role of “peacekeeper” in the separatist areas.

“Today the State Department is again taking action for the safety and security of U.S. citizens, including our personnel. For security reasons, State Department personnel currently in Lviv will spend the night in Poland,” United States Secretary of State Antony Blinken said in a statement. statement.

“We reiterate our recommendation to US citizens to leave Ukraine immediately. The security situation in Ukraine continues to be unpredictable throughout the country and may deteriorate greatly with little notice,” he added.

The move comes more than a week after the US moved its embassy in Kiev, the Ukrainian capital, to the city of Lviv, citing a “dramatic acceleration” in the deployment of Russian troops on the Ukrainian border. The city of Lviv is about 70 kilometers (45 miles) from the Polish border.

The number of staff at the US embassy in Kiev has been drastically reduced after the United States ordered the departure of most diplomats and suspended consular services.

Russia’s recognition of the breakaway republics, which formed the enclave held by Moscow-backed rebels since 2014, sparked immediate international condemnation, including from the United States.

Watch the video: The atmosphere heats up at the forefront of the Ukrainian military-separatist groups

Prima postponed the ban on rewinding the ads until June