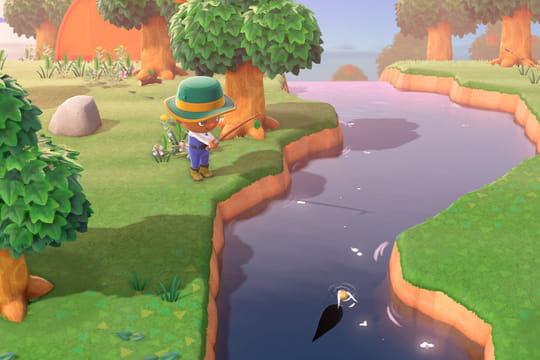 Animal Crossing: New Horizons was playable during PAX East 2020. This is an opportunity to learn more about the title. NPC, features, here is what we know.

[Mise à jour le 2 mars 2020 à 15h02] A multitude of new features will arrive with the Switch version of Animal Crossing. However, the developers have not failed to rely on the return of fans. The descending camera is making its return, a possibility that we have not seen since the Gamecube version (2001). To access it, just press the right joystick.

Weeds were a real scourge in previous episodes. They appeared when you didn’t take care of your city regularly enough. In order to give additional motivation to the players, you can now resell them to Tom Nook, for 60 bells each. A plus that will not be negligible to repay your various loans.

NPCs will be “smarter” than in previous versions. The developers wanted them to be more active in the event of inactivity. Thus, a battery of animations was planned, in particular concerning Tom Nook and Isabelle. For example, if you don’t ask them for a while, they will start dusting the room. Also, it seems that some are expanding their activities: Kicks, known for selling shoes, can now obtain accessories and bags.

New elements of personalization have been unveiled. From now on, the character created by the player will be able to be fully customizable. The developers want to offer a complete experience, with a choice without consequence. In a tweet written by the official account of Animal Crossing, we learn in particular that the player will be asked for his name and year of birth, at the start of the game. Thereafter, personalization will begin, and the choices will be almost endless.

The objective is not to be limited with limited choices, to offer new possibilities but also to include gamers who do not claim to be male or female. Shade, cut, hair color, nose shape, all the options available to you to allow you to create a character in your image. We also learn that if your character has a pale skin color and is regularly exposed to the sun, his complexion will tan. Finally, the choices will not be permanent. Once the creation stage has passed, you can change your look since each element can be modified thanks to a mirror. A small revolution compared to the previous opus.

It also seems that the choices are not all available from the start. It is likely that they can be unlocked later on as you progress, on your island. The developers have not given any information on the subject. In all cases, it will be possible to customize the complexion, color and style of the hair, the type of eye, the nose and the mouth. A passport will even resume the appearance of your character.

Now, I want everyone to know that you’ll be able to adjust the way you look while on your new island, so there’s no need to worry! Yes, yes, as long as you have a mirror or a vanity, you can change up your style at any time! pic.twitter.com/schX5mdZuj

On the occasion of the Nintendo Direct dedicated to Animal Crossing: New Horizons on February 20, 2020, a rain of information and visuals fell. The principle does not change, the player will land in an island city, and will have to shape it with his hands. However, we have just learned that it will be possible to choose from several types of islands: topography, location of rivers, Tom Nook’s shop, the player will have a greater choice. The question of positioning in relation to the hemisphere will be notably submitted to the player, and will have its importance on local resources.

A cooperation feature will be offered when the game is launched, allowing 4 players to meet locally. Each Nintendo Switch will be limited to a single island. However, up to 8 different profiles can be created on the same location.

Finally, your Nook phone (or NookPhone) can be physically personalized. Hulls are obtainable in game, in order to push personalization to its maximum.

Big news: the player will be able to terraform his territory. Unlike previous games which limited the experience with fixed natural borders, it will now be possible to break everything … or build. Cliff, river, nothing is immutable and each island will reflect the imagination of its creator (s). For the first time, it will be possible to build a bridge to connect two banks, or to formally draw your own roads.

In this regard, the founding principle of Animal Crossing remains the same. The island will evolve with the player, and the animal population – the neighbors – will gradually arrive. A wide range of buildings is planned, which can be made from harvested materials. On the other hand, it will no longer be a question here of a race for personal enrichment, but of a life-size experience of personalization. Beyond the buildings, it will be possible to manufacture and personalize clothes, tools and many other elements…

Like previous games, a multiplayer mode will be available for all players. It will obviously be possible to meet his friends registered on the Nintendo Switch, but also strangers. What to build relationships, or be the scene of fruit thefts to then establish them on your island.

A special edition for the Switch

Nintendo wants to mark the occasion, on the occasion of the March 20, 2020 release of Animal Crossing: New Horizons. The publisher has unveiled a special edition, in the colors of the license. The joy cons will be painted with pastel colors (green and turquoise). The console dock is also revisited with characters from the franchise. Nintendo has announced that stocks will be limited and will suffer from production problems related to the coronavirus. However, you can get it on the main merchant sites from € 359.99. This special edition will be delivered with a code allowing you to download the game.

There will be no direct connection to the mobile version of Animal Crossing: Pocket Camp. On the other hand, Nintendo announces that exclusive items will be given in the form of gifts (in both titles), without giving further details on the form of these.

During Nintendo Direct on September 5, 2019, we could see that Tom Nook will allow himself, with his formula “Escape from a desert island”, to send players to “take it easy” on a wild island. A slew of characters are waiting for you on the spot to live with you. They will offer several things to players, including help. Nook Inc. will also be present on the island, from a large tent in the center of the island.

Upon your arrival, you will be offered a NookPhone, a smartphone with several applications including photos, Nook Miles, and a list of crafts to make among others. The last feature will be crucial because a large part of the gameplay will be based on the harvesting and manufacturing of objects. It will be possible to sell some of these crops at the tent of Nook Inc. All this wildlife on the island will then make you want to install your little corner of paradise around your tent, and you will have the opportunity to decorate all as you wish. But it will only be one of the many activities with exploration, fishing, gathering, etc … And the end of the video reminds us that the game will be strongly influenced by the climate, evolving according to the seasons. The island will be colonized from March 20, 2020 on Nintendo Switch.

For the Moon and Mars, NASA still calls on young talents – Begeek.fr