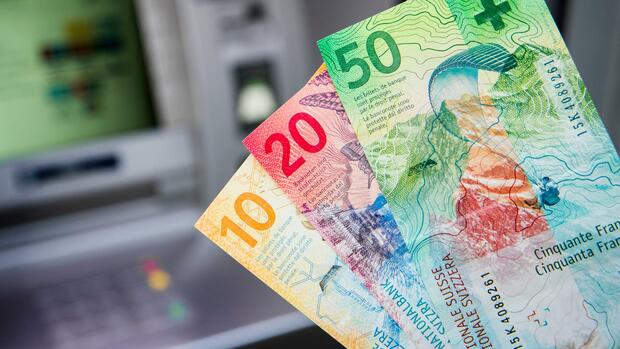 Zürich The soaring Swiss franc alarmed the domestic central bank. On Monday, the Swiss National Bank (SNB) emphasized its willingness to weaken the strengthened Swiss currency with foreign currency purchases. “The SNB is still ready to intervene in the foreign exchange market if necessary,” the SNB said.

Because of the war in Ukraine, investors are currently turning to the franc, which is considered a “safe haven” in times of crisis. At the beginning of the week, the exchange rate against the euro climbed to its highest level in more than seven years: for the first time since the SNB abandoned the euro peg, Switzerland’s main export currency cost less than one franc. In the afternoon, 1.0030 francs were paid for one euro.

“The Swiss franc is currently sought after as a safe haven currency, along with the US dollar and the yen,” stressed the SNB. She described the franc as highly valued and reserves the right to intervene in the foreign exchange market. A verbal intervention of this kind is unusual for the SNB.

“While the SNB has been rather relaxed about the appreciation of the Swiss franc in recent months, a fall below parity could change its stance,” said UBS economist Alessandro Bee. Parity with the euro is also a psychologically important threshold.

In recent months, the SNB has taken the view that the Swiss economy is well equipped to withstand a strong franc. In addition, a high valuation of the national currency helps to fight inflation, says David Kohl, chief economist at Julius Baer. The export economy is suffering from a strong Swiss franc. “But if everyone raises prices, Swiss exporters can also raise their prices.”

However, attitudes have changed with the outbreak of war in Ukraine and growing concerns about the global economy: a soaring Swiss franc and a simultaneous downturn in Swiss exports is seen as a crisis scenario that increases the likelihood of an intervention. DZ Bank analyst Dorothea Huttanus says: “One should continue to be skeptical about an unchecked appreciation of the franc due to the stability risks.”

Since January 2015, the Swiss monetary watchdogs have been fighting against an appreciation of the national currency with negative interest rates and foreign exchange market interventions. At that time, the SNB overturned the exchange rate floor of CHF 1.20 per euro, which it had previously defended for more than three years with interventions worth hundreds of billions of francs in order to support the export-dependent Swiss economy.

In 2021 alone, the SNB made a profit on its foreign exchange reserves of 26.5 billion Swiss francs, as the central bank announced on Monday. Six billion of this goes to the Swiss state and the cantons.

The investment strategy of the SNB

However, it is highly uncertain whether the billions in profits will continue this year. Above all, the sell-off on the stock markets, especially in technology stocks, is having an impact on the value of the dollar portfolio. At the end of 2021, the value of US stocks held by the SNB, which the Federal Reserve reported to the US Securities and Exchange Commission, was still $166 billion – a record.

But the value of the almost 63 million Apple shares held has fallen by around ten percent since the beginning of the year. The losses in the holdings in Tesla (minus 30 percent) and Facebook parent Meta (minus 40 percent) were even greater. In the meantime, the total value of the portfolio is likely to have fallen to around $144 billion – which corresponds to a book loss of more than $20 billion in just three months.

The SNB cannot do anything about this, says Julius Baer economist Kohl: “The SNB does not actively select individual stocks. It buys the market based on market capitalization.” The individual positions in stocks such as Apple, Amazon and Tesla in the SNB’s portfolio essentially correspond to the weighting of the stocks in the common US stock indices, S&P 500 and Nasdaq Composite.

Stock selection is not one of the SNB’s core competencies, said Kohl. “It’s basically like a private investor investing in ETFs.” As a result, the portfolio is just as vulnerable to fluctuations in a few major stocks as US stock indices are.

There have long been voices calling for the SNB to manage its equity investments like a sovereign wealth fund. The Norwegian sovereign wealth fund serves as a model. Kohl believes that this discussion could now gain further momentum: “If the fluctuations on the markets become more intense, it will fuel the debate that the SNB must manage its portfolio more actively.”

So far, the SNB has always rejected such demands. The central bank does not want to be deprived of the flexibility to be able to liquidate the equity portfolio if it ever has to support the franc. At the moment, however, it looks as if the SNB will have to continue printing francs and swapping them for euros and dollars in order to cope with the appreciation.

With material from Reuters.

Cheap Samsung cellphones will be sold without a charger? page all

Economic consequences of the war – NOS