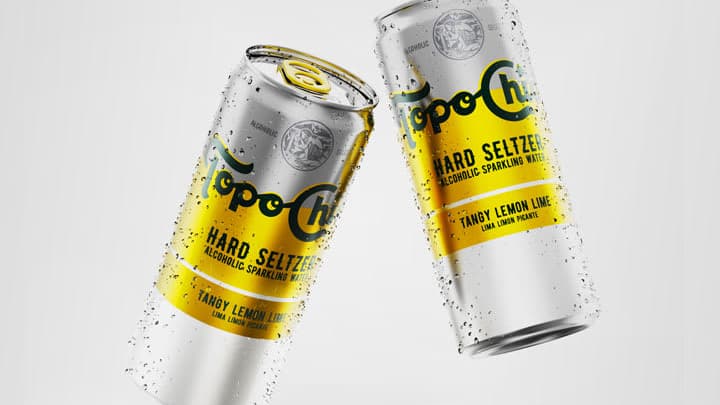 Still unknown a year ago, these drinks are more and more present on the shelves of supermarkets.

A real hit in the United States, the hard seltzers landed in France last November.

Behind this denomination (seltzer comes from the village Selters, located in Hesse and refers to sparkling water or seltzer water) hides a drink that combines flavored sparkling water (but not very sweet) with a dose of alcohol (usually made from cane sugar fermented) between 4 and 6%, the equivalent of a standard beer.

How have French consumers received this new type of beverage? According to a Nielsen study, this product, now present in every two supermarkets, has generated 246,000 euros in turnover since its launch.

It must be said that the shelves are growing: initially only one brand was present (Snowmelt) now joined by several competitors. There is now an average of 2.9 references per store.

And the arrival of summer could give wings to this “neo-segment” as explained by Nicolas Léger, analytical director at NielsenIQ:

“Hard seltzers are particularly refreshing drinks and are destined to conquer consumers during the summer season. The coming months will therefore serve as a revealer as to the potential of the category, especially with the arrival of many players in this new market announced. in France.”

Coca Cola launched its alcoholic waters in France in April under the “Topo Chico” brand. The product was already launched in Mexico in September, and in November in several European countries, including the United Kingdom, Ireland, Austria and Greece.

“The challenge will be to broaden the target and also to settle beyond the big cities, in particular to recruit consumers who are fond of festive spirits and beers,” he continues.

Indeed, the study underlines that sales are made primarily in local shops in town (30% of sales), especially in Ile-de-France (22%).

Its price could nevertheless slow down this growth: sold on average 5.70 euros per liter in hypermarkets, hard seltzers are, for example, much more expensive than beer, the average price of which is around 2.70 euros per liter.

However, this drink does not seem to target the youngest as explained to BFM Business, Yann Casen who imports Snowmelt in France. “We are quite the opposite!” The price, worthy of an IPA beer, and the results of customer surveys in the United States, target the hard seltzer more for millennials aged 25 to 45. Clearly, it may replace the “rosé full of ice cubes”, he thinks he knows.