Dusseldorf Germany’s companies wanted to transfer a dividend of over 45 billion euros to their shareholders after this year’s Annual General Meetings. Actually. The total is calculated from the corresponding proposals of the groups in their business deals for the past year and the annual press conferences.

But after Dax– Newbie MTU has announced that, given the corona pandemic, it is unlikely that a dividend will be distributed, “the ice has broken”, fears Commerzbank-Expert Andreas Hürkamp. The engine manufacturer originally wanted to distribute 3.40 euros per share, 55 cents more than in the previous year.

According to MTU, many companies are now rethinking their previously announced dividends. Covestro for example, plans to continue paying a dividend of EUR 2.40 per share, but a spokesman for the group restricts the Handelsblatt: “We will continue to monitor economic developments closely and, if necessary, take them into account in our dividend proposal.”

Express themselves similarly BASF and Volkswagen. With 3.3 billion euros, the car maker would be the largest payer after the alliance. On the other hand, the pharmaceutical giant Bayer announced on Friday that it would transfer EUR 2.80 per share at its purely digital general meeting on April 28, as planned.

For shareholders and the Dax prospects, dividend cuts and, above all, the uncertainty about it are bad news. Companies have never canceled the dividends proposed by the Board of Management and the Supervisory Board, not even during the financial crisis in 2009, the largest recession in German post-war history. Many stocks are held primarily because of high and reliable dividends. With the annual distributions, more could be earned in the long run than with price increases. 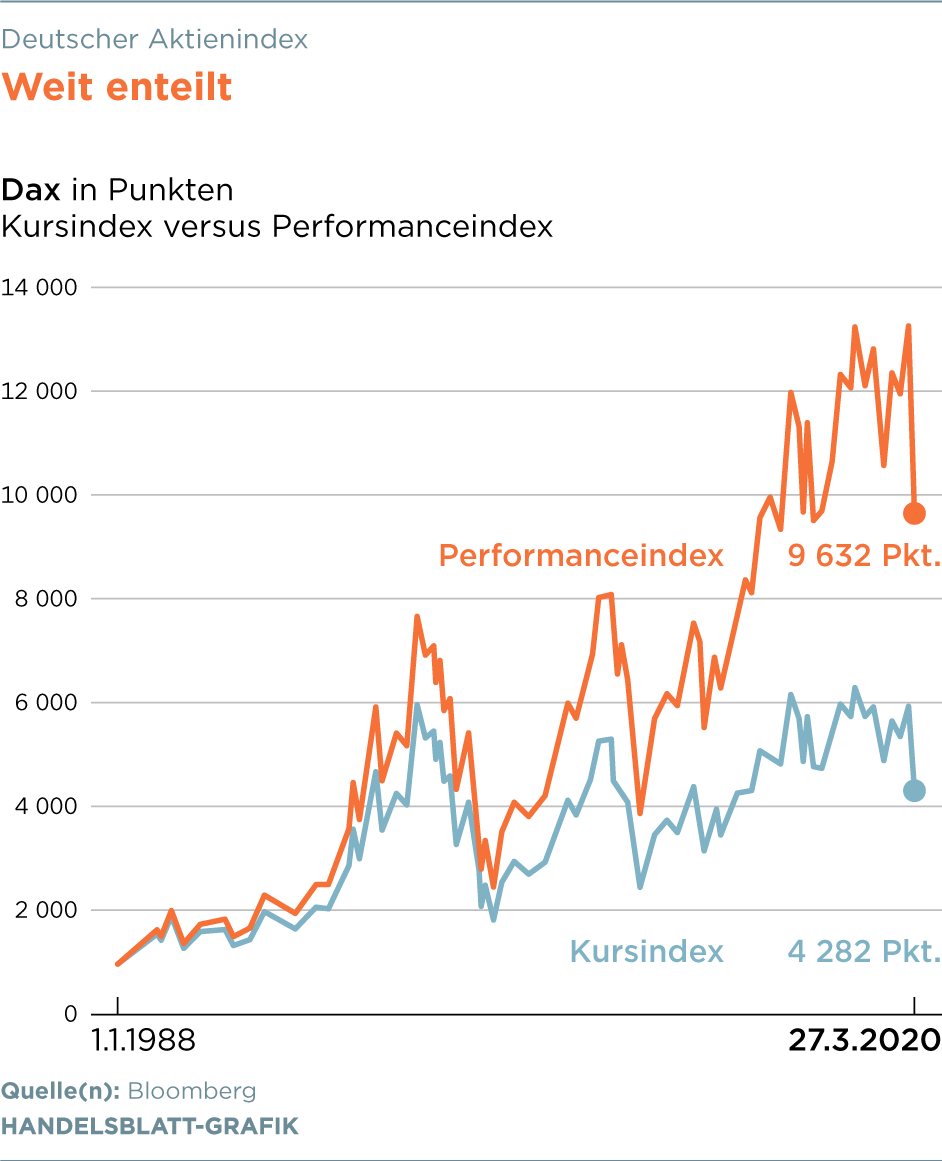 So it remains to be seen how companies will deal with the issue of dividends at the annual general meetings, which will probably be made up for in the second half of the year after the cancellations. With the announced 45 billion euros, for example, the crisis-shaken one Lufthansa buy almost ten times.

Twelve German companies have promised their shareholders more than one billion euros in dividends, most of all Allianz with four billion euros, Volkswagen with 3.3 and Siemens with 3.1 million. But in the face of the global crisis, are the promises actually kept?

“MTU is the icebreaker with a view to further deletions,” assumes Andreas Hürkamp from Commerzbank. The strategist has been pursuing corporate dividend policies for decades. There has never been a comparable situation in which companies have canceled dividends that have already been announced – not even in shock after the bankruptcy of the major American bank Lehman in 2008. With the cancellation, MTU would keep 177 million euros.

See also  The Story of the Beginning of Falling into the World of Stocks, Kaesang Pangarep: 2 Months of Loss Continues

The approach of the Dax newcomer seems understandable given the massive loss of revenue this year, but is controversial. After all, the dividend is about the success or failure of the past financial year. There was no corona crisis yet.

Jürgen Kurz from the German Association for the Protection of Securities (DSW) describes such a procedure as “legally difficult”. “After the approval of the consolidated financial statements by the Supervisory Board, the dividend proposal is also approved, and companies can no longer go back from such a decision,” Kurz argues, but adds: “The question is not legally clear.” He refers to legal opinions that are different the investor protection have previously caught up with.

In contrast, the lawyer Marc Löbbe from the renowned Frankfurt business law firm Schilling, Zutt & Anschütz grants the companies the right to make provisions with the dividend retained: “It is even permissible at the Annual General Meeting to propose a change to the original proposal for the appropriation of profits and thus the Bring in dividends, ”argues Löbbe. It is controversial among lawyers under what conditions this is possible.

The question is controversial, because nine out of ten German listed companies currently want to distribute dividends for the past financial year. You are now faced with the decision to stick to this in view of the good results in the past year or to cut the dividend due to collapsing earnings due to the corona crisis. “In the current environment, I expect the corporations to cut their dividends significantly,” predicts the chief investment strategist at German bank, Ulrich Stephan.

The focus is not on companies like Beiersdorf, handle, Deutsche Telekom and SAP. Your dividend seems certain because the business models are little to no crisis prone. Siemens and Infineon have been among the few companies that have already paid dividends because their fiscal year ended in late September. It’s about the many cyclical companies.

For days, analysts have been speculating on a dividend cut at the chemical companies BASF and Covestro as well as at the automaker Volkswagen. The general meetings, which have been postponed for almost all companies for an indefinite period – but still this year – fuel corresponding speculation. “The later the annual meetings take place, the more shareholders and management will focus on the current financial year,” says Commerzbank analyst Hürkamp.

“Covestro plans to continue paying a dividend of EUR 2.40 per share,” a group spokesman told the Handelsblatt, but at the same time restricts: “However, we will continue to monitor economic developments closely and, if necessary, take them into account in our dividend proposal.” There will only be a dividend proposal at the – postponed – general meeting.

BASF also keeps all options open. “Not so far,” answers a corporate spokesman when asked whether there are any plans to change the announced dividend of EUR 3.30 per share – and he adds: “In principle, such a proposal can also be changed at the Annual General Meeting. ”

At BASF, that would be like breaking a taboo. Shortly after taking office, CEO Martin Brudermüller put himself under pressure and announced that he would like to increase the payout every year in the future. The maxim among his predecessors was: pay more in good times and keep the dividend in bad years if possible. A cut of just ten cents would mean a dividend at BASF “only” at the previous year’s level – which would have broken the new boss’s first promise to shareholders.

Volkswagen is in a tricky situation. In view of the high after-tax profit of 14 billion euros, the world’s largest car maker has increased its dividend significantly from 4.86 to 6.56 euros per preferred share. Even so, the payout ratio calculated from the net profit is only 24.5 percent. 40 to 50 percent are common internationally.
Even more: “We are still below our strategic target for a payout ratio of more than 30 percent,” says a VW Group spokesman.

So there is a lot of buffer. Nevertheless, Volkswagen is also considering reflecting on the decision again: “The decision on the dividend will be made at the 2020 Annual General Meeting. Until then, we will closely monitor the further development of the corona crisis. ”The competitor BMW intends to distribute 2.50 euros per share as planned, one euro less than in the previous year. “There is currently no intention to change anything in these plans,” it says on request. However, the Munich-based company also leaves the decision open.

Is only a little more solid Daimler to his promise. “Our proposal for a dividend has been made and there is no reason to change anything at this point,” said Daimler CEO Ola Källenius. Which means something like: Tomorrow everything can look different. There would not be much to cut at Daimler anyway, after the Stuttgart company had announced in Europe before the corona crisis that it would cut its payout from 3.25 euros to 90 cents.

In particular, companies that are considering taking government aid during the crisis are likely to be forced to cut their dividends. This applies, for example, to the automotive supplier Leoni. Lufthansa also talks to the state development bank KfW about possible aid, which has not yet been necessary. Both Lufthansa and Leoni canceled their dividends.

The banks have been in the focus of dividends since the end of last week. So far, the crisis has hardly spread to the financial industry. But the public sector does not want to have to step in again after the banks have distributed billions of dollars. It was like that a decade ago. “We advise financial institutions to handle existing capital resources very carefully,” said Felix Hufeld, president of Bafin financial supervision. He advises banks to carefully consider dividends, profits and bonuses.

Deutsche Bank need not think about this. She has no intention of spilling anything anyway. So far, Commerzbank intends to pay a dividend of 15 cents per share. Given the state share of just over 15 percent that resulted from the financial crisis a good decade ago, anything but a deletion would be surprising. 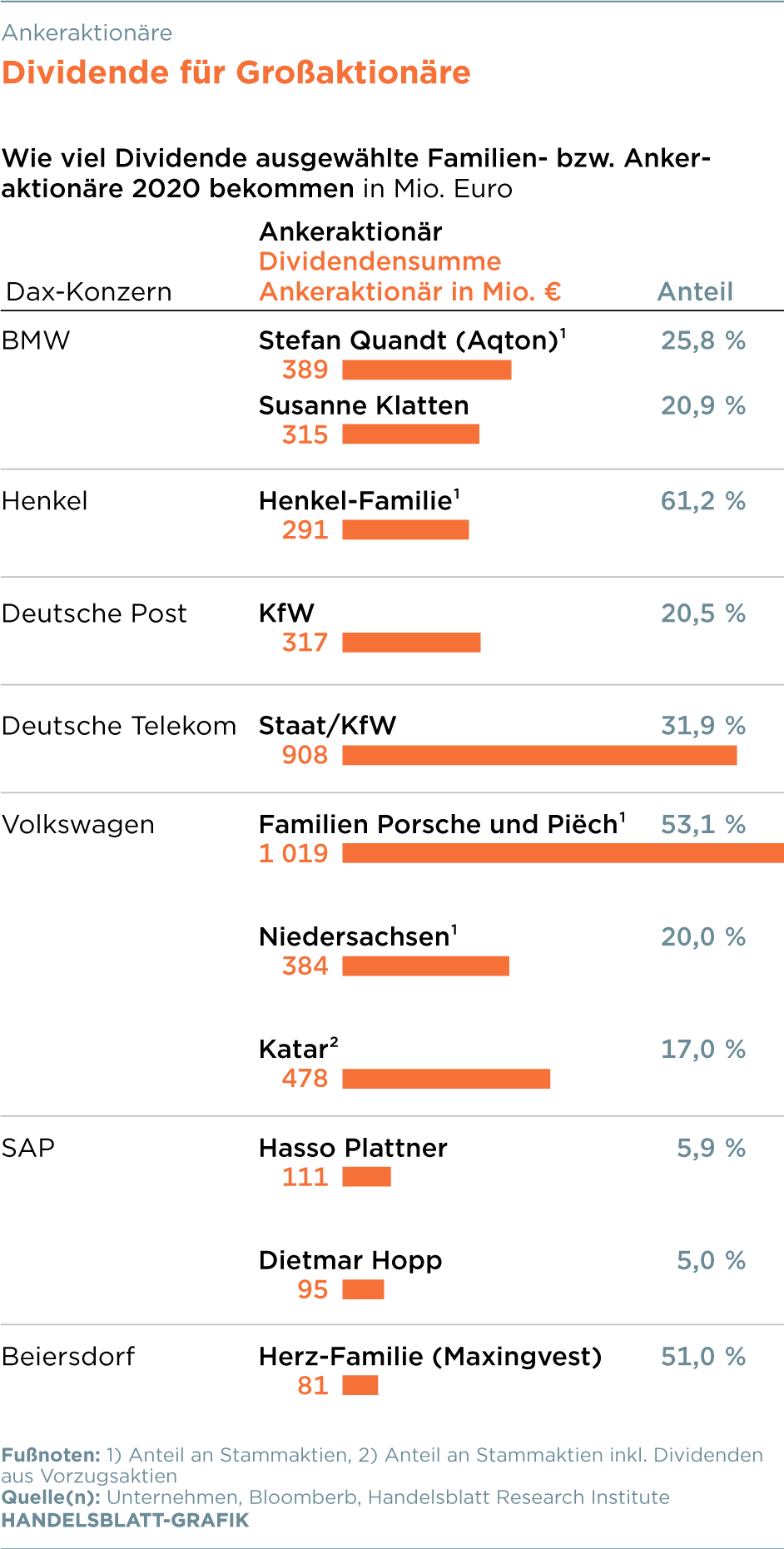 From a business point of view, a dividend waiver makes sense given the large drop in earnings, even though the companies have financial cushion. The equity capital of the Dax groups rose by almost four percent to 656 billion euros in the course of the past financial year. This corresponds to a solid average equity ratio of 34.5 percent. With the exception of the provider Eonwho, however, does not have to fear any losses in view of the corona crisis, all other groups have a quota above the critical mark of 20 percent.

Operating cash flow, i.e. the cash generated from its business activities, also grew by a good 11 percent to EUR 142.8 billion within one year. Volkswagen amassed the most cash flow with 30.7 billion euros, followed by Deutsche Telekom with 23 and Daimler with 13 billion euros.

However, liquidity is quickly lost if, during the crisis, income suddenly runs dry and costs remain the same. The companies experienced this at the turn of 2008/09. This time, the standstill in the economy is much bigger. “Many companies are likely to increase their debt in the form of new loans in the coming months. In the medium term, we also expect capital increases to strengthen equity, ”predicts DZ Bank expert Christian Kahler. This certainly includes withholding dividends to limit cash outflows.