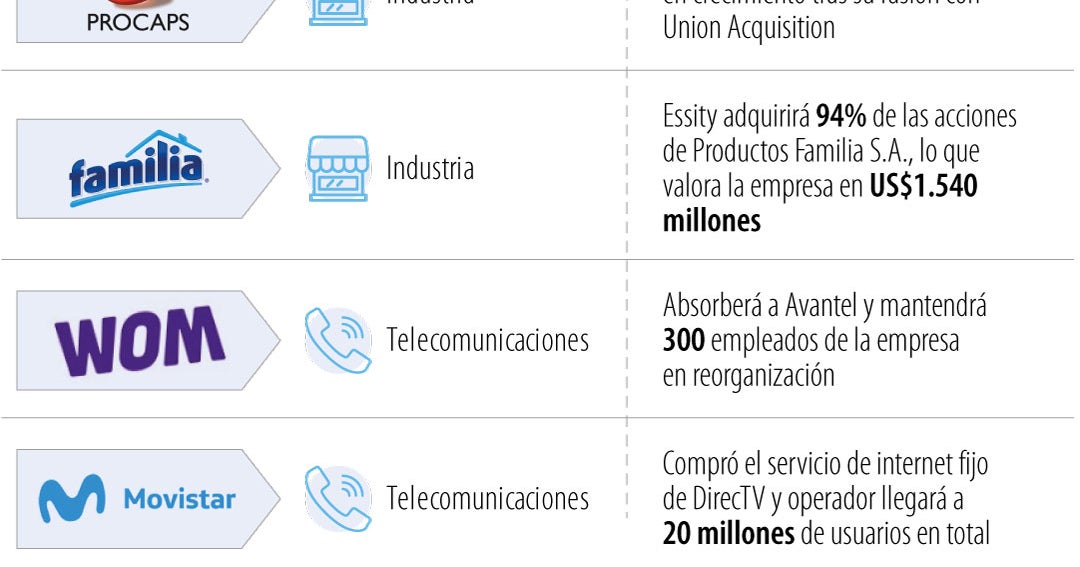 Although 2020 was a year of many challenges for the business sector with the arrival of the pandemic, it was also considered the year of resilience.

Despite the fact that many people expected that in 2021 the economic reactivation would take a big leap, this was marked by new restrictions and blockades in the national strike; However, in just six months, seven important moves have been made with leading companies such as Procaps, Familia, WOM, Movistar, GEB, among others.

In March of this year, the Barranquillera Procaps announced the signing of two agreements with Union Acquisition Corp II (UAC II); one for financing and the other for a definitive business combination, which will allow the Colombian company to be listed on the Nasdaq index and boost its growth in the international market, for which it will have capital of US $ 215 million.

Similarly, the Swedish company Essity acquired 94% of the shares of Grupo Familia, which valued the company at US $ 1.54 billion.

“We know that by working more closely with Essity we can leverage innovation, build stronger and more sustainable brands,” said Andrés Felipe Gómez, president of Grupo Familia at the time.

The telecommunications sector also presented some important business in May, as WOM, a company led by Chris Bannister, announced that it would absorb Avantel’s responsibilities, in addition to keeping the company’s 300 employees.

During the same month, Movistar assured that it reached an agreement with DirecTV to acquire and assume the operation of its internet services in the country; with this, the operator would exceed 20 million users in total.

See also  Cash Converters lands in the middle of the supermarket: Cora launches into the second hand

“We will strengthen our operation by having additional spectrum to support the growth of mobile data traffic that we have been observing in recent months, especially after the start of the pandemic,” said Fabián Hernández, CEO of Telefónica Movistar Colombia.

Likewise, June has brought news, after the shareholders of Grupo Energía Bogotá unanimously approved the agreement with Enel for the creation of Enel Bogotá, which would generate 25.1% higher profits by 2025, and will allow the merger of Emgesa, Codensa and Enel Green Power.

This week it was also known that Glencore acquired the participation of BHP and Anglo American in Cerrejón. This is 33.3% of the shares that each company had in the La Guajira thermal coal mine, and approvals are now awaited.

In this way, the Swiss multinational becomes the sole owner of the mine, in a transaction for US $ 588 million in total, that is, US $ 294 million to each company.

In the most recent case, the multinational AkzoNobel will buy Grupo Orbis as part of its expansion strategy to South America and Central America.

This move includes the paints and coatings business Pintuco, Andercol and Poliquim.

“This is an excellent planned acquisition that aligns perfectly with our strategy of creating world-leading positions and driving growth,” said AkzoNobel CEO Thierry Vanlancker.