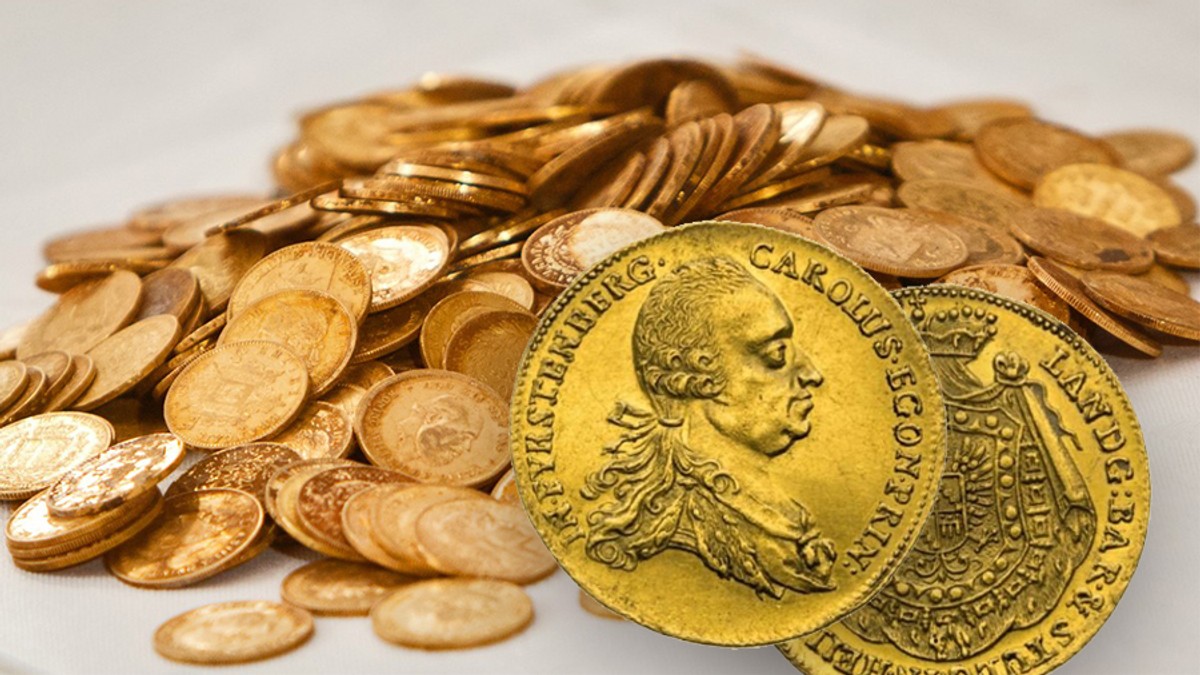 Coins from the largest gold treasure ever found in Europe are heading to the auction. It weighed 50 kilos and contained thousands of Celtic coins, it was found in the Rokycany region.

The big attraction of the upcoming auction of the Macho & Chlapovič auction house is a coin created from the largest European gold treasure, called the Podmokel treasure. It was used to create a ducat, a gold coin, by Charles Egon I of Fürstenberg with a starting price of about 250,000 crowns. This is the year 1772, it was minted in Prague and weighs 3.47 grams.

The first coins from a treasure found near Podmokel in the Rokycany region appeared in 1771. “The finder was supposed to be Janota the day laborer, who found golden shiny wheels in the valley and took them home to the children, thinking they were brass buttons. he found out that it was gold, the news spread, and the villagers began a search of the site, but they learned of the find from the manor, and owner Karel Egon of Fürstenberg wanted a gold treasure for himself. , “Jiří Militký from the numismatic department of the National Museum in Prague reminded of the history of gold coins.

The discovery of the then aristocratic circles perceived as a good sign. Fürstenberg had the coins stored, sorted and counted on Křivoklád. At the time, however, coins were seen more as gold without historical value. Therefore, they were sold to the Prague Mint and ducats of Maria Theresa with the year 1771 were minted from them. Since gold was used for these ducats from elsewhere, it is not clear which of these gold coins comes from the Podmokel treasure. The only coins that are 100% clear that they come from the treasure are Fürstenberg’s ducats.

See also  GISMETEO.RU One of the most popular brands in Russia for the second time this month raises car prices - Car

The collection of coins found in a suitcase in Prague eventually earned 58 million!

Another rare coin in the auction is the ducat of Albrecht of Wallenstein, vintage 1631. It was minted in Jičín, weighs 3.45 grams and the starting price is 20,000 euros, in terms of about half a million crowns. One of the reasons why Wallenstein’s coins are rare is that after his death the emperor had these coins melted down and the metal was used to mint imperial coins.

The auction starts on Friday at 1 pm, it is possible to auction in person in the hall and online. It is necessary to count on an auction surcharge of 20 percent of the final price for each coin.

You can see the most interesting items from the auction, including a rare ducat embossed in the gold of the Podmokel treasure, in the gallery: