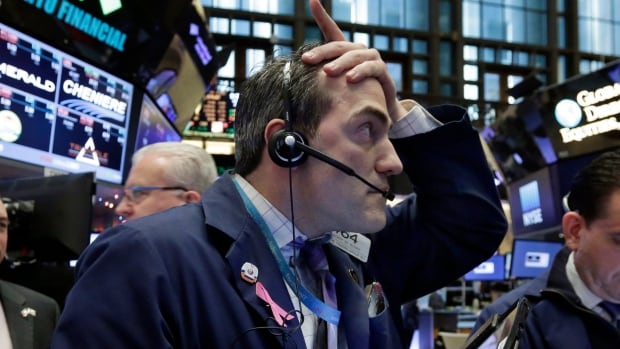 North American stock markets were halted shortly after the opening Monday morning when the switches designed to slow panic selling went into action within minutes of opening.

The NYSE, Nasdaq and TSX all strike what is known as a level 1 trading stop just minutes after Monday morning’s opening. This interruption automatically suspends all trading on the market for 15 minutes after a drop of more than seven percent.

A level 2 shutdown is automatically imposed after a 13% drop for another 15 minutes. If the decline reaches 20%, a level 3 stop comes to close the negotiations for the rest of the day.

The TSX has lost more than 1,400 points, or 8%, within minutes of opening, so the Canadian index switch has been activated. When it was reopened, it dropped by 1,600 points at some point, or more than 10%. It has been the worst day for TSX since 1987.

Trade interruptions were lifted 15 minutes after implementation and sales continued in both the United States and Canada, although not enough to implement a level 2 shutdown.

“This is basically panic selling,” said Peter Cardillo, chief market economist at Spartan Capital in New York. “There is a lot of fear in the market and … it is an indication that a global recession is not far away.”

The so-called “fear index” of Wall Street, known as VIX, which increases during periods of volatility, jumped by 14 points to 56.61. This is the highest level since 2009, during the financial crisis.

The panic began on Sunday evening after Saudi Arabia kicked off a total price war in the oil market, announcing that it would remove any production limits. That move pushed the price of crude oil to crumble over 25% and overcame the fears that existed about the coronavirus that is spreading all over the world.

Canadian energy companies have sold hard. Suncor has lost over 25% of its value. At some point Cenovus was almost half.

Bond yields in the United States and Canada fell to their lowest levels as investors fled for security reasons. Investors flock to things like bonds because they are perceived as safer than other assets, as governments are unlikely to default on their loans.

All bond purchases increase their price, which countercurrently reduces their returns, because governments don’t have to offer a great interest rate to find a buyer available for their debt.

At some point on Monday morning, the Canadian government’s 10-year yield fell below 0.3 percent, the lowest level ever recorded. This means that a buyer of that bond is actually willing to lend $ 1,000 to the government for an entire decade and will only get $ 3 a year for their problems. With inflation taken into consideration, they are actually losing money. But they are willing to accept that meager return because it is preferable to other options where they think they will do even worse.

The U.S. decade tells a similar story, dropping to an all-time low of 0.3228 percent at some point on Monday morning

“The lower it gets, the more likely people are to become even more panic,” said Rick Meckler, a partner at Cherry Lane Investments in New Jersey. “The more it goes down, the more nervous people will be about it.”