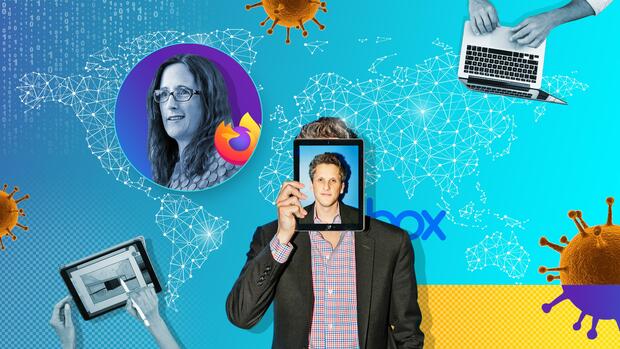 San Francisco, Dusseldorf Katharina Borchert is sitting in a conference room in Mozilla’s headquarters in Mountain View. On the back wall is a large video conferencing screen. It is the end of February, one of the last days before the fear of the corona virus finally reaches Silicon Valley. A day before Facebook Thousands of employees on his campus in nearby Menlo Park “strongly recommended” to only work in their home office.

For Mozilla, which offers Firefox, the third most widely used Internet browser in the world, this is hardly anything new. Founded in 1998 as a foundation company on the ruins of the browser pioneer Netscape, it has its origins in the voluntary open source movement, whose headquarters have always been the Internet. Many employees started from anywhere in the world as programmers on individual projects and did not move to California when they got a permanent job at Mozilla.

The 50-person team that heads innovation chief Borchert writes codes for Firefox and has developed “Common Voice”, the second largest open source database for voice recordings, which can be used, for example, to train smart assistants.

The 47-year-old is the only one who comes to the Mountain View office. She likes to do that. She holds video conferences with the others, sometimes due to the time difference from walking in the morning until late at night. “The phone is extremely unsuitable,” she says. A video conference helps to avoid misunderstandings and confusion – if it works properly.

The employees work in nine time zones, in offices, coworking spaces or at home. Her former “Chief of Staff” called his office a forest hut in northern Sweden, others are based in Mumbai or Munich. Even her personal assistant works in nearby San Francisco, but saves the commute down to Silicon Valley.

A few weeks later, many companies around the world are Mozilla – forcibly. Because of the corona pandemic, companies in which stamping has just taken place must make friends with conference calls and trust-based working hours.

Bosses, who otherwise measure productivity by the office chair occupancy rate in their aisle, are now sitting in the home office themselves. Work routines, working hours, informal hierarchies, coffee gossip – everything has to be rearranged.

Home work par ordre du virus – it is a gigantic social experiment that could change the work culture far beyond the corona crisis. If companies succeed in integrating telework productively into their processes, employees who want it could stay at home most days. Workers with children could save themselves the triangulation of the house – daycare center – office in the morning. And city centers could be cleared of gray office complexes and commuter traffic in the long term.

If it fails, the looming economic crisis also creates a productivity crisis for millions of companies and employees who lose their minds between Slack news, zoom conference and changing diapers.

Many bosses distrust the employees in the home office

Borchert knows German offices – the ex-journalist was editor-in-chief of the news portal “Der Westen” in the Funke media group and managing director of Spiegel Online. In Germany there is a mistrust of whether employees in the home office really work. Even in the companies that Borchert was running at the time, she was never able to establish another culture. “I got my team to teach me what good remote leadership is,” she says.

And what makes it special? “You have to document a lot more – team norms, processes and conferences,” notes Borchert. If she writes an email at the weekend, she points out that she doesn’t have to answer until Monday. Borchert is only allowed to hold conferences with Europe until 10 a.m. – if the employees do not allow an exception. If someone sends a message in the Office Messenger Slack to all members of a channel, a bot will automatically inform them of the different time zones in which the members are and who may therefore no longer read them.

In general, Slack-Bots do a lot at Mozilla: Every Monday morning, one of the employees asks what important projects they did last week, what they want to do this week and whether there is anything personal that they want to share – the latter to get the gossip out of the Transfer coffee break to the virtual office.

When many new members joined Borchert’s team, the “donut bot” chose a different colleague every two weeks, with whom they could go for a coffee via video conference.

These are not just emergency nails, Borchert insists. Nor are they ideas that only work in the software industry or in a non-profit company. On the contrary, this culture brings advantages that have nothing to do with homework. For example, new employees could be integrated more easily because they know where to find important information or who is responsible for what – because the otherwise unspoken laws of a team are pronounced.

“In the office, the team norms wobble implicitly through the room,” says Borchert. “If you can no longer just go down the aisle, you have to make it much more explicit.” And honestly, how many companies organize coffee dates between old and new employees – whether by bot or on the bulletin board?

Mozilla is known worldwide, but a fairly small fish in Silicon Valley. A much larger campus also has its Mountain View campus and is courting employees similar to Mozilla. “I don’t have to go with Google compete to find the best machine learning talent from Stanford, ”says Borchert. “There are equally good people in Bulgaria or India.”

In the valley of inventors and developers, all factors for a strong homework culture seem to come together: a young, digitally educated workforce. Jobs where output counts instead of hours spent. And the tough talent competition, the gigantic property prices and salaries reward a globally distributed colleague.

But a strong homework culture is not a question of geography: Google, Apple or Facebook are digital companies, but they are by no means purely digital companies. With its gigantic headquarters such as the Googleplex, the U-shaped Apple Park or the Salesforce Towers have just built the Silicon Valley giants of the culture of the Cathedrals bulk office.

Before Corona, even Facebook employees with children who often wanted to work from home could often only stay in the home office for one day. In a telephone press conference, Facebook boss Mark Zuckerberg recently announced that working at home with his wife and two children was also a major change for him.

This applies to his company, which even offers a platform for distributed teams with Facebook Workplace, all the more: After the home office order, Facebook employees got into a dispute as to whether discussions about which weekly market sells the best seeds belong in the internal work forums or Not. A kind of discussion that not only Facebook is currently experiencing.

“The big corporations here are just that: big corporations,” says Aaron Levie. The 34-year-old founded the cloud service provider Box in 2005 as a student, he knows Silicon Valley and its culture very well. “The companies here have all digital tools, but they face many questions of the same kind: How do we guarantee IT security if thousands of employees suddenly access our network from outside?” He says. Many people in the area around San Francisco have emergency plans for earthquakes, but not for a pandemic.

For the video call, the founder sits in his living room under an abstract drawing. It is the end of March, in the boxing center in Redwood City, right next to the railway line between San Francisco and Palo Alto, has only been an emergency occupation for fourteen working days.

Why does a company like Box need a head office? Levie speaks of spontaneous collaboration, of flipcharts that you can quickly stand up to. But he also says, “We’ll think about it very differently after Corona.”

He is currently learning in real time how telework is changing culture for the better. The weekly general meetings, in which most employees took part personally, now take place virtually. “More questions come from more different people. It’s more collaborative than it used to be, ”says Levie.

Perhaps it is Californian optimism to want to wrest positive things out of the crisis. Perhaps it is the business opportunities that a cloud entrepreneur like Levie sees through a trend towards remote work. But even if it is primarily software companies that promote a stronger remote culture, few of the reasons are limited to their industry. It is not only developers who prefer to put their children to bed than to be stuck in the commuter train at this time.

The result is more important than the hours worked

Of course, like many things, Silicon Valley companies are more keen to experiment. There are companies, like the developer network Gitlab, of three Ukrainian entrepreneurs who ended up in San Francisco through the start-up academy “Y Combinator”, but still call themselves “Remote Company” as companies without headquarters.

At the same time, there are companies with a strong culture of remote working not only in the Laissez-faire state of California, but also in Germany. This includes, for example, the cloud provider Nextcloud. The company’s open source software is used, among other things, by the federal government for data exchange between authorities.

“We have an office in Stuttgart and one in Berlin, but our employees mainly work from home – sometimes across several time zones,” says Nextcloud founder Frank Karlitschek. For example, a colleague lives in Hawaii.

The 55 employees are used to agreeing on digital channels. “Home office requires that a company think results-oriented. I cannot check how long an employee works or how long breaks they take, ”says Karlitschek. In the end, the results counted and not the hours worked. “We don’t care who works where, when and for how long.”

In addition, the company relies on a way of working that can also be delayed. “Our processes also run asynchronously. We have few classic meetings. That’s why we work with chats. ”Agreements or tasks could be shared there, which an employee then takes up as soon as he has time – for example because he lives in a different time zone and is therefore awake at different times.

However, the Nextcloud team cannot do without personal contact either, emphasizes Karlitschek. “We meet several times a year for a week.” This would allow personal contacts to be established and deepened, which would later facilitate agreements. Actually, all employees should come together in Berlin soon, but that won’t work because of the corona pandemic. The meeting is now taking place as a video conference.

More: Despite home office and contactless payment, the pandemic is only pseudo-digitizing. But it also offers the chance to change course.