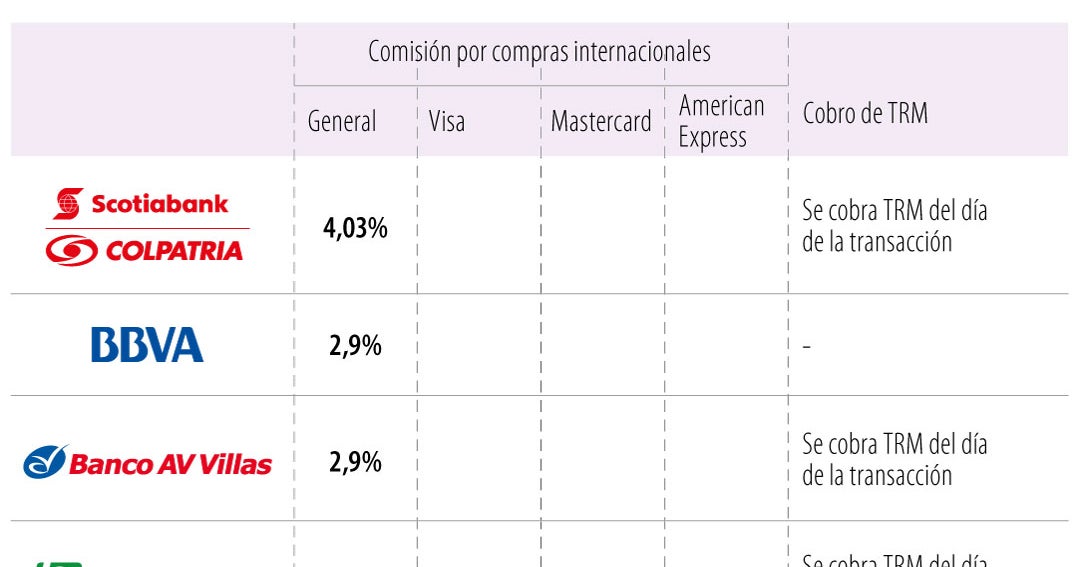 The use of Credit cards and debit is one in Colombia and the other abroad. For this reason, if you are going to make purchases outside the country with national financial products, you must take into account the “fine print” of your bank, so as not to be surprised.

The card franchises, according to the negotiation with each bank, charge a commission on the value of the purchase. Banco de Occidente, Bancolombia and Banco Falabella comply with these rates. However, other financial entities charge an additional percentage to cover the expenses demanded by Visa, Mastercard and American Express and have their own commission.

The Republic inquired among the different financial entities and visited the web portals of each one, and found that the highest commissions are charged by Scotiabank Colpatria (4.03%); Bbva and AV Villas (2.90%), Banco Popular (2.50%) and Banco de Bogotá (2.40%).

“In the last year, nearly 20,000 clients, including individuals and legal entities, have carried out operations in foreign currency through our branch network or through virtual web banking in an agile manner,” said Jaime Alberto Upegui, president of the Scotiabank bank. Colpatria.

Among the collections that do not exceed 2% are those of Finandina (1.50%) and Davivienda (1%). While Banco Caja Social and Banco Agrario do not charge commission for purchases abroad.

“Commissions for services charged to the bank they have a tendency to shrink or disappear. We see very frequently product offers with zero commission charges. It is important to extend this reduction to charges in Colombia for customer transactions abroad, it costs them double with the ingredient of the Representative Market Rate (TRM) ”, stated Wilson Triana, expert and consultant in banking and insurance.

Another very frequent question when making transactions is the TRM with which the transaction is charged, since the price of the dollar changes every day. The banks consulted responded that the TRM charged is that of the day the purchase is made. However, Bancolombia stated that with Mastercard and American Express the TRM is charged on the day the debt is paid and with Visa that on the day of the transaction.

Banco Falabella reported that “purchases made abroad will be settled by the respective franchise, converting the original currency of the transaction to United States dollars. Then, said sum will be converted into Colombian legal currency at the conversion rate. Said conversions vary depending on some factors such as: purchase rate, conversion rate, market opening rate and currency trading rate, among others ”.

Another important factor to take into account with purchases abroad is the number of installments to which the payment is deferred. Banco Falabella and Banco Itaú defer purchases at 24 installments, while Bancolombia and Banco Agrario do so at 36 installments.

“At Banco Finandina, the client has control and power over the term to which he wants to automatically defer purchases in person, online, abroad, or advances. Later, you also have the possibility of adjusting them to the term you want, “said the entity.

See also  Great Hopes for the Merger of Pelindo All

Despite the fact that in most financial institutions this is an automatic process, the client is the one who has the final decision. It is not advisable to pay 24 or 36 installments with an interest rate higher than 20% (the interest for international purchases is the same as for national ones and if it is a credit card, the rate tends to stick to usury, which for October is certified at 25.62%).

The client has the right to approach a bank branch and request that the number of installments be changed. If your pocket allows it, the most convenient thing for the user is to defer their purchases to a fee to avoid paying interest.