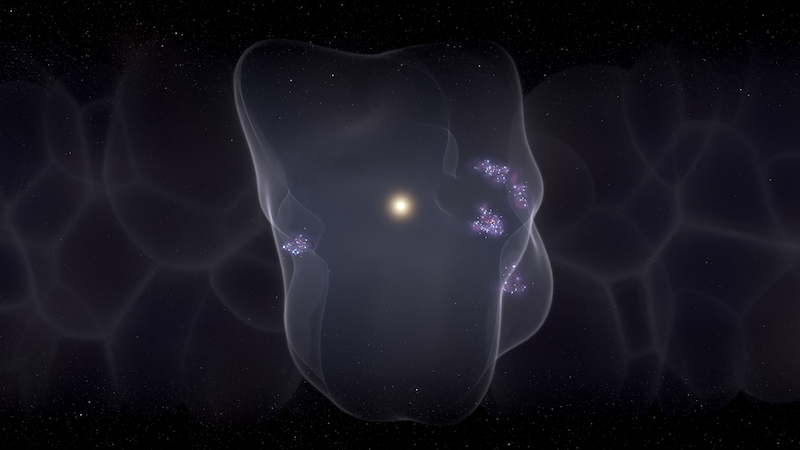 14 million years ago, the explosion of different supernovae caused the creation of a bubble on whose surface most of the stars close to our Solar System were born.

At this moment, the Earth and the rest of the Solar System are transiting right in the center of an immense structure known as local bubble, a void about 1,000 light-years wide surrounded by thousands of young stars.

And although the existence of the local bubble has been known since the 1970s, new research carried out jointly by the Harvard & Smithsonian Center for Astrophysics (CFA) and the Space Telescope Science Institute (STScI) has created a series of models that explain its origin and a 3d map of the material surrounding the huge bubble.

Through novel data analysis, the team was able to piece together the complex chain of events that led to the birth of the local bubble and therefore, to the origin of all the stars close to our Solar System:

Does 14 million years, the explosion of a set of supernovae caused interstellar gas to be expelled outwards, giving rise to an immense bubble-shaped structure that continued to grow for thousands of years, functioning as a perfect surface for the formation of nearby stars to our Solar System.

And although our Sun was far from the local Bubble when it was created, the team calculates that about five million years ago, its journey through the Milky Way coincided with this structure, so right now we are close to your center, a cosmic coincidence that the authors refer to as “a front row seat to seeing the star formation process happening across the surface of the bubble.”

Currently, the local Bubble continues to expand to about 6 kilometers per second and is composed of seven molecular clouds; that is, dense regions where stars form. The mapping of bubbles and the discovery of their origin will allow us to understand more about the influence of supernova explosions on the birth of new stellar regions and their evolution.

Are we alone in the universe? NASA proposes a new scale to identify extraterrestrial life

“Djokovic will not play Roland-Garros”: the announcement from France

Realize your dream.. car loans for owners of the National Bank and Banque Misr