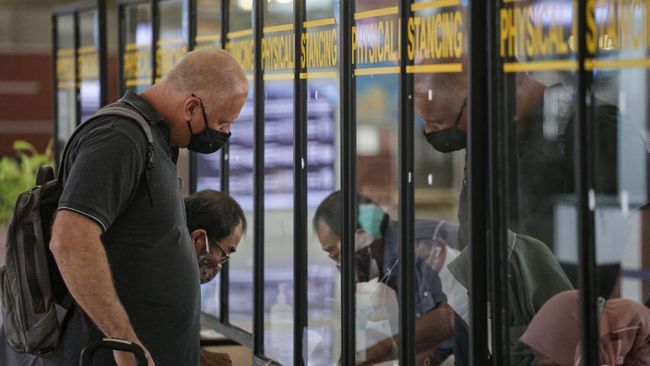 Ministry of Health (Ministry of HealthRI revealed that cumulatively at least 31,187 people entered Indonesia, 1,636 of them were declared exposed to the corona virus even though they had brought a free letter. Covid-19 from the authorities of the country of origin.

Or it can be said, of the total foreign arrivals, 3.5 percent of them are Indonesian citizens (WNI) and 0.8 percent of foreign nationals (WNA) who are also declared COVID-19. The data was obtained from the results of reports that were submitted during August 1-6 September 2021.

“There are still results entry and exit test positive, even though the newcomer has brought a negative test result as a condition of travel,” the Ministry of Health wrote in the data report received CNNIndonesia.com, Tuesday (14/9).

In accordance with Circular Letter Number 18 of 2021. Upon arrival in Indonesia, foreigners and Indonesian citizens arriving abroad are again tested by RT PCR and are required to undergo self-isolation for eight days.

Minister of Health Budi Gunadi Sadikin previously said that the best way to tighten the entrance is to air transportation.

Based on data, of the 431,603 that entered the Indonesian territory through five airports, 99 percent of them did so entry-test, and 82 percent exit-test. Meanwhile, for the sea route with 29,342 people, only 65 percent do it entry-test and 28 percent exit-test.

In addition, Budi also highlighted three countries that still recorded positive cases when their citizens arrived in Indonesia. He then questioned the capacity of each country’s examination laboratories.

“For this reason, we will immediately conduct bilateral cooperation with the Ministry of Health in the three countries to ensure that we limit what labs we can accept, which are properly certified by the local authorities to ensure that the PCR test is good,” Budi said at the meeting. Working together with Commission IX of the DPR which was broadcast through the DPR RI YouTube channel, Monday (13/9).

Furthermore, Budi also ensured that the Ministry of Health is currently monitoring specifically the three new variants, namely the C.37 Lambda variant, the B.1621 Mu variant, and the C.1.2 variant so that it does not spread further and have a bad impact in handling Covid-19 in Indonesia.

The former deputy minister of SOEs said that the Lambda variant has spread in 42 countries and is considered to have the ability to neutralize natural and vaccine-induced infection serum and certain types of monoclonal antibodies.

Meanwhile, Mu variants have been identified in 49 countries with the possibility of ‘avoiding’ the work of the human immune system. Currently, the World Health Organization (WHO) has also assigned these two variants to the Variant of Interest (VoI) category. While the C.1.2 variant which was first detected in South Africa is thought to be able to increase the transmission of cases.

See also  Conclusions of the first post-vaccination study in Romania: People who had COVID-19 to get a single dose of vaccine