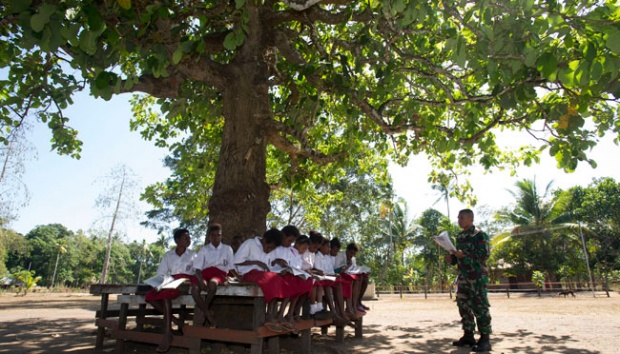 Students were trained by military personnel from the Indonesia-Papua New Guinea Border Security Task Force of the infantry battalion Satya Tama 713 on how to transport a stretcher and remove an accident victim, Head of the Information Service of the Cendrawasih XVII Regional Military Command Colonel Eko Daryanto said in a written statement released Sunday.

During first aid training, they also distributed “drug danger” stickers to the public.

The second lieutenant Syaban, the source of the training, expressed hope that the activity would give students the ability to help victims or friends on the first occasion they had an accident.

He said he and other task force members were delighted to see students participate enthusiastically in the training and distribute “drug danger” stickers among the local population.

Komar, the director of Nurp Huda Arso 2 of SMP IT, said that the program was helpful for students in shaping their characters when they helped other people.

Everything you need to know

Recalling the 10 deadliest diseases in history prior to coronavirus