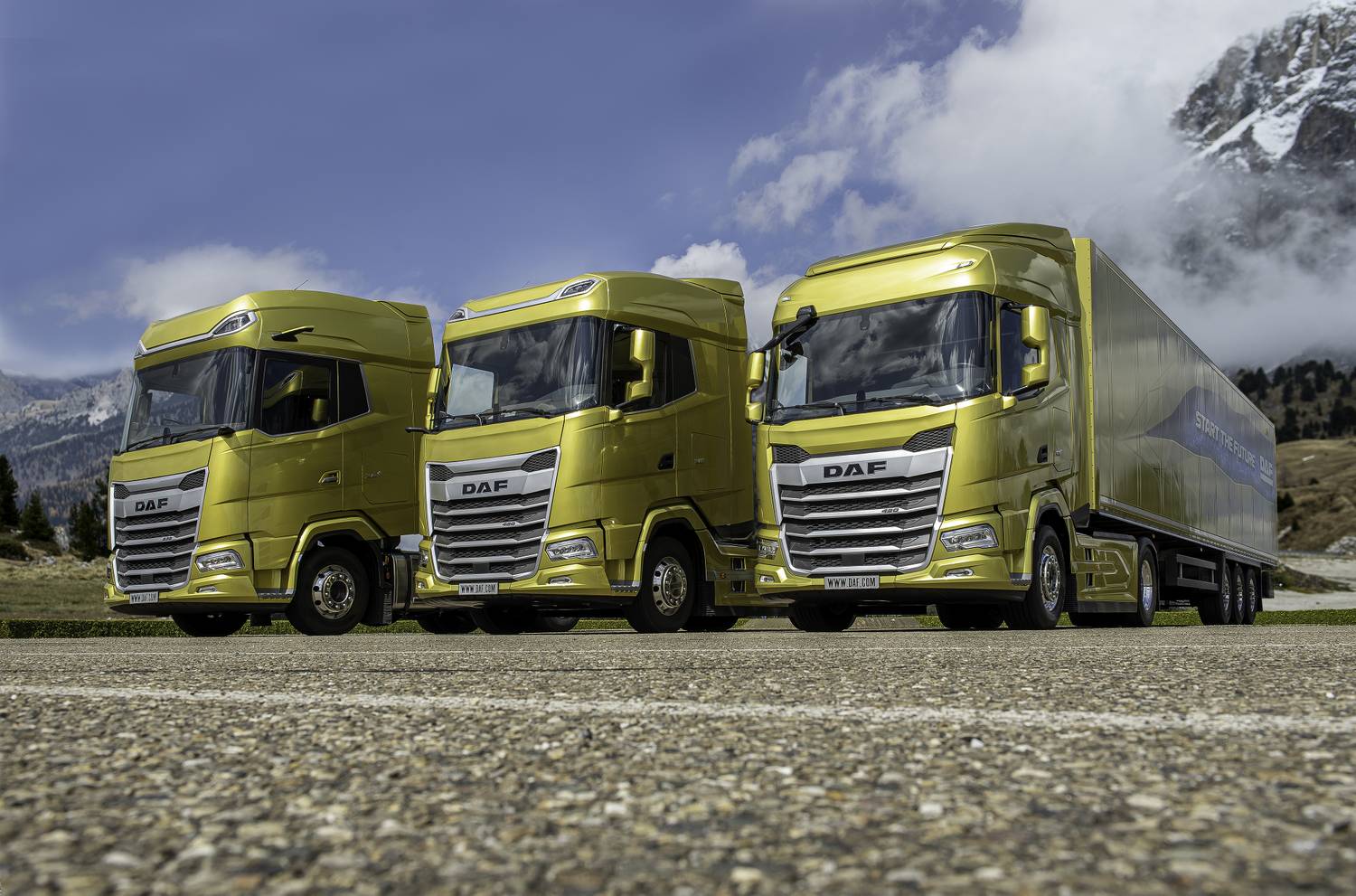 Going from right to left: the smallest is the XF, the middle is the XG, and the leftmost is the largest cab XG + versionGallery: DAF XF, XG and XG + truck family

DAF has now introduced the first three members of the new truck family. The formerly largest cab XF has now become the smallest member. The slightly larger version is the XG, and the largest cab variant is the XG +. For all three models, the first overhang was increased by 160 millimeters, creating a sloping, somewhat wedge-shaped front wall, achieving the best aerodynamic coefficient among European trucks. What exactly is cwvalue, it is not mentioned in the DAF press release, so we are forced to accept the statement’s statement without any basis for comparison. The length of the two (XG and XG +) premium cabs has been increased by 330 millimeters compared to the previous generation XF. Thus, it is probably not only according to the press release that it has become the largest-capacity series-produced truck in Europe. The new generation of DAF trucks can consume up to ten percent less fuel than previous models. This was mainly achieved by the designers of the new cab, which received new sealants and cameras instead of mirrors to keep air resistance as low as possible. For the new cabs, the Paccar MX-11 and MX-13 engines have been optimized and are available in the 367-530 hp range for the new XF, XG and XG + models. The service interval of these engines is otherwise 200 thousand kilometers, which will be very tempting for operators. The first overhang was longer, so the aerodynamics of the front wall were betterGallery: DAF XF, XG and XG + truck family

When designing the new cabs, the designers examined a number of variants and began a series of 20 million-kilometer tests to determine the best cab design. In addition to prospective operators, dozens of truck drivers took part in this. The testers mainly asked the designers to reduce the dead space, so DAF engineers fitted the cabs of the new truck family with larger window areas and even more to the right-hand door. peronablakot also built to increase drivers ’view from the vehicle. DAF also makes the drivers’ job easier Hands on Wheel, Eyes on Road (Your hands on the steering wheel, your eyes on the road!) philosophy that all the primary functions of the truck can be accessed via the steering wheel buttons and the switches on the steering column. Secondary functions (navigation and infotainment) are accessible via the touch screen display in the center console. DAF’s new cab design not only seeks the grace of drivers while driving, but also at rest. The largest XG + cab is 12.5 cubic meters, which is 14 percent more than the current largest DAF XF Super Space Cab. In the bunk of all available cabs, the driver’s berth is 2220 millimeters long, which is 800 millimeters wide in the XG and XG + versions, while only 760 millimeters in the plain XF. Operators may require additional extras to spend their rest time, such as a DAF Relax bed with a folding roof, parking and cooling (Park Airco), and dimmable LED interior lighting that also works from the application.

See also  the Japanese SUV which offers up to 1,800 km of free range per year The chassis of the new DAF trucks is also a completely new development, with a longer front overhang than before, including new front and rear wheel suspension, and a design that allows the platform to receive a hydrogen and an electric drive system in the future. This is the model palette in the first round. Newer versions are coming soonGallery: DAF XF, XG and XG + truck family

Over the next two years, the factory plans to renew the entire DAF range, with the soon-to-be-arriving hydrogen-powered XF as well as the new generation of DAF trucks and construction trucks. However, they still have to wait, as well as the new DAF XF, XG and XG + trucks to appear en masse on European roads, as the factory plans to start series production only in October.