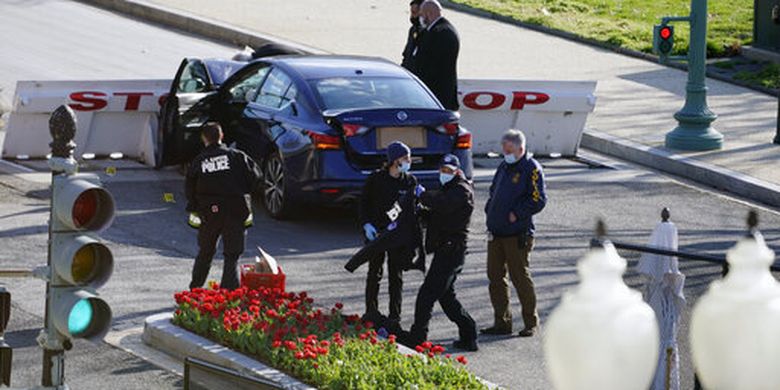 WASHINGTON DC, KOMPAS.com – There was the latest attack near the United States (US) Capitol Building on Friday (2/4/2021).

A motorist reportedly rammed his vehicle at the police and brandished a knife as reported Reuters.

As a result of the attack, a police officer was reported dead and several people were injured.

Police immediately locked up the Capitol Hill complex in Washington DC, USA. Police responded to the attack by shooting the assailant who later died.

The suspect then hit the barricade and got out of the car and attacked the police with a knife in his hand.

“It is with great, very heavy heart that I announce one of our officers has died of his injuries,” said Pittman.

Capitol police later identified the murdered officer as William “Billy” Evans, a senior police officer who had served for 18 years.

Also read: Joining the riots at the Capitol Building with other men, this woman is divorced by her husband

Meanwhile, Acting Head of the Washington Metropolitan Police Department Robert Contee said the motives of the perpetrators did not appear to be linked to terrorism.

“It doesn’t seem to have anything to do with terrorism, but clearly we will continue to investigate,” said Contee.

US President Joe Biden said he was devastated by the attack and ordered the flag in the White House to be lowered to half-mast.

In a statement, Biden said he was notified of an investigation into the attack on the Capitol Building.

Also read: US State Department Political Officials Accused of Being Involved in the Capitol Building Attack

The Washington Post, citing an anonymous source with knowledge of the investigation, identified the suspect as Noah Green and has his address in Virginia.

“Obviously this is someone who is actively trying to attack anyone or anything. At the moment we don’t know, “said Contee.

Also read: This is unfair, the Defendant of the Capitol Building Riot Shouts at the Court

The safeguards are reminiscent of the day following the storming of the Capitol Building by supporters of former US President Donald Trump on January 6.

In mid-March, US intelligence services warned of ongoing threats that racially motivated violent extremists, such as white supremacists, would carry out attacks on civilians.

The road to the Capitol Hill complex was blocked by police cars and people inside the Capitol Building were asked to stay away from the windows until the police finally announced that the lockdown had been lifted.

Also read: Feeling that there is still a threat, the National Guard is asked to guard the Capitol Building in 2 months