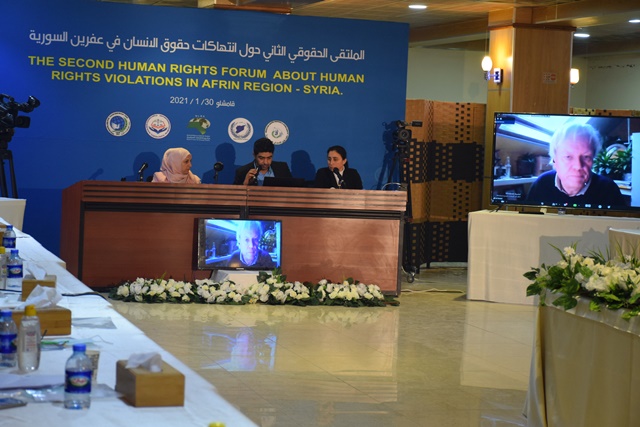 The third axis of the Second Human Rights Forum on human rights crimes in Afrin, Syria, included “the crime of occupation under international law”, through a conference given through Zoom by Jean Vermont, lawyer of the Bar Association from Brussels since 1989 and specialist in international, European and Belgian criminal law and international humanitarian law.

Vermont noted that the UN Charter stipulates in Article 2 (in Clauses 3 and 4) the following: All members of the Commission shall resolve their international disputes by peaceful means in a way that does not endanger peace, security and international justice. and that all members refrain from threatening to use force or its use against the territorial integrity, political independence of any country or in any other way that is incompatible with the purposes of the United Nations.

Jan Vermont indicated that Turkey exploits the self-defense clause to legitimize its invasion against Syria and occupied Afrin, noting that the resistance of the Afrin people was legitimate under the UN statutes, which clarifies in its clauses that it is a natural right if a group defends itself while under attack. . He said: “Turkey makes excuses to attack the Kurds in Syria.”

He emphasized that the crime of aggression, according to international conventions, is a crime of crimes because it is against humanity, and Turkey has committed this crime through its direct intervention in Afrin and Syria. The aggressor is tried under the Rome Statute of the International Criminal Court adopted in Rome, under article 8, which includes war crimes. The people of Afrin were subjected to torture or inhuman treatment, deliberately inflicting severe suffering or serious damage to the body or health, and widespread destruction and seizure of property without justifying military necessity and in violation of the law and in a manner absurd.

Vermont explained that Turkey used mercenaries in its aggression against Afrin, contradicting the charters and principles of the United Nations.

He indicated that Turkey’s main objective was to hit the Autonomous Administration there, and stressed that the crime of aggression should be pointed out because all crimes were committed under its roof.

The interventions emphasized the need to intensify efforts to stop the crimes committed by Turkey against the people of Afrin, and then work to end the Turkish occupation, compensate those affected in all respects, and prepare detailed files on all crimes.

The work of the second human rights forum in Afrin will conclude with the reading of a declaration that includes recommendations and results.