Cloving hospital on the basis of the Medical Scientific and Educational Center (ISSC) Moscow State University named after M.V.Lomonosov took the first patients on April 21 and completed his work on June 13. It turned out that it was possible to achieve the best treatment results for COVID-19 in Moscow. Over the entire period, 4 patients died, and among severe patients who got mechanical ventilation, the mortality rate was less than 14% (for comparison, the average for the city and the world was up to 70 – 80%). Eighteen doctors out of 220 employees of the hospital were infected with coronavirus, there were no deaths among the medical staff.

MEDICINE FOR COUGH FOR 80 RUBLES

– Most of those who are ill or are afraid to get sick are worried about fibrotic changes in their lungs. They say that you have developed special therapy that can reduce the risk of developing fibrosis. Is it possible?!

– Yes, we launched an appropriate clinical study. There are no final results yet, but we have developed clinical practice.

“What did you do to save the lungs?”

– We used a combination of bromhexine and spironolactone (both are long-known very cheap drugs. – Ed.). Bromhexine is an expectorant that has been prescribed to patients with pneumonia and cough for many years. At the same time, experimental data showed that this drug can block a specific enzyme and impede the penetration of coronavirus into cells. True, it was on this effect that we counted to a lesser extent in inpatients, since such an effect is important mainly in the early stages of the disease. But the expectorant effect of bromhexine really helps patients with COVID. I heard that our colleagues in Peter launched a study of bromhexine for prophylactic purposes. We will wait for the results.

Coronavirus infected 18 doctors from 220 employees of the hospital, there were no deaths among the medical staffPhoto: Ivan MAKEEV

– The second drug – spironolactone – is traditionally widely used in cardiology for the treatment of heart failure, severe hypertension. It has a small diuretic, magnesium and potassium-preserving effect, continues Yana. Orlova. – It has several mechanisms through which it can be useful in coronavirus infection.

Firstly, a mechanism that prevents the development of fibrosis in general in the body. There are works that, in particular, show that spironolactone reduces fibrosis in the heart. At the same time, it is known that the tendency to fibrosis is not local, but systemic – where there is more inflammation, there will certainly be fibrosis. And we see, of course, fibrotic changes in the “covide” in our patients. Therefore, we prescribed spironolactone as a drug for the prevention of this process.

Secondly, this drug blocks sex hormone receptors, in particular testosterone. Some published studies suggest that “high-testosterone” men suffer from “covid” more often and develop more severe fibrotic changes. Therefore, blocking these receptors for several weeks during COVID treatment may be useful in reducing the severity of complications. We are not talking about a longer intake, since male patients are unlikely to agree with a decrease in testosterone levels in the long term.

And perhaps the most important point. In almost all of our patients, we observed hypokalemia (a decrease in potassium levels. – Ed.). With coronavirus infection, potassium is intensely excreted from the body, and scientific articles even suggest that hypokalemia serves as the trigger for a cytokine storm. So spironolactone has a real chance to reduce the risk of this dangerous complication. But the main thing, in my opinion, is that lowering the level of potassium in the body is extremely harmful to the heart and triggers life-threatening rhythm disturbances, increasing the risk of sudden death. We, like all others, replenished potassium with droppers, but it was more effective to retain it in the body with the help of spironolactone. 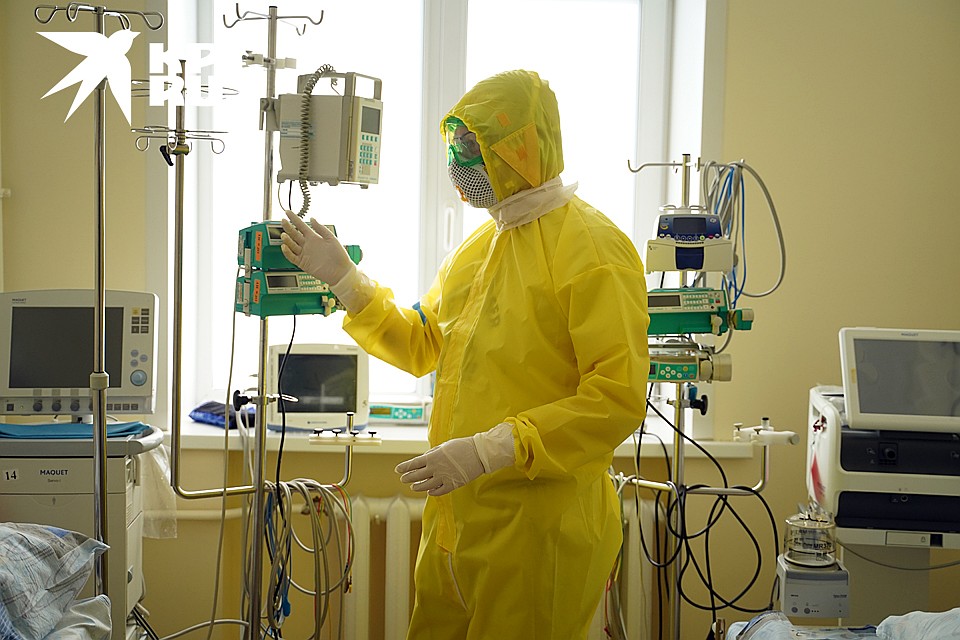 – Yana Arturovna, how many patients did you have on average?

– Have you noticed signs by which it can be assumed that the disease in the person brought is likely to go the hard way?

– Such studies were carried out in the world, our clinical practice confirmed them. Men certainly get worse than women; the elderly are heavier than the young; overweight people are heavier than overweight patients. Men with a classic male type of baldness, a lot of facial hair, we can say brutal men get sick harder.

– Under what conditions did you discharge patients?

– We acted as close as possible to the recommendations Ministry of Health: so that the temperature for three days was not higher than 37.5 degrees; so that C-reactive protein (an indicator of inflammation) is lower than 10 mg / l, and saturation, that is, the level of oxygen in the blood, is higher than 96%.

“HEAD OF EPIDEMIOLOGY DEPARTMENT OF ITSELF WORKED AT SANPROPUSNIK”

– How often do you get sick doctors and nurses?

– In the first month no one got sick at all. We have a very powerful epidemiological service. The head of the sanitary-epidemiological department, a senior researcher, correctly organized the whole process, and for the first two weeks she personally worked in the sanitary inspection room at the exit from the “red zone” and helped doctors and nurses who were exhausted after the shift safely remove protective clothing.

Then both people’s fatigue and viral load accumulated. By the middle of the second month, sick people began to appear. There were no seriously ill patients. We treated part of the staff in our observation, part of it was treated at home. In total, 18 people were infected from the medical staff (less than 10%).

– I saw the recommendations of American nutritionists, they speak out positively about taking zinc, melatonin and vitamin C. There were somewhat conflicting data on vitamin D. But we did not give any such recommendations to our employees. We have all the prevention was associated with minimizing contacts and other measures of epidemiological safety.

Physicians are the heroes of our time.“If you think that you are special and that a pandemic will not affect you, you are deeply mistaken,” listen to what the doctors who are fighting with coronavirus say

“They used a cure for gout against COVID”: How patients were treated in a hospital that showed the best results in Moscow

The results of treatment at the university clinic of Moscow State University were the best in the capital. “Komsomolskaya Pravda” learned the details of how doctors and scientists saved severe patients [Часть 1]