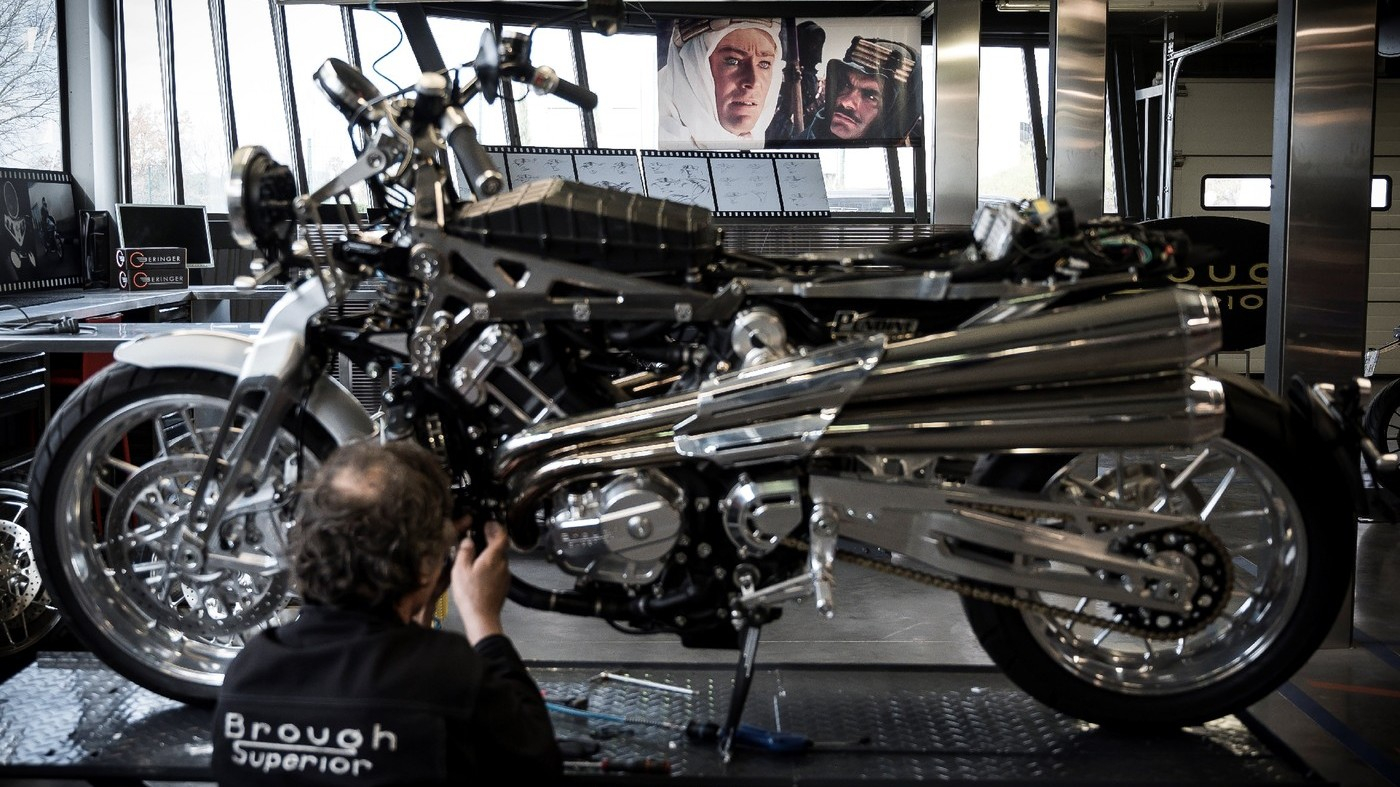 “For me, Brough was the most beautiful brand”, launches Thierry Henriette, CEO of Brough Superior, a legendary English brand from the interwar years, which now produces the “Rolls Royce” of motorcycles in the region of Toulouse, in the southwest of France.

“It’s inheritance theft, but if it’s done well, the English forgive everything,” adds Albert Castaigne, the general manager, explaining that the new Broughs have been dubbed by the English club of the brand, whose members made the trip to Toulouse with their 1930s mount.

But it was Lawrence of Arabia who completed the legend of these mounts. He owned seven and lost his life riding the sixth, without having been able to take advantage of the last.

The British spy crisscrossed the English countryside on his Broughs, and even participated in their development. Requisitioned for the war effort, the Nottingham factory stopped making motorcycles in 1940.

At auction, “historic” examples of these machines can reach 500,000 euros.

In 2021, the ultra modern Brough Superior plant, an aluminum vessel installed in Saint-Jean, near Toulouse, will deliver around a hundred motorcycles.

“We have customers in a dozen countries in Europe, in Russia, Australia, Mexico and soon in the United States,” says Thierry Henriette, who acquired the brand in 2018.

“Brough Superior is the only luxury motorcycle brand in production” with three “neo-retro” models in the catalog. The latest, the SS 100, is the contemporary reinterpretation of Lawrence of Arabia’s motorcycle. The range has been completed with a scrambler (all-terrain motorcycle), “the Sand racer pendime”, and the Anniversary which celebrates the centenary of the brand with an art-deco aesthetic.

The prices of these three models fluctuate between 60,000 and 100,000 euros … “excluding special requests”.

Patrick Blandinet, a Guadeloupe business manager, came to France especially to visit the factory, “have fun” and personalize the bike he ordered. “I requested a gold leaf logo on the tank,” he says.

This 60-year-old is truly captivated by the quality of the materials. “It’s a gem”, exclaims this fanatic “of sports motorcycles”, who raced “a few years ago”.

The acquisition of Brough Superior is “the culmination of 40 years of career”, affirms Thierry Henriette, an enthusiast who was first a motorcycle dealer in the pink city at the end of the 70s before founding his company Boxer Bikes .

Brough’s takeover took shape in 2013, when Thierry Henriette met Mark Upham. This Englishman bought the Brough Superior brand in 2008 and aims to create descendants of the famous machines.

In 90 days, a model is produced for presentation at the Milan motorcycle show. The reception of the public is dithyrambic, about thirty machines are ordered.

The adventure is launched, first with a production under license until the takeover of the brand. Today, the news is the release of “the Brough of the 21st century”, according to the phrase of Thierry Henriette: a “modern” model, “the Lawrence”, which abandons the aesthetic codes of the past.

The other novelty is the collaboration with the famous prestige car brand Aston Martin, for which Brough produces his first motorcycle: the AMB 01. Ten of these futuristic Aston Martins are being assembled.

The Toulouse plant has a constant link with its aeronautical subcontractors. The motorcycles are sparkling with chiseled parts in noble materials: titanium, carbon, stainless steel …

“Of our 80 subcontractors, two-thirds are from the region, most of them work for the aero sector”, underlines Albert Castaigne. A local supply chain “indispensable”, he says, for a small manufacturer that assembles its own engines and chassis.

“French luxury” is combined here with an attention to detail taken to the extreme, on which Thierry Henriette is intractable: “Me, I want all the parts of the motorcycle, we can put them on a table and say they are beautiful and technically interesting! “.