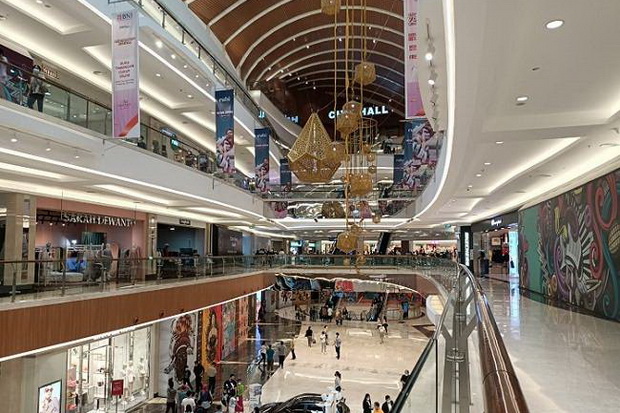 JAKARTA – Transparent glass floors are the main attraction Pondok Indah Mall III (PIM III) to be a community destination on the first day of a holiday Lebaran 2021 . The PIM III complex belonging to PT Metropolitan Kentjana Tbk, which was inaugurated just four days before Ramadan, immediately caught the eye.

From the monitoring of MNC Portal Indonesia at 17.00 WIB or after several hours of Eid prayer, residents were busy visiting one of the shopping area elite in South Jakarta.

Rizki, a resident of Pamulang, South Tangerang, admitted that he visited PIM III with his family. Their arrival is to buy a number of household necessities.

Even so, the transaction process is not only the main reason for Rizki and his family to spend time during this year’s Eid holidays. He admitted that a number of new outlets and spots available in the mall stole his attention.

It is recorded that this 39-year-old man has visited the property business owned by the issuer with the ticker code MKPI.

“For the new mall, Pondok Indah, we have been here three times. Yes, apart from shopping, one thing that we are looking for is a spot that can feel the atmosphere (see-through glass floor), can feel standing on this glass with a height of 20 meters,” he said. Jakarta, Thursday (13/5/2021).

The new spot presented by Metropolitan Kentjana management stole his attention. From the observation at the location, a number of visitors who had arrived first were seen taking pictures or taking selfies on the glass floor.

In fact, officers have to arrange a certain scheme so that the implementation of health protocols by keeping a distance can be applied to visitors in that spot. This is what makes the visitor queue.

Also read: Mayor of Bogor and Kapolresta Sidak a number of shopping centers, check the results

Previously, the Vice President Director for Metropolitan, Kentjana Jeffry S said that after the inauguration there was an increase in visits to the Puri Indah mall that had not occurred significantly. Occupancy is predicted to increase during the second week after the first day of fasting.

“We’ll see, because if the government doesn’t allow the homecoming regulation, maybe people in Jakarta will spend a lot of their time, maybe going to the mall to eat or shop, maybe that’s the way it will be,” said Jeffry.

The management also hopes that the mall visitor traffic this year will be higher and will boost the company’s performance compared to 2020 when the mall is not allowed to open.

Is an inflationary apocalypse awaiting us? – Roklen24.cz

The uniqueness of what happened in Israel, working on Sundays until soldiers not on duty still carry weapons