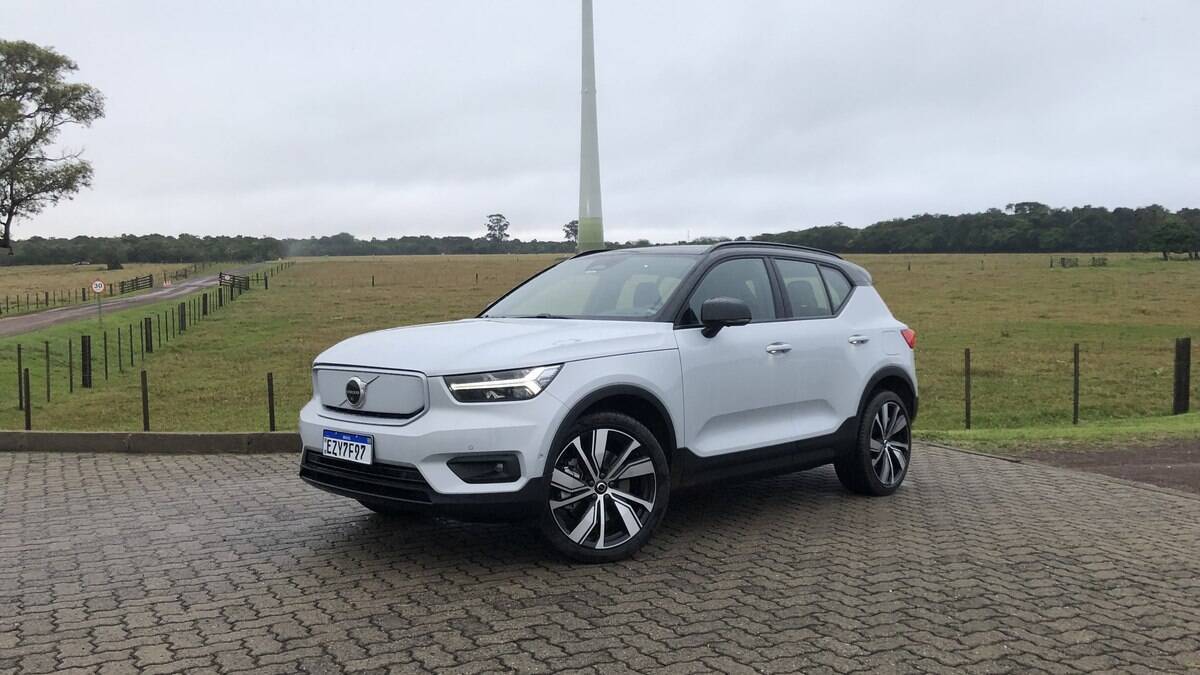 Volvo do Brasil conducted a study with its customers, revealing that 90% of consumers who bought an electrified car do not intend to go back to using only combustion models.

No wonder, Brazil – along with Norway – was one of the first markets to completely electrify the catalog. All Volvo vehicles available in the country have at least one hybrid or electric version
. The new XC40 Recharge Pure Electric
is another chapter of this story.

Our report went to Porto Alegre (RS) to get to know the news first hand. All participants in the event underwent two PCR tests to identify the new coronavirus, ensuring everyone’s safety.

As well as the entire line XC40
imported to Brazil, the Recharge Pure Electric
is produced in Ghent (Belgium). In comparison with the conventional model, the electric one gains protection in the front grille, since the system does not need cooling to work.

The other way to identify the XC40 Recharge Pure Electric on the street is the unique 20 rim wheels, plus a new metallic green color
which will initially be part of the electrified catalogue.

The differences continue when it comes to opening the door and having fun behind the wheel. Unlike any other car I’ve ever ridden, the XC40 Recharge there is no power button
the vehicle, nor the parking brake.

Just open the door, get into the driver’s seat with the key in your pocket, put the gearshift lever in the ‘D’ and drive away. You will have to explain this every time you leave the car with the valet.

You will also have to explain that the Volvo XC40 Recharge
it is extremely skittish despite being an ‘entry’ electric SUV. Despite almost 2.2 tons, the model accelerates like a German sports car, reaching 100 km/h in a measly 4.9 seconds.

Any stroke of the throttle instantly dumps 408 hp of power and 67 kgfm of torque. This force extraction was only possible thanks to the two electric motors
of 204 hp mounted on the front and rear axles.

The top speed has been limited to 180 km/h for security criteria
. The manufacturer’s goal is that by the end of this decade, no one will die or be seriously injured in their cars around the world – even if that means preventing their customers from unceremoniously accelerating.

The autonomy of 400 km in urban cycle is consistent with the Audi e-tron
, its main rival in Brazil. The coolest thing is that, unlike other electric models, this number does not drop when you turn on the air conditioning. What can affect autonomy is its path, since electric models
they are not designed to run for many hours on the road.

Even so, the team at Volvo
managed to take the XC40 fleet from São Paulo (SP) to Porto Alegre (RS) with some breaks to recharge the battery in the interior of Paraná and Santa Catarina.

The compact size makes the XC40 very dynamic and easy to steer
in the city. There is enough space for four adults and one child to travel in comfort. Because of the batteries, the trunk dropped from 452 to 414 liters.

Currently, the Audi e-tron
it is the best-selling electric SUV in Brazil, and Volvo’s goal is to take the crown. Maybe this year this will not be possible, as the next batch of XC40 Recharge Pure Electric
is scheduled to arrive only in 2022.

Compared to its German rival, the XC40 is considerably cheaper. It starts at BRL 389,950, while the e-tron
it costs R$ 529,990 in its cheaper version. So it’s hard to imagine that the Audi
can hold the lead.

In a few weeks, we’ll have both models in our garage for another electrified comparison. Regardless of the winner, these SUVs only prove critics of electric vehicles wrong.