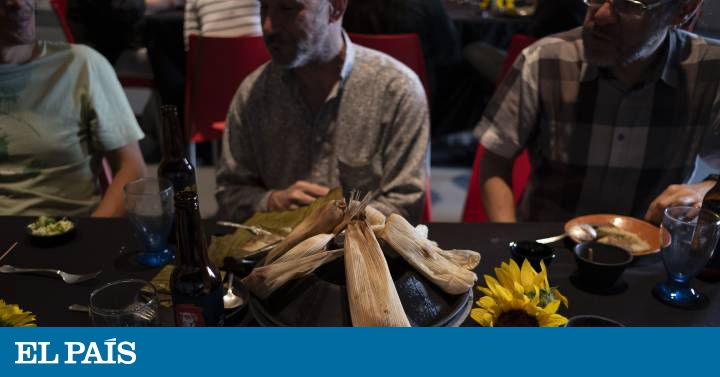 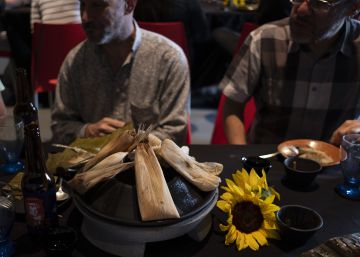 Kisses elbow, nervous smiles: “No, no, now better without hands, that virus is there,” says one of the first to arrive in the room. It is Saturday, two in the afternoon. The heat is tightening in Mexico City as guests to Moctezuma’s banquet begin to fill the dining room. More than one reaches out and immediately picks it up, perhaps aware of a change in the norm that is being imposed; of a memory, that of the last epidemic, that of H1N1. In Mexico, where there are greetings that look like operas – handshake, hug, clash of hands, pat on the back – the coronavirus has not yet arrived, although there are already responsible citizens who are beginning to become aware of the matter.

About 25 diners gradually enter the banquet hall, in the upper part of the Cultural Center of Spain in Mexico. It is a renovated house in the center, overlooking the cathedral and a handful of other churches, next to the plinth and the ruins of the Templo Mayor Mexica. Everyone comes up with the same idea: to approach the menu of the last tlatoani before contact with the Old World. A sumptuous, ceremonial menu. Do it here, so close to the core of old Tenochtitlan.

While waiting for the menu, attendees drink lemon water, Malinalco mezcal and Cortés beer. From the terrace, in the dome of one of the churches, it can be read: “Deliver us lord of all evil”. Beer, explains Miguel Utray, director of the center, is made by a businessman in Amecameca, a municipality in the State of Mexico, not far from the route taken by Hernán Cortés 500 years ago, on the way to Tenochtitlan. The label is the face of the Extremaduran.

Once the arrival is over, the elbows on the table calm, the historian Federico Navarrete talks with the ideologue of the feast, Rodrigo Llanes, cook and historian. Remember the passage from the True History of the Conquest of New Spain, where soldier Bernal Díaz del Castillo narrates the first meeting between Cortés and the sovereign of the Mexicans, Moctezuma. It was in November 1519. Cortés, excited, jumps off the horse and goes to greet the tlatoani. When she wants to hug him, her entourage prevents her. Five centuries later, the table is filled with laughter. Not that Cortés will infect you with coronavirus.

With tousled and ashy hair and a half smile on his lips, Llanes works with the cook on the last details. On some tables there are dozens of little bowls with dried fruits and further back, as many bowls with green tomato salad. “There are no reports that say exactly what Moctezuma ate,” explains Llanes, who mentions tortillas, tamales and atole. “We knew that he ate alone. They presented him the dishes, ten dishes from each stew, which were 30, and he, with a wooden wand, pointed to the dishes he wanted.”

The cook, Rosalba González, originally from Oaxaca, takes a look at the mole, the star of the star dish: red mole with duck meat. “I roast the chilies,” she says proudly, “but like that, little by little, so they don’t burn. Then you have to wait for the smoke to go away. You let them rest for a week. And then you soak them three times. Then you already mix them with walnuts, almonds, chocolate, plantain “and the long etcetera of ingredients that the mole has.

See also  "Enigma": they find a Nazi encryption machine at the bottom of the sea

Llanes directed the kitchen of the restaurant The revelry in Mexico for 25 years. This after studying history and graduating with a thesis on the culinary subsistence of Cortés and his men on their journey from the coast of Veracruz to the highlands. From his kitchen, Llanes fantasized about the stories of the Extremaduran and his soldier, Díaz del Castillo; the sumptuousness of the tlatoani banquet, which both witnessed at the end of that year, 1519. “At lunch, his cooks had him on thirty ways of stews, made in his own way and style,” says Díaz del Castillo. “And they had the stalls in small clay braziers underneath, so that they would not get cold, of what the great Montezuma had to eat they cooked more than three hundred dishes, without more than a thousand for the guard (sic) people.”

In 2017, Llanes teamed up with the UNAM Industrial Design Research Center to recreate the tlatoani tableware. Vessels carved in obsidian, basalt vessels for tamales, as well as more than 300 pieces, based on the archaeological findings of the Templo Mayor. Then he and other chefs, like González, began to think about the content. The first time they recreated Montezuma’s banquet was in The revelry in 2018. Each time a different chef is commissioned, who imagines what the banquet could have been.

In the room, the waiters begin to draw soups, first of pumpkin flower, then of nopal, of bean … They are small portions, the idea is to try about 20 different dishes. Later the tamales appear, some in corn leaf, others in banana leaf. Smells like holy leaf and epazote. It smells like corn, the aroma given off by this city from birth to daybreak, a path made of guajolotas, chilaquiles, enchiladas, quesadillas, sopes, atoles … Then comes the mole, which causes intense silence in the room .

See also  Provinces are empowered to confirm positives without swabs - Together

On the terrace, the horizon begins to darken with clouds: there is little left for the rainy season. The sky takes on a grayish hue with brown undertones. After accounting for the mole, Llanes and González serve saucepans full of chocolate and trays with sweet bread. It is the beginning of the end.

Llanes, who has not stopped serving dishes in almost three hours, sits down and speculates on the meaning of the 300 dishes. Why did they divide the 30 stews that were cooked daily for the tlatoani into ten portions? “I think it has to do with the symbolic numbers of the Mesoamerican world,” he says. Llanes refers to the 400 stars, the sisters of the Coyolxauhqui, sister in turn of the warlike deity of the Mexica, Huitzilopochtli. According to the myth, the 400 stars and their sister attack the mother and the son. Huitzilopochtli defends himself and ends up killing Coyolxauhqui And somehow, thinks Llanes, more fun than anything else, all those stars end up becoming the tlatoani’s banquet.