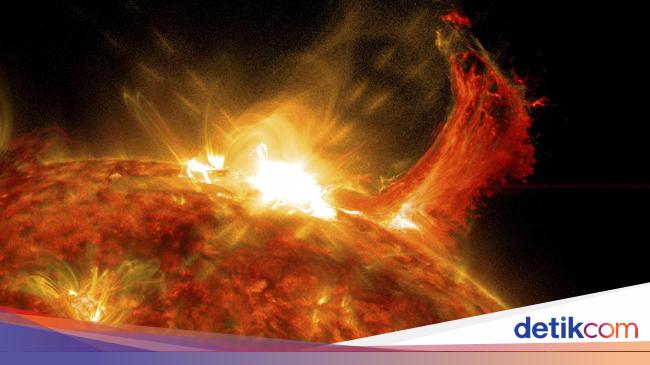 Jakarta – Recently, scientists from the United States revealed the findings of a solar storm that could cause an ‘internet apocalypse’ on Earth. The findings were presented at the SIGCOMM 2021 conference virtually August 23-27.

According to research presented by Assistant Professor at the University of California, Sangeetha Abdu Jyothi, there is a possibility that solar storms occur and can disrupt internet connections on Earth.

In his research paper, Abdu Jyothi said extreme solar storms could result in an ‘internet apocalypse’ that would make it difficult for most of the population to connect to the internet for weeks or even months.

“What really makes me think about this is during a pandemic we see how the world is not prepared to deal with it. There are no guidelines for dealing with it effectively and it will also happen to internet disruption,” Abdu Jyothi told Wired, as quoted from LiveScience, Wednesday (8/9/2021).

According to him, there is no protocol to deal with it effectively, including internet security. Existing infrastructure is not prepared for large-scale solar storm phenomena.

This preparation is still minimal because the phenomenon of super solar storms is very rare. Scientists also estimate the probability of an extraterrestrial weather phenomenon having a direct impact on Earth between 1.6% and 12% per decade.

“If a super solar storm occurs, it can cause a geomagnetic storm in the Earth’s atmosphere. This is because magnetic particles enter Earth at a speed of millions of kilometers per hour,” he said.

When do solar storms occur?

In the last century, only two extreme solar storms have been recorded, in 1859 and 1921.

The solar storm that occurred in 1859, also known as the ‘Carrington Event’, caused the telegram cable to catch fire, so that the aurora that normally only exists at the poles was seen in Colombia.

Even a relatively small solar storm also has a significant impact. Like a solar storm in March 1989 that made the Canadian Province of Quebec lose power for nine hours.

The impact of the solar storm

Since today the world’s population is highly dependent on the internet, Abdu Jyothi also explained the impact of a giant geomagnetic storm on the internet infrastructure on Earth.

It’s different with the underwater internet cable that connects countries and even continents. These cables are equipped with repeaters to boost optical signals which are placed every 50-150 km.

The most affected areas are the Northern Hemisphere, including the United States and the United Kingdom. This region is the most vulnerable to extreme solar storms and if one occurs it will be those countries that will lose internet connection first.

“The economic impact of a single day of internet disruption in the US is estimated at around USD 7 billion. What if the network remains out of service for days or even months?” he explained.

To anticipate the possibility of an extreme solar storm that occurs, Abdu Jyothi suggests several things that can be done. For example by placing submarine cables at lower latitudes, and developing robustness tests that focus on the effects of large-scale network failures.