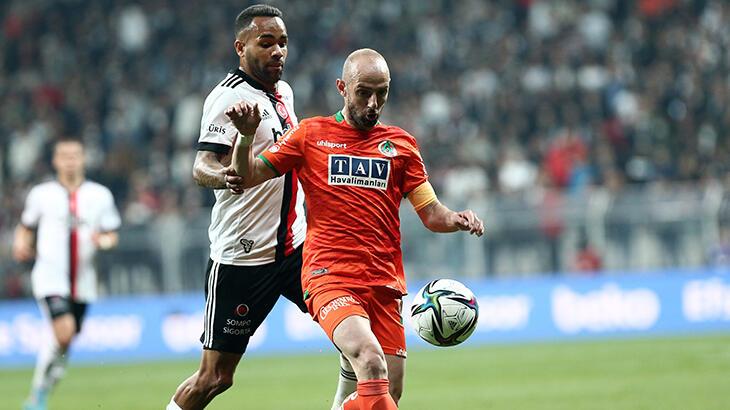 Beşiktaş hosted Alanyaspor in the 32nd week of the Spor Toto Super League Ahmet Çalık Season. The tough fight was played at Vodafone Park. Volkan Bayarslan blew the whistle in the critical match. Beşiktaş – Alanyaspor battle was completed with the 4-1 superiority of the black-whites.

With this result, Beşiktaş increased to 50 points. Alanyaspor, on the other hand, had 52 points.

MINUTES FROM THE MATCH

Beşiktaş took the lead in the second minute. Batshuayi, who hung behind the defense with Ghezzal’s pass, sent the ball into the net with a hard hit from the right diagonal after entering the penalty area: 1-0.

Alanyaspor equalized in the 23rd minute. Tayfur Bingöl, who hung behind the defense with Novais’ pass, went down to the line and turned it inside from the ground. Efecan’s kick, running to the front post, went into the net: 1-1.

Beşiktaş took the lead once again in the 25th minute. After Rıdvan’s long throw, the ball that Alanyaspor’s defense wanted to remove was left in front of Rosier outside the penalty area. This player’s kick was a pass to Josef in the left diagonal of the penalty area. After controlling the ball, Josef blew the nets with his shot: 2-1.

Beşiktaş increased the lead to 2 in the 43rd minute. Rosier, who met the ball in the right lane after short passes on the opponent’s field, made the cross. Batshuayi, who controlled the ball with his chest in the penalty area, sent the leather ball into the nets from the left of the goalkeeper Marafona with a shot from the left diagonal: 3-1.

The first half of the fight ended with Beşiktaş’s 3-1 advantage.

Ghezzal, who met the ball just above the penalty area line in the 65th minute, shot with his right foot after getting rid of his opponents. Goalkeeper Marafona tackled the ball at the last moment. The ball that opened to the side N’Kooudou turned it in without hesitation. Güven could not put a foot on the ball that went parallel to the goal.

Beşiktaş scored another goal in the 78th minute. Güven Yalçın, who hung behind the defense with Rıdvan’s pass in the attack developing from the left wing, sent the ball into the nets with a shot from the left diagonal of the penalty area: 4-1.

There was no other goal in the match and Aytemiz defeated Alanyaspor 4-1 in the Beşiktaş field.

NOTES FROM THE MATCH

In the 32nd week of Spor Toto Super League, Aytemiz hosted Alanyaspor in Beşiktaş field. Volkan Bayarslan blew the whistle in the match that started at 20.30 at Vodafone Park. Kamil Çetin and Samet Çiçek were the assistants of Bayarslan.

Beşiktaş Coach Valerien Ismael took his team to the field in the Alanyaspor match, without making any changes, in the 11th of the match that was drawn 1-1 with Trabzonspor on the road. Entrusting the castle to Ersin Destanoğlu, Ismael formed the defense trio of Welinton, Vida and Montero. Assigning Rosier, Can Bozdoğan, Josef and Rıdvan in the middle four, Ismael put Ghezzal on the right of the offensive line and Alex Teixeira on the left. Michy Batshuayi was Ismael’s choice for goal ways.

See also  Remco Evenepoel recovered after an attack more than 50 kilometers from the finish, the breakaway resumed (direct)

The coach of the black-and-white team, Valerien Ismael, took the lead in a home match for the first time. After taking office in Beşiktaş, the French coach, who played his first match away from Trabzonspor, played for the first time in a match in the home field with the Alanyaspor match. Ismael had previously met with the fans at the training held in the stadium, which was open to the fans. Black and white fans kept the tempo for a long time in favor of the French coach before the match started.

In the match where Beşiktaş hosted Aytemiz Alanyaspor, black and white fans filled the stands. In the middle of the week, Brazilian midfielder Josef de Souza invited Beşiktaş fans to the match with his social media posts. Along with the programs made by the fan groups, the majority of the tickets that were on sale before the match were sold out. Beşiktaş fans showed great support to their teams and showed love before the match.

EMRE WAS NOT FORGOTTEN BEFORE

Besiktas boxer Emre Erkenler, who lost his life in the past days before the match, was not forgotten. The Beşiktaş player passed away recently. Before the match, a moment of silence was held.

ONE CHANGE FROM FARIOLI

Aytemiz Alanyaspor Coach Francisco Farioli made only one change in 11 of the Çaykur Rizespor match, which was won 2-1 in the 31st week of the Super League. The young coach took Umut Güneş to the field against Beşiktaş instead of Emre Akbaba.
The 11 of the Akdeniz team against Beşiktaş are as follows:

See also  Nail Yakupov is exchanged from the "Vityaz" in "Cupid"

In Beşiktaş, Brazilian defender Welinton Souza was suspended with a yellow card during the Alanyaspor match. In the black-and-white team, Welinton, who played Aytemiz Alanyaspor with a yellow card penalty, was shown a yellow card when he pulled Tayfur Bingöl out of his jersey in the 46th minute of the fight. With this card, Welinton will leave his team alone in the away game of GZT Giresunspor in the 33rd week of the Super League.

Black and white fans gave their teams great support throughout the match. The fans of Beşiktaş, who were relieved in the match with Güven Yalçın’s goal, showed love to their new coach, Valerien Ismael. Besiktas fans cheered for a long time in favor of the French coach because of the team’s willing play and the score to come to 4-1.

Scorecard of the MATCH

After the miracle of Panathinaika in Istanbul, the final place of “Žalgiris” in the Euroleague was revealed