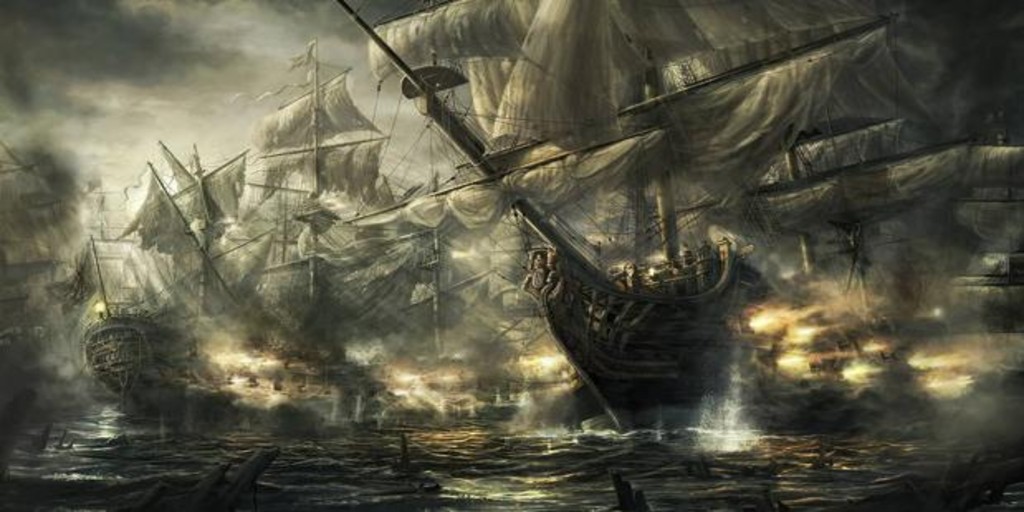 The night of September 22, 1568, went tense in Veracruz, Mexico. The fleet of the Indies commanded by the captain general Francisco de Luján he had reached the port just five days after the dreaded pirate John Hawkins, who, secretly protected by the Queen Elizabeth I of England, he had spent almost six years dedicated to threatening, stealing, kidnapping, extorting and attacking the Spanish overseas colonies with total impunity until that moment.

We are in the year of the “status quo” between Spain and England. Queen Elizabeth had promised to repress, using her almighty Royal Navy, the murderers, thieves and rogues who roamed freely across the Atlantic. He had to respect the lucrative Spanish trade with the New World, although, in reality, under rope, Queen Isabel gave these coverage and protected them with the only condition that they only hurt the properties of King Philip II.

The writer and historian Víctor San Juan puts two examples of this ruinous behavior of England in his latest book, “Twenty-two naval defeats of the British” (Renaissance, 2019). One starred her Pedro Menendez de Aviles, who captured five English ships of the pirates Champneys and Poole, who had captured a Spanish slump from America, violating the aforementioned truce between Felipe II and Isabel I. However, when they were handed over to the English courts to be tried in their own country, they were immediately released. And the same thing happened shortly after with another feared pirate, Thomas Cobham, who seized ships from Flanders worth 40,000 ducats and, when the Spanish monarch also delivered him to England and was sentenced to death, he had to see how immediately afterwards he was also pardoned. It was almost an insult.

«Spain had declared a monopoly over America, which Felipe II defended in a legalistic way, appealing to the Pope and other European monarchs. Meanwhile, Queen Elizabeth, more practical, was submissive to him, but encouraged flagrant interference by English merchants in this traffic. The sovereign thus created waters conducive to the appearance of traffickers of few scruples, smugglers, blacksmiths, straperlists and simple looters. And not happy with it, he also put Royal Navy ships like the Jesus of Lübeck available to subjects of doubtful reputation such as John Hawkins, who, despite his respectability, would soon be part of those, ”explains San Juan.

We entered into one of the darkest times of the Royal Navy, participating in actions that not only did not feel proud, but also tried to hide and wanted to continue hiding in the eyes of history. At the center of all this farce appears the dreaded and mentioned Hawkins, the sailor who proclaimed himself “Defender of the right to trade in any part of the world” because. And what is worse, to do it by whatever method he wanted, whether it was negotiating or extorting, kidnapping and murdering.

Next to him was the famous Francis Drake, who at that time was only 25 years old and had not become the legend that would be later. He sailed and fought alongside his second cousin John learning all about the sea and taking his first steps as a pirate, to become years later in the scourge of Spain. All of them because a visceral hatred was born in him as a result of the episode that we tell you here: naval battle of Santiago de Ulúa.

It all started with the start of the great Hawkins expedition in 1567 commanding two powerful ships of the Royal Navy. One, the Jesus of Lübeck, and the other, the minion. The first one had 700 tons and the second one, 300 tons, to which another four more private ships of different sizes were added. The six sailed together and devoted themselves for a year to pillage along the American coast, with the excuse that they were going to trade. And, nevertheless, during the crossing they did not have the slightest objection of assaulting a series of French ships to make hundreds of prisoners and to take as a reward, in addition, all the slaves that they carried.

They did not find the slightest opposition until they reached Cartagena de Indias, whose representatives refused to negotiate with Hawkins. The response of this was none other than getting into cannon shots against the city and its defenseless civilian population. Then they prowled along Corporal Catoche and captured a merchant and three more than the size of a caravel to go later to Veracruz. At that point it was already clear to the Spaniards that their initial business cruise was actually a journey of extortion and piracy against which Isabel I did nothing.

The ten Hawkins ships, which included those that had prey along the road, had to make an appearance on the coast of Veracruz on September 15, 1568. The Spanish authorities initially confused him with the expected fleet of the Indies, since the English wore false flags. That’s why they went in several small boats to welcome them. This is what the historian told Antonio Rumeu de Armas in his book «John Hawkins’s Travels to America (1562-1595)», Published in 1947:« The Spanish lookouts on the island gave the signal of the presence of ten sails on the horizon and no one suspected in the port that it could be a corsair squad, but it was the New Spain fleet that was slowly approaching land. Warned Captain Delgadillo of the presence of Spanish ships, he immediately sent five balls of artillery to be loaded so that, loaded with gunpowder, they could make the ordinance safeguards for the new viceroy of Mexico. John Hawkins, who was educated of all Spanish maritime customs by the pilot Bartolomé González, gave order to respond from the English captain, as is customary to do in the naos of Spain. And nobody suspected anything ».

When they realized, it was already late. The pirate fleet not only took its crew prisoners, but also decided to take the port and the fort of San Juan de Ulúa in order to undertake the relevant repairs and, incidentally, plunder the largest amount of food in the face of his triumphant return to England. But they did not count on the fact that, five days after they had sacked the Spanish enclave, a fleet of Felipe II arrived under the command of Commander Francisco Luján. A smaller fleet than the one commanded by Hawkins. “A single true galleon the size of the Minion would have to face two ships of the Royal Navy,” says San Juan in his book so that we get an idea of ​​the technical inferiority of the Spaniards, to which we should add the fact that the enemy had taken over the port and had even more advantage.

Francisco Luján arrived in San Juan de Ulúa thinking about the war, since he did not know about Hawkins’ presence. He arrived escorting nine merchandise and passenger ships, among which he was nothing less than the new viceroy of Mexico Enriquez de Almanza. That is why he preferred to abstain and, on September 20, ordered his ships to pass majestically in front of the English, without threatening attitude, to anchor in Veracruz. Once there, they landed civilians and merchandise quickly, to exchange them for ammunition, weapons and troops – among them, 130 arcabuceros -, with the aim of launching on pirate intruders.

In order to gain time, Luján began negotiations with Hawkins, although it was clear that with the violence that the English pirate had unleashed against the Spanish crown, that could not end peacefully. Hawkins and young Francis Drake knew it. Thus we arrive at the tense night of December 22, with both fleets prepared for the crash. It seemed that neither of them wanted to be the first to launch the first cannon shot, although it was finally the English who decided to open the contest and open fire on the half-dozen Spanish ships, which responded by heading full sail against the city and its enemy .

The battle started badly. In the first minutes, the cannons of Jesus de Lübeck and the Minion sent the Spanish admiral to the ground. The English burst into shouts and cheers, thinking that the final victory was near. They did not realize that a group of Spaniards had entered the island by another coast and, using trails that only they knew, were able to catch the enemy’s English garrison by surprise. All were captured … or stabbed. None escaped.

Shortly after, they began to open fire on the English, from the same island, while Spanish ships shot at them from the sea. They were surrounded and confused, especially if we consider that, a few minutes before, they were convinced that they were far superior. But no. The Jesus of Lübeck was soon unarmed and unable to move, so Hawkins moved to the Minion, which endured the fight against the Spanish captain barely. Two other of his ships, the Swallow and the Angel patch, were hit and sunk shortly after. The offensive of the small Spanish fleet was so surprising and aguerrida that four of the pirate ships were sent to the bottom of the sea, in addition to the 500 crewmen who were killed and the profits from the smuggling of slaves that were captured almost entirely.

Drake and Hawkins escaped by the hairs with the only two British ships that were saved from the Spanish barrows, although these suffered many damages. In addition, Hawkins and Drake lost the confidence of many of their sailors after humiliation suffered before an inferior enemy. The division in its two ships was so great that, during the flight, they ended up abandoning half of their endowment on the Mexican coast at the height of the current Tampico.

John Hawkins was able to reach Spain. Specifically, to the ports of Vigo Y Marin, where they attended their sailors hospitably in spite of everything. Drake, meanwhile, went up Plymouth with the other boat and was able to conserve much of its cargo. This made it save his personal economy. However, both one and the other decided to hide their shameful defeat in charge of that small fleet of Luján. Drale spread the lie that the Spaniards had betrayed them and Hawkins took that same farce to Queen Elizabeth. They could not justify the loss of almost the entire expedition.

The most important consequence of this battle was that, following it, the political scene was set for the imminent war between England and Spain in 1585. Francis Drake became a staunch enemy of the Spaniards, whom he hated for life With all his soul. Therefore, after recovering from the defeat of San Juan de Ulúa, he continued attacking the ports and ships of Felipe II as a sign of revenge.