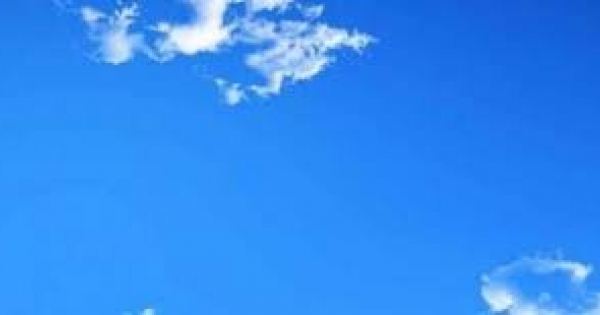 If we get closer to space, we will see a black sky, because there is nothing scattering sunlight before it reaches our eyes.

Who among us has never marveled at the beauty of the blue sky on a clear sunny day and wondered why the sky looks blue? Does it look blue on other planets, as it does on Earth?

Many people believed that the sky looked blue because sunlight reflected off the ocean’s surface and returned to the sky. But the sky looks blue amidst the green fields away from the sea. Another belief is that the source of the blue sky is water droplets in the atmosphere. But the sky appears blue in very dry areas such as the desert. What is the true source of the color blue?

The answer may lie in the source of light in our solar system, or rather the sun. Sunlight may appear white, but in fact it consists of a spectrum of different colors, from red to violet. But the way sunlight interacts with the atmosphere makes the sky appear blue.

Light travels in waves, and each color of the spectrum has a specific wavelength. While red light has the longest wavelengths, blue and violet light have much shorter wavelengths.

Light interacts in different ways with the materials it passes through on its way to Earth. If, for example, sunlight passes through a transparent material, such as water, the light waves are refracted, because the speed of light changes as it moves from one medium (such as air) to another (such as water). While some materials, such as mirrors, reflect light in one direction, others scatter it in many directions. 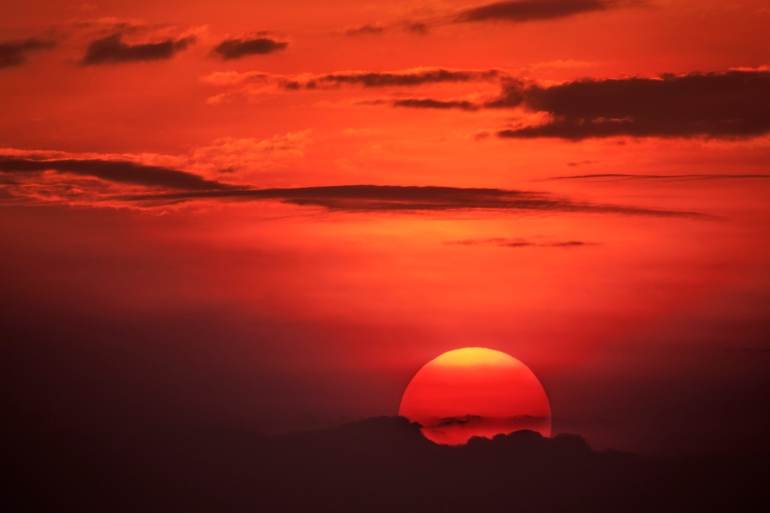 Why do we see the sky blue?

When sunlight reaches the Earth’s atmosphere, it is scattered, or deflected, by tiny gas particles in the air, which is predominantly nitrogen and oxygen. The scattering of light in the atmosphere depends on the wavelength of light and the size of the material that scattered it, in the so-called “Rayleigh scattering”, after Lord Rayleigh, the British physicist who discovered it. Rayleigh scattering is defined as the scattering of light or electromagnetic radiation by particles with a radius of one-tenth of the radiation’s wavelength.

Gas molecules in the air, such as hydrogen which makes up 78% of the atmosphere, are about a thousand times smaller than the wavelength of visible light. Oxygen and nitrogen molecules in the lower atmosphere absorb the shorter wavelengths, such as blue and violet, and scatter them in all directions, while red, with the longer wavelength, passes to Earth.

But the midday sky appears blue rather than violet, because our eyes are more sensitive to blue, and because violet light is absorbed by gas molecules in the air in the upper layers of the atmosphere. The stars are so blue that we don’t see them in the morning.

If we look at the sky away from the sun, the tiny particles scatter blue light traveling from the sky in waves through the atmosphere, towards our eyes to see blue. 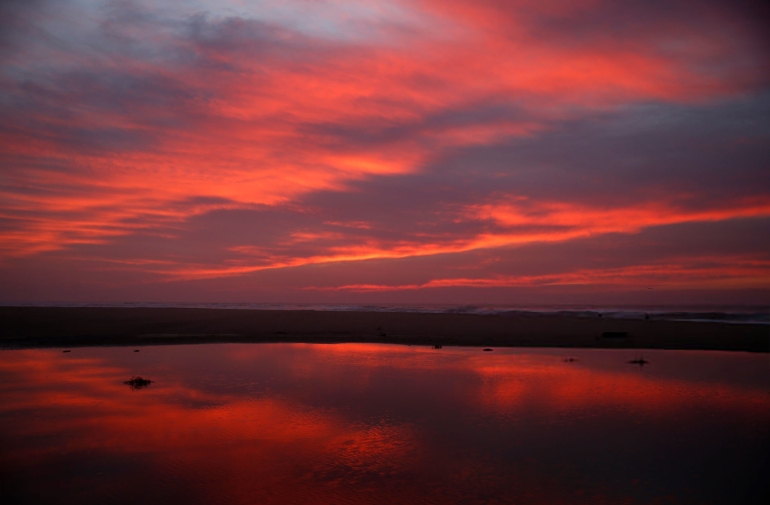 As the sun descends toward the horizon, the sky changes color from blue to red and orange (Getty Images)

Why does the sky look reddish at sunset?

When the sun descends toward the horizon at sunset, the sun’s rays pass through the atmosphere at an oblique angle and then travel a longer distance than at noon. At the same time, the amounts of nitrogen and oxygen molecules in the atmosphere and dust particles that block and scatter sunlight are more than at noon. Water droplets and ice crystals are relatively massive compared to the wavelength of visible light.

These particles and droplets block the vast majority of short wavelengths, such as blue and violet light waves, and thus the effect of these two colors on the sky is reduced. Only the colors with the longest wavelength, such as red and orange, reach the Earth.

These rays color dust and other particles near the horizon as well as water droplets in clouds red, orange and yellow at sunset.

What does the sky look like on other planets?

And if we get closer to space, we will see the sky is black, because there is nothing scattering the sunlight before it reaches our eyes. Unlike Earth, Mars’ atmosphere is filled with fine dust, and it is dominated by carbon dioxide. These thin particles scatter light differently compared to gases and particles in Earth’s atmosphere.

The images taken by probes and rafts sent by NASA to Mars showed that the sunset scene on Mars is the opposite of what it appears on Earth.

At noon, the sky on Mars tends to turn orange or red, but at sunset the sky around Mars turns blue-gray. This is because dust in the atmosphere absorbs the blue color and gives the sky a red color, and the blue light is scattered in the area around the sun. The blue color does not appear in the sky on Mars until at sunrise and sunset, when the light passes through as much dust as possible.

It’s chaos in the Premier League!