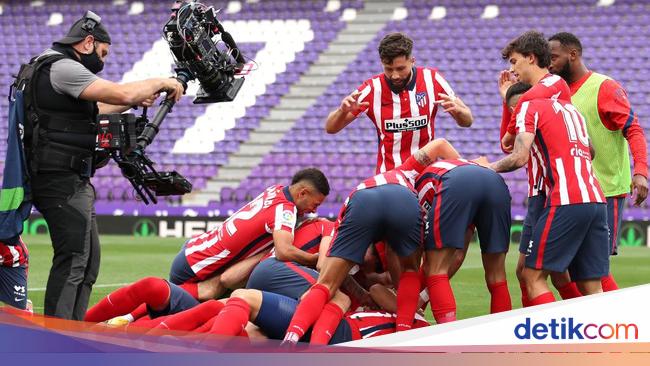 Atletico Madrid have legitimately won the Spanish League this season. The 2-1 victory over Real Valladolid in the last jornada was the determining factor.

Playing at Estadio Jose Zorrilla, Saturday (22/5/2021), Valladolid took the lead in the 18th minute through Oscar Plano’s kick. But in the second half, Atletico got up.

Goals from Angel Correa (57 ‘) and Luis Suarez (67’) sealed the win for Los Rojiblancos, as well as seal the title this season.

These results put Atletico in first place with 86 points, two points ahead of Real Madrid who won 2-1 against Villarreal. This LaLiga title is Atletico’s 11th in history, or the first in seven years.

The course of the match

Luis Suarez had a chance in the 9th minute, but his right-footed shot went wide on the left of the Valladolid goal guarded by Jordi Masip. A minute later, the hosts turned to press through Toni Villa’s long-range shot, but Jan Oblak easily secured the net.

GOAL! Valladolid took the lead in the 18th minute. On the counterattack, Marcos de Sousa sent a through ball to Oscar Plano, who was galloping up front.

Even though four Atletico players chased him, Plano calmly managed to score the ball into Atletico’s goal with his right foot. Valladolid leads 1-0.

Underdeveloped conditions make the pressure for Atletico even greater. They need a goal to win, but getting it is not an easy job.

José Giménez’s chance through a corner in the 27th minute can still be overcome by Masip. Felipe’s header in the 33rd minute missed the goal, and Marcos Llorente’s long-range shot in the 45th minute bounced over the net. 1-0 score lasted until the break.

Entering the second half, Atletico’s attacks were increasingly becoming. In the 46th minute, Suarez’s header failed to break into Valladolid’s goal again. Four minutes later, Jose Gimenez’s header from a corner was also not on target.

In the 52nd minute, Atletico got another chance through Mario Hermoso’s header, but the result was again not at goal. But Atletico’s efforts finally paid off in the 57th minute.

The goal added to the enthusiasm of Diego Simeone’s men. Although Valladolid also posed a threat, Atletico managed to take the lead in the 67th minute.

Intention to feed a teammate, Sergi Guardiola’s bait in the middle of the field leads to Suarez. The Uruguayan forward ran fast on his own with the ball, then ended with a left-footed shot which beat Masip. 2-1!

In the remaining time, no more goals are created. Atletico won and locked the title of the Spanish League this season.