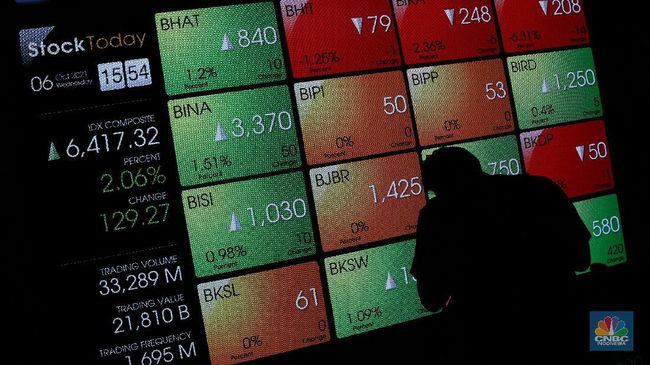 Jakarta, CNBC Indonesia – Towards the end of 2021, technology stocks and their supporting sectors or what can be known as the new economy, which had become the prima donna in the country’s capital market, showed disappointing performances. Meanwhile, the old economy stocks, which are ‘old school’ companies that have been well established and are starting to rise from adversity.

In the first two weeks of the fourth quarter, the Composite Stock Price Index (JCI) shot up almost 5%. The pillars are big cap old economy stocks. The three stocks with the largest market caps on the domestic stock market, which are classified as old economy stocks, experienced an increase.

The increase in the three became the driving force for the strengthening of the JCI. BBCA’s shares even touched the all-time high (ATH) in today’s intraday trading at Rp 1,000 trillion.

The trigger is a corporate action in the form of a stock split. The market responded positively to this corporate action. Meanwhile, BBRI’s shares rose after the success of the jumbo rights issue worth Rp 96 trillion. The formation of ultra-micro holding is also a positive catalyst.

Both of them keep getting inflows from foreign funds. It was observed that in the past week, foreign net buys from BBRI reached Rp. 1.6 trillion and net buys at BBCA reached Rp. 925 billion.

Meanwhile, amid the strengthening of the old economy stocks, the bullish trend of stocks that smelled of the new economy, which had shot up in the middle of the year, tended to reverse direction. This is reflected in the three technology-inspired stocks with large market capitalizations on the bourse, which plunged more than 10% in the fourth quarter.

In fact, the price of BUKA’s shares is already below the initial offering price. The following is a table showing trends in the movement of new economy and old economy stocks in the last quarter of this year.

There is a change in trend due to sectoral rotations to welcome brighter economic prospects in line with the improving conditions of the Covid-19 pandemic.

On the other hand, at the end of the year there is usually a phenomenon when fund managers tend to try to improve their portfolio performance through window dressing.

Window dressing itself is a phenomenon where fund managers enter massively at the end of the year into their top holdings so that their prices rise so that the fund manager’s portfolio looks like it has a slick performance.

Indeed, a large portion of old economy stocks still dominate the portfolios of fund managers, so it is only natural that stocks of this category, which were previously lagging, are now rising due to massive inflows of funds.