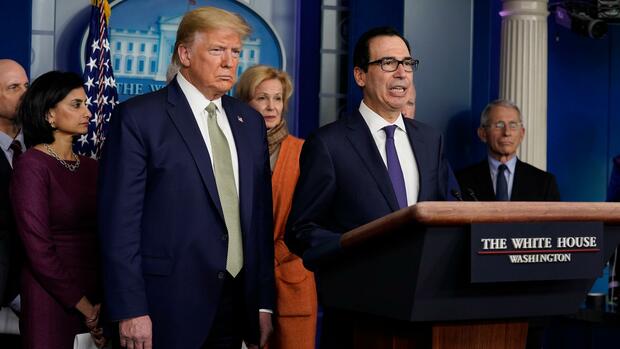 The US President and his Treasury Secretary announce the fight against the corona crisis with helicopter money.

New York, Washington The US government plans to use helicopter money to alleviate the economic consequences of the corona crisis and to pay citizens directly. “We want to send checks immediately. Americans need cash now, and I mean in the next two weeks, ”said Treasury Secretary Steven Mnuchin in a press conference on Tuesday. (You can follow all current developments here in the news blog)

How high these checks will be is still being determined. In addition, the government is planning aid measures for small and medium-sized companies, said Mnuchin.

The aid package is expected to total over $ 1 trillion, making it the largest in US history. Even bigger than the Troubled Asset Relief Act, which the US government used to help the ailing banks at the height of the financial crisis in 2008.

Behind the record aid is the US government’s admission that the economic consequences of the corona pandemic will be far more dramatic than originally thought. In a radical turnaround to his previous statements, Trump had admitted on Monday for the first time that the virus was “not under control” in the US and that the US was “possibly” on the way to a recession.

He also recommended that the U.S. population forego all unnecessary travel, refrain from meeting in groups of more than ten, and stop eating in restaurants. The US stock markets had accelerated their downward slide after Trump’s appearance.

On Tuesday, the US Federal Reserve (Fed) also announced that it would also buy short-term corporate bonds in the future in order to revive the frozen market for these so-called commercial paper markets.

Wall Street responded positively to the Fed decision. The US government’s rescue package then gave additional impetus. The S&P 500 was still up 6.5 percent during the government press conference. The leading Dow Jones index rose by over four percent.

Mnuchin made it clear that Trump’s original call for a suspension of income tax would be abandoned. Instead, the government would send consumer checks to citizens.

Earlier, several American media had unanimously reported that the US government was planning a new aid package. According to the reports, it should primarily include deferral of tax payments for employees and companies and aid loans for small and medium-sized companies. There was also support for US airlines, which have lost a large part of their business due to corona-related travel restrictions.

US President Donald Trump pledged “100 percent support” to the aviation industry on Monday. On Tuesday, Trump explicitly announced support for the largest US airline: “We will Boeing help, ”stressed Trump. The Airbus competitor’s share has lost around 60 percent since the beginning of the year.

The helicopter money – a direct payment from a central bank or government, therefore from “above” – ​​is now surprising, as is the enormous volume of over a trillion dollars. The aid package now being planned would be the third one with which the US government is responding to the corona crisis. A first, already adopted package of measures worth a good eight billion dollars is intended above all to equip the US health system for the expected rush of corona patients.

A second package of around $ 100 billion is currently available to the Senate for approval. Among other things, it should include an obligation for smaller companies to continue paying their employees wages in the event of illness. The US government wants to prevent corona sufferers from getting into financial difficulties or even coming to work despite being infected.

The House of Representatives, the second chamber of the US Parliament, has already approved this package. However, some Republican senators criticize that small businesses with breakdown in sales could be driven into bankruptcy by the obligation to continue paying wages.

The Democrats in the Senate and House of Representatives are also currently working on their own bill for additional Corona aid.

More: Economist Felbermayr expects the “mother of all recessions”.

How New York is hit by the corona crisis