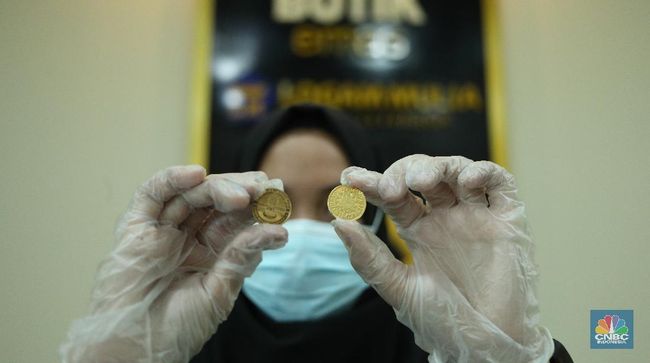 Jakarta, CNBC Indonesia – Antam’s gold price recorded an increase of almost 1% in trading Thursday (15/7/2021) and reached its highest level in the past month. World gold prices, which rose sharply on Wednesday’s trading, triggered the increase in gold bars produced by PT Aneka Tambang (Antam) Tbk. this.

Meanwhile, from within the country, the government has exempted value added tax (VAT) for raw materials for gold bullion and jewelry.

This is stated in Government Regulation (PP) No. 70/2021 concerning the Delivery of Strategic Taxable Goods that are Not Collected by Value Added Tax. This policy will take effect from 28 July 2021.

With VAT-free raw materials, the selling price of gold bullion certainly has the potential to fall, although the main factor is still the movement of world gold prices.

Launching data from the official website of PT Antam, logammulia.com, Antam’s gold weighing 1 gram is sold at Rp 953,000/bar, up 0.85% compared to yesterday’s price. The selling price was the highest since June 11.

Yesterday’s world gold price shot more than 1% to US$ 1,827.06/troy ounce, which is the highest level since June 16 last. The easing of the tapering issue this year has triggered the strengthening of world gold.

Tapering or depreciating asset purchase program (quantitative easing/QE) the US central bank (The Fed) is the main enemy of gold. It happened in 2013, the price of gold then entered a bearish market, or a downward trend for a long period.

The issue of tapering this year was again muted by Fed Chair Jerome Powell.

Powell spoke during the Semi-Annual Monetary Policy Report before the House Financial Services Committee last night, and said he would not change his monetary policy yet. Meanwhile, high inflation in the US, which has raised speculation about tapering again this year, has once again been emphasized that it is only temporary, and inflationary pressures will be moderate in the future.

According to Powell, the Fed’s benchmark is “substantial progress” towards a full-fledged labor market (full employment) and price stability is still “far” from being achieved.

As a result, the world gold price shot up yesterday, and raised Antam’s gold price today.