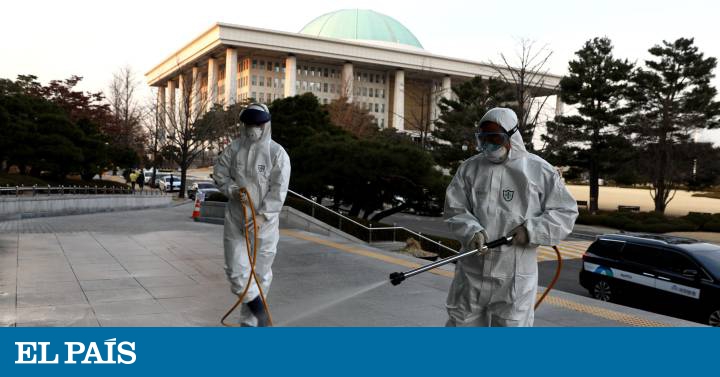 The warning this Monday of the World Health Organization (WHO) about a “potential pandemic” in the face of the acceleration of contagion in the world and the fall this Monday of global markets have dragged Asian stock exchanges at the opening of this new day.

The first transactions of this Tuesday at the Tokyo Stock Exchange have marked the numbers in red. The Nikkei index yielded 3.6% first, then lost more than 1,000 points and exceeded 4%. This Tuesday’s decline represents the worst since the end of October last year and the first of this magnitude that has been caused by global panic Covid-19. The Topix index, the other major indicator of the Japanese market, also suffered a loss of 3.8%, after falling about 1,610 points.

For its part, the Shanghai parquet experienced losses of 2.8%, while the Hang Seng in Hong Kong sank 0.3%. TAIEX of Taiwan also yielded 1%.

The virus advance During the weekend in countries like Italy, South Korea and Iran caused the global market crash on Monday. In Europe, the Milan Stock Exchange suffered the biggest collapse, with 5.5%, while the rest had falls of between 3 and 4%. Wall Street was another one who experienced the crash. In the early hours of Monday, the US Stock Exchange had yielded more than 997 points. The S&P 500 and Dow Jones indexes had their biggest decline in the last two years.

The decline in contagion outside Hubei continues

The National Health Commission of China reported on Tuesday 508 new infections: 499 from Hubei, the province of which Wuhan is the capital, and only 9 outside its borders, underpinning the decline in cases in other Chinese regions.

In the last 24 hours, 71 deaths have been registered due to the new coronavirus, which totals 2,663. A total of 77,779 people have been infected and 27,354 have been cured since the epidemic broke out in December.

While the situation in some Chinese provinces seems to improve, South Korea has become the main focus of coronavirus out of the second world economy. This Asian country reported 60 new cases on Tuesday, bringing the total infections to 893. Eight people have died due to the pathogen.

More than half of the infections are concentrated in two parts of the country: the southeast city of Daegu and a hospital in the adjacent county of Cheongdo. Specifically, the main focus of infection is a temple of the Shincheonji religious sect in Daegu, where it is believed that the spread of the virus began. The group has assured that it will provide a list with all its members in South Korea, which could be hundreds of thousands, to be examined.

Prohibition of trade and consumption of wild animals in China

The highest Chinese legislative body has announced the immediate prohibition of trade and consumption of wild animals, a decision framed in the struggle of the second world economy against the epidemic of Covid-19, which has caused 2,666 deaths and 77,779 infections, according to the latest count.

The announcement was released through the official Xinhua agency on Monday night, and it happens to an initial suspension of trade and consumption of these animals in January. The ban responds to suspicions, unconfirmed, that the new coronavirus has been transmitted from animals to humans. Specifically, from a Wuhan market, the Chinese city epicenter of the epidemic, which were sold, among others, bats, snakes and civets.

Zhang Tiewei, spokesman for the Committee on Legislative Affairs of the National People’s Assembly (PNA), the Chinese legislative body, considered “urgent and necessary” to implement the ban at a “critical time for the control and prevention of the epidemic.”

According to the prohibition, the consumption and illegal trade of wild animals will be “severely punished”, without specifying how, as well as the “hunting, trade or transport of wild animals for the purpose of consuming them”.

Fourth death in the Diamond princess

Japan, the second country after South Korea with more infections (about 780, including the occupants of a cruise), has reported the fourth death of a passenger from the Diamond princess, the cruise ship quarantined with more than 3,700 people on board for two weeks in the port of Yokohama after confirming a first case of coronavirus. More than 620 were infected during that period, and four have died later. All are Japanese octogenarians who were on the ship, although it has not been specified if all four tested positive for the coronavirus test.