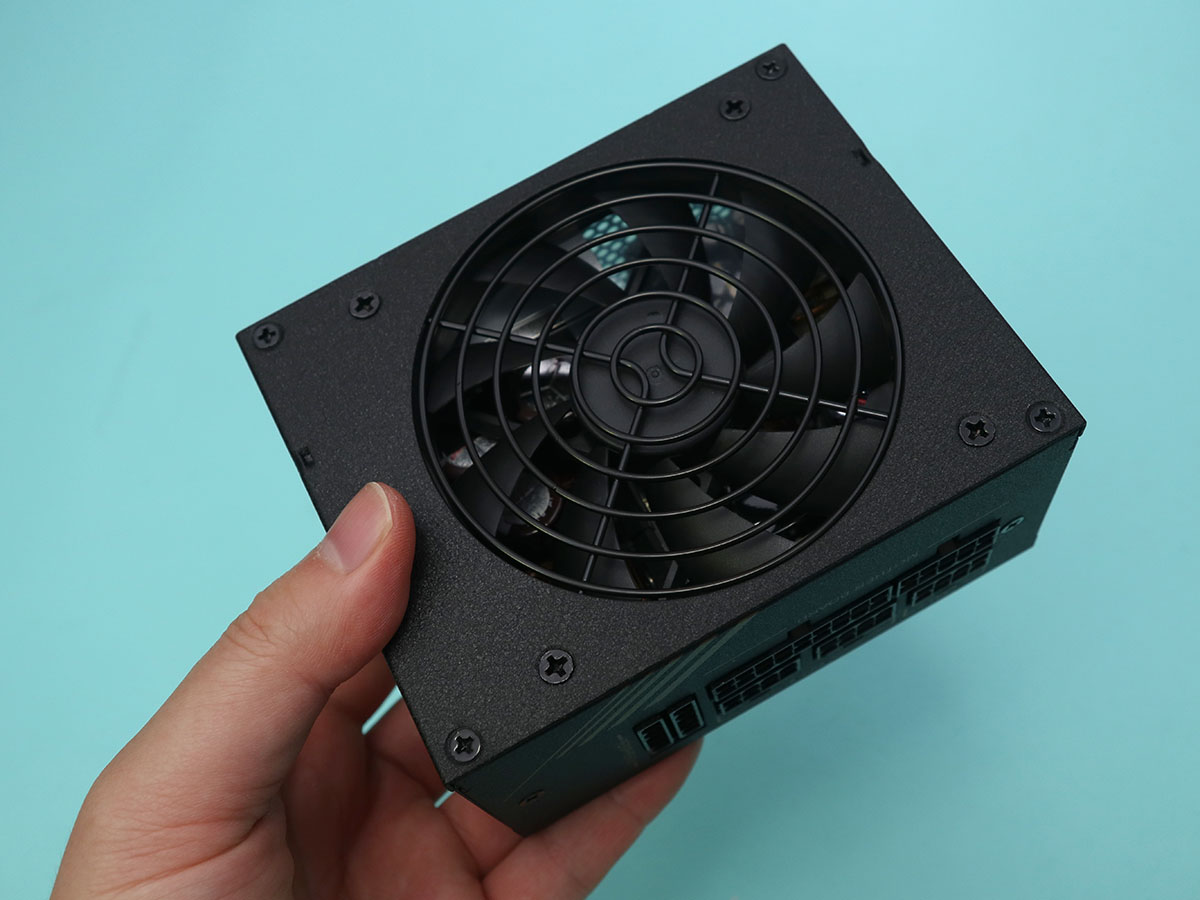 DAGGER PRO that can be easily held with one hand

Even for heavy PC homebrew users who frequently buy and replace parts every time a new CPU or GPU comes out, the life of only the “power supply” and “case” may be quite long. In particular, if you buy a high-quality power supply once, it will not break easily, so it is natural for 5 years, and if you notice it, you may have been using the same power supply for 10 years. I still use SilverStone’s “Strider Gold” series, which I bought at Cleverly (bankruptcy in 2012).

Therefore, I didn’t pay much attention to “power supply” for a while, but I was a little fascinated by “DAGGER PRO” released by FSP at the end of July.

That’s because I bought Cooler Master’s ultra-compact ATX case “MasterBox Q500L” a while ago, but this Q500L has a power supply on the front for miniaturization. If you put a 240mm radiator in the upper part for a high-end configuration, the power will be offset a little downward, but that will take up space on the video card and will not fit a video card larger than 270mm.

In the latest GeForce RTX 3070/3080 and above models, the amount of heat generated has increased considerably, so the cooler has become larger and the card has become longer. The Q500L, which was available in the GeForce RTX 20 / GTX 16 series, cannot be installed in the top expansion slot in combination with Strider Gold.

I use the PCI Express slot under the motherboard to avoid interference, but this is a trick that can be connected with x16 because it is Supermicro’s “C9Z490-PGW”, and it becomes a x8 connection on a normal motherboard and it becomes a performance bottleneck. On the contrary, it will not be possible to incorporate it in the first place. When this happens, there is basically no choice but to replace the case. However, I also like the compactness of the Q500L, which is comparable to that of the microATX.

The MasterBox Q500L has a power supply on the front for compactness, but the length of the expansion card is limited when using a power supply with a depth of 180 mm such as Strider Gold.Combined with simple water cooling, the clearance becomes even more severe, and a 304mm video card like the GeForce RTX 3080 Ti GameRock OC won’t fit in the 1st to 4th slots.

See also  [Yajiuma Mini Review]Seagate M.2 SSD "FireCuda 530 Heat Sink" that can be attached to PS5 as it is. Introducing the embedding method-PC Watch

That’s why I focused on the SFX power supply DAGGER PRO. Not to mention the specs of width 125mm and height 63.5mm, the depth is only 100mm. With this spec, even if you attach it to the front of the Q500L, it seems that you can afford a lot. Even so, it has a capacity of 850W, so isn’t it okay to combine it with the GeForce RTX 3080 Ti?

That’s why I asked DAGGER PRO to be sent via public relations, incorporated it into this environment and tried it, but it was exactly Bingo (note that it is attached to ATX using the attached conversion bracket). This time I tried to combine it with Palit’s super large video card “GeForce RTX 3080 Ti GameRock OC”, but even if I inserted the video card in the slot on the top of the motherboard, there was a lot of clearance. For the time being, I think you can see that DAGGER PRO is a fairly effective product not only in environments such as Mini-ITX but also in ATX environments where clearance is tight.

Compared to the iPhone 5S, you can see how small it is.This is packed with 850W

With the DAGGER PRO, which has a depth of only 100 mm, the video card can be easily inserted into the top slot. By the way, the C9Z490-PGW has 7 expansion slots, so other motherboards with only 6 stages will have more clearance.Any video card is OK as long as it fits in the case

There are some other merits that I found when I assembled it. The first is that even if the cable is a modular type, it is soft and easy to handle because it is a flat type. By the way, the cable for CPU auxiliary 12V and PCI Express is not bifurcated from the tip on the device side, but bifurcated from the root side of the power supply. The cables can be tied up near the power supply, which improves the overall appearance.

The other is that it is easy to hold and weighs. ATX size power supplies are generally heavy, and when incorporating them into the case, they are often installed with “Yeah” while paying close attention not to collide with other parts. A few years ago, when I installed the power supply, I experienced the first back pain in my life, which made me feel awkward. In that respect, DAGGER PRO can be easily lifted with one hand, and it can be lifted to the posture and joints. The burden was small. In addition, since there was little interference with the surroundings, installation in place was extremely smooth.

Anyway, the size and weight are easy to assemble.This will not bother you with any work

I didn’t think that I would talk so much with just one power supply unit, but DAGGER PRO was a critical hit for me. By the way, the price is less than 20,000 yen at 850W, and it is a conscientious price that does not mean “I had a hard time packing the capacity of 850W into SFX. Moreover, it is a slightly special form factor and I will add a premium to the fullest.” Considering its compactness and ease of handling, it is rather a bargain.

See also  Microsoft to raise prices for Office 365 for businesses