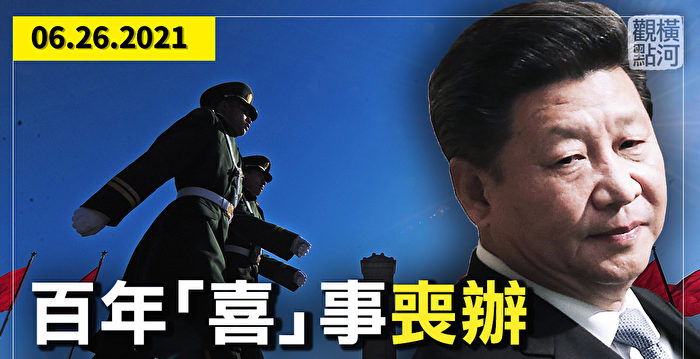 Today’s focus: The centennial celebration of the Chinese Communist Party is like a funeral, a red brainwashed double-edged sword, and “Never Rebel the Party” highlights the CCP’s identity crisis.

The CCP’s centenary celebration is like a funeral. From the driving force of the revolution to the object of the revolution, red brainwashing is also a double-edged sword. After the failure of economic development as a legitimate substitute, the CCP has become the only option to adjust its economy to the political system.

The Central Commission for Discipline Inspection used Gu Shunzhang to kill the door to warn never to betray the party, indicating that the CCP has not yet shaken off the mentality and practice of the rebellion 80 years ago, highlighting its identity crisis.

There are still a few days before July 1st, a hundred years have passed since a boat on the South Lake in Jiaxing. We will not talk about the century-old red disaster today.

Two representative phenomena of party celebrations: rumors are super defensive, and they will never betray the party with murderous vigor.

The recent closure of Tiananmen Square, the red armbands everywhere, the inability of express delivery to Beijing, and those who have registered for travel in advance are not like celebrating anything at all. Super precaution means that the CCP regards the people as enemies.

Of course, even in the revolutionary period, the CCP is hostile to the people, and the CCP is like that. The American film “Heaven and Earth” is a Vietnam War film in which Chen Chong plays the protagonist’s mother.

Ownership of the means of production. Public ownership does not exist, and it is impossible for everyone to directly manage it. Even in a democratic country, the government must be entrusted to manage it. Even elections are indirect. In China, the CCP has taken charge of the entire people. The so-called ownership by the whole people and collective ownership. It is the ownership of the Chinese Communist Party. According to Marxist-Leninist theory, it is the object of revolution.

Mao Zedong’s attempt, regardless of his motivation, did put forward a set of theories and put them into practice: to continue the revolution, whose life is the most important thing to reform, and the life of the Chinese Communist regime: capitalist roaders, the national seizure of power that began in January storm, that’s A failed attempt, whether it was Mao’s personal attack on political enemies or self-revolution to avoid being revolutionized by the people, failed. The Marxist-Leninist nature of the CCP is also bound to fail.

With the convergence of the two forces, the problems Xi Jinping faces are even more serious.

The CCP’s rule broke the historical tradition, that is, village autonomy. The CCP’s organization and the regime were rushed to the end. The government was established in the village. The original intention was to ensure the regime, but the consequence was that the people could experience the class antagonism oppressed by the CCP. The small-scale resistance against CCP officials and organizations has never stopped, but rarely has it risen to theory. Part of this work is actually done by the CCP’s own brainwashing education.

The opposition between red history and reality. The legitimacy of the CCP regime came from Mao’s revolution armed with Marxism-Leninism. After the Cultural Revolution, starting with Deng Xiaoping, he tried to use economic development as a substitute for legitimacy. Jiang further used the three representatives, but did not abandon Marxism-Leninism. The contradiction between CCP theory and practice is not so prominent.

Xi Jinping adjusts his economy to the political system

See also  that's what it is and why it is celebrated

In other words, abandoning the economy as a substitute for legitimacy can only return to Mao Zedong’s revolution. But there are always two sides to things. The Maoist revolution is mainly two-fold. The class struggle between Marx and Lenin and the fight against the world can easily become an ideological weapon against the CCP. During the three-year famine period, although armed resistance was mainly in remote areas, it was basically driven by hunger, with few political goals, and the CCP still held back the aftermath of the revolution.

Red brainwashed into a double-edged sword

However, the situation is different after the reform and opening up. First of all, the workers were educated, including the education of the CCP’s revolution. Naturally, the protection of their rights was linked to the CCP’s labor movement in the early years. The Jasic incident in 2018 was a typical example, and it quickly attracted labor movement activists. The support and solidarity of the leftist students at Peking University and Tsinghua University. The ideological weapon of these people is the Marxist-Leninist-Maoist thought instilled by the CCP for a long time.

Although the suppression was quickly suppressed, the contradiction between the Communist Party of China and the Communist Party of China that proved the legitimacy of today’s rule by the revolution of the year has not been resolved, which is also the inevitable reaction of the CCP’s red propaganda. You can’t convince the people that it is also a resistance and revolution against the oppressors. What you do is right, and what others do is wrong. You want others to learn to imitate but not to imitate. The real threat that the CCP needs most to guard against comes from itself.

Hatred is the CCP’s long-term education on the differences between urban and rural areas.

Recently, Zhang Xifeng, a senior high school student in Hengshui, said in a speech, “I am a native pig from the countryside, and I have to be determined to get the cabbage in the big city.” It sparked a big discussion on the Internet. I can’t verify if it’s the Passat that his parents came to pick him up after the college entrance examination. This is a Volkswagen mid-range car.

I think there are two issues worthy of attention here, one is hatred, the other is the source of hatred is the difference between urban and rural areas, and both belong to the CCP. The hatred is the CCP’s long-term education, and the difference between urban and rural areas is entirely created by the CCP. During the period of the Republic of China, the population could move freely.

“Never rebel against the party”, the example cited is actually Gu Shunzhang in 1931. Gu Shunzhang’s rebellion, or Xiang Zhongfa, was an illegal period of the CCP. It was not an active rebellion, but a rebellion after being caught. It is not surprising that such things happen when the CCP is weak. The problem is that the CCP is a hundred years old, and it has been around 72 years since its founding. It is still murderous to destroy the defectors. (The CCP has many traitors, but Gu Shunzhang is the only one who was destroyed).

How many regimes in the world have defectors after 70 years in power? Except for North Korea, it is the CCP. Has anyone heard that Western countries need to defect? It shows that the CCP is a small closed circle and thinks that it is still illegal. This is a crisis of identity as a party.