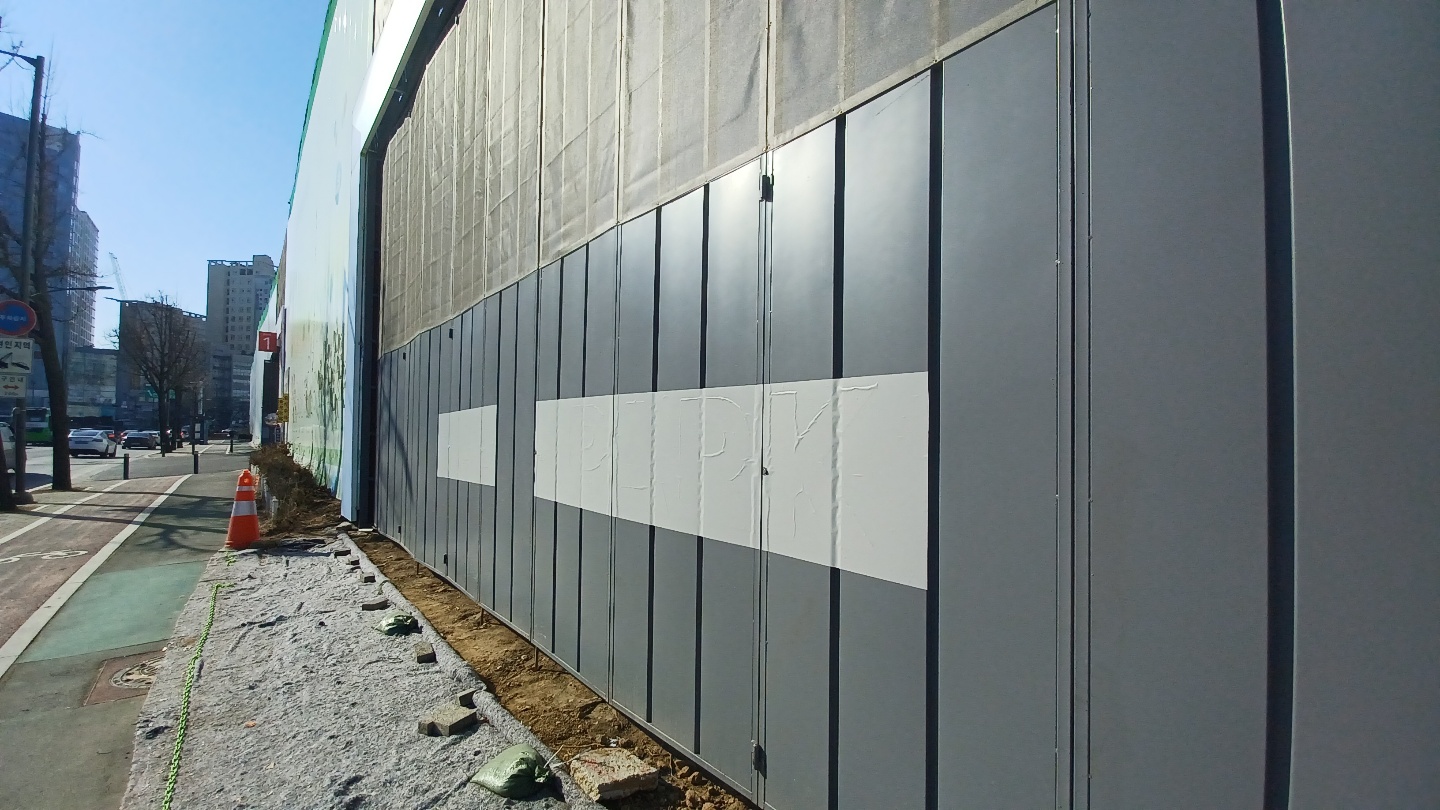 Amid the successive construction site disasters that occurred in Gwangju, there were even rumors of the expulsion of HDC Hyundai Development Company, the report confirmed by the Kyunghyang Shinmun that Hyundai Development Company covered up the ‘IPARK’ logo attached to the wall at the reconstruction site of Jamsil Raemian Ipark in Songpa-gu, Seoul.

At the construction site visited on the 18th, no traces of HDC Hyundai Industrial Development could be found except for the logo of the developer on the ‘clear and clean Songpa’ banner attached by the Songpa-gu Office. There were a total of two ‘IPARK’ logos on the wall surrounding the construction site, but they were all covered with taping paper. An official from Hyundai Development Company explained, “We took temporary measures at the request of the union.” As the theory of expulsion from Hyundai Industrial Development spread not only in Gwangju but also nationwide, ‘hidden brand name’ appeared.

An official from the Jamsil Jinju Apartment Reconstruction Association said in a phone call, “We cannot confirm whether the union has officially asked for the logo to be covered.” “I don’t want to use the brand,” he said. The official said, “We also wish for Hyundai Development to go ahead and Samsung C&T to do the construction alone, but it is difficult to easily request the contract to be terminated when the contract has already been signed.”

Jamsil Raemian I-Park is a reconstruction complex of Songpa Jinju Apartments completed in 1980, jointly built by Samsung C&T (Raemian) and HDC Hyundai Development Company (IPark). Jinju Apartment, which was considered a large-scale complex even in 1980, is expected to increase from 1507 households in 16 buildings to 2636 households in 23 buildings through reconstruction. Only the demolition work has been completed and the actual construction has begun.

Members of The H First Steer I-Park in Gaepo-dong, Gangnam-gu, who are about to move in in November 2023, also responded that they were “uneasy”.

DH First I-Park is a large-scale reconstruction complex in Gangnam, jointly built by Hyundai E&C (DH) and Hyundai Industrial Development (IPark), with a total of 6702 households. Most of the construction of the basement floor has been completed, and work to raise the ground floor is currently in progress.

Some union members even expressed an opinion in the members’ group chat room, “Let’s remove ‘IPark’ from ‘DH First I-Park’. If there is a certain agreement of the members, there is a possibility that the ‘IPARK’ will be omitted. This is because, according to the Trademark Act, the consent of the construction company is required to use the construction company’s own brand, but there is no separate provision for arbitrarily removing the brand to be used.

In a phone call, union member A said, “Since the current construction is in a state of progress, there is no possibility that Hyundai Development Company will give up, and if the construction is delayed by talking about canceling the contract for nothing, most of the union members do not want to raise a big problem. I don’t think so,” he said, “but at least I would like to drop the brand name of I-Park.”

Vi d’Arcane/League of Legends is coming to Fortnite; All we know