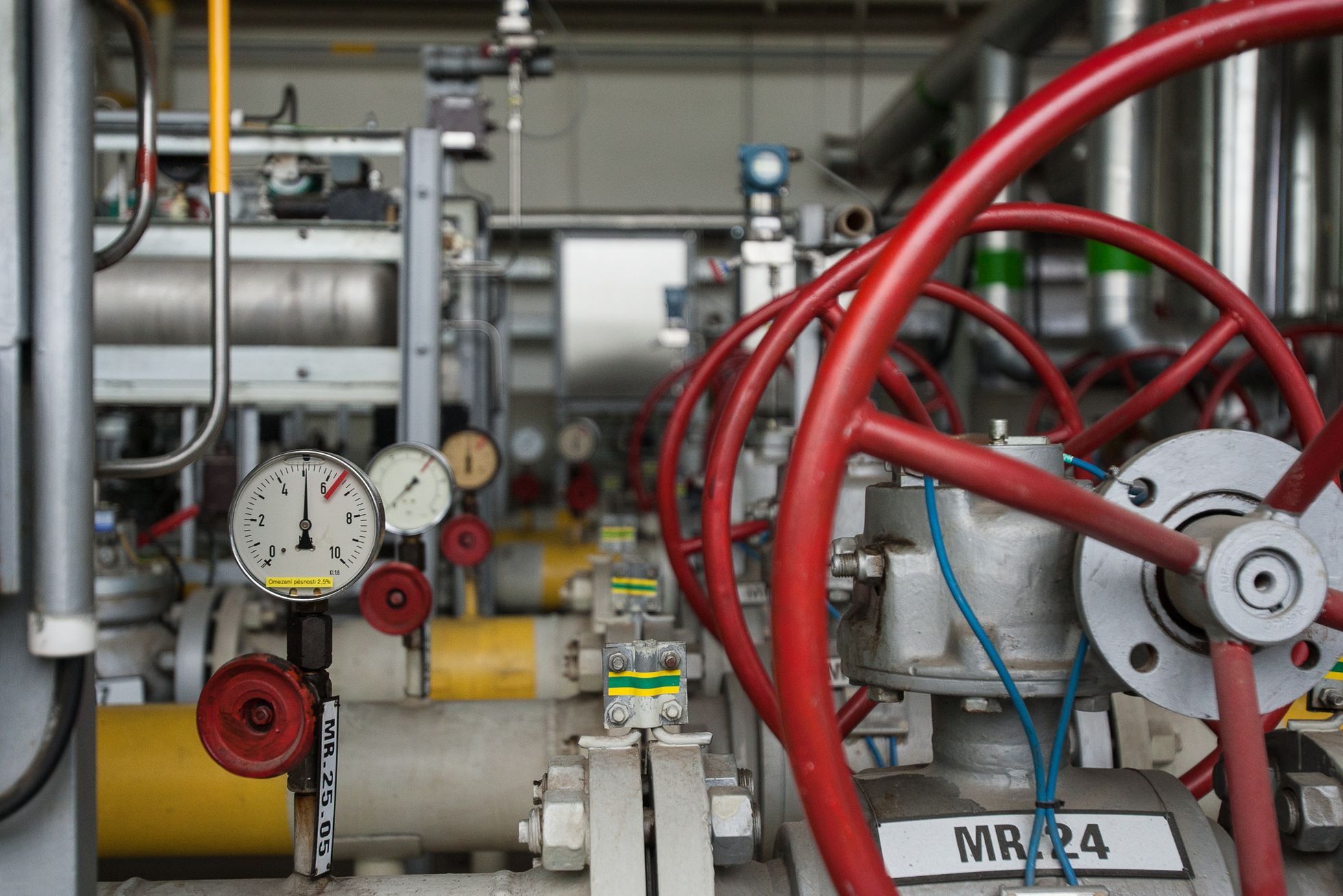 Due to the war, natural gas traders are cautious about concluding contracts, fearing that they will be unable to supply the raw material. In an interview with Aktuálně.cz, Vít Brůha said that he works as an energy purchasing manager at Centropol. Brůha describes how buying gas for end customers works or how long liquid natural gas can replace supplies from Russia.

How often and in what quantity do you have to buy natural gas for your customers?

The purchase is made continuously throughout the year and is based primarily on our customers ’purchases and the contracts they sign with us.

We can divide the purchase into two parts. On the one hand, these are great customers. They usually have higher consumption, in which case gas purchases take place as soon as the store closes. Then there are customers from the retail segment, i.e. smaller businesses and homes, for which we have several product price lists, which are offered and extended to customers. In this case, they buy gas continuously throughout the year as the contracts are renewed or extended. We also make purchases on an ongoing basis for procurement for which we have a prediction that they should come to Centropol.

Currently, however, we buy mainly depending on whether there is any trader who wants to sell us gas. We did not deal with this before, but now gas traders are quite cautious due to the Russian-Ukrainian conflict. They do not want to get into trouble because they cannot supply gas if supplies from Russia to Europe stop flowing.

Recently, there has also been talk of a lack of gas storage capacity, how do you solve this problem?

This is another specific thing related to the purchase of gas. Centropol has its own leased storage tank, which meets the requirements of annual supply safety standards, as required by law, for customers primarily at home and possibly large customers such as hospitals, food manufacturers, critical infrastructure and the like. This happens mostly in the summer, the injection season (period when the raw material is filled in fuel tank – editor’s note) lasts from about April to the end of September.

When it comes to the will of traders, it is not clear that Centropol would buy gas directly from Russian gas Gazprom.but is it done through intermediaries?

Gazprom and I had talks once. They offered us some very basic sales (trade volume unit – editor’s note), which roughly equals consumption throughout the Czech Republic. In addition, you must buy gas from them for a longer period, for example two to five years.

As a trader operating only in the Czech Republic and having only a certain number of customers (even less for gas than for electricity), we cannot afford such a trade. So we trade with partners who are like “intermediaries”, as you said, between us and Gazprom.

When I imagine that I am your new customer in the current tense situation on the energy market and I use natural gas for heating, water heating and cooking, how can I be sure that you will provide gas for me?

You don’t have to worry about that. But in general: Centropol, like all alternative energy suppliers in the Czech Republic, depends on bilateral relations with intermediaries that buy gas from Gazprom or elsewhere, for example in Norway. And if Gazprom stopped providing gas, our intermediaries would not be able to supply it to us again, despite the contracts. So the only thing you have to worry about is that there is a risk that we will not provide you with gas, because our business partner will not meet its obligations.

However, this applies to most Russian gas suppliers. It is known that the Czechia is more than 90 percent dependent on gas from Russia.

So the country is really so dependent on Russian gas? Even if the gas is bought on the exchange in Europe, is it Russian gas?

So. The Czech Republic is connected to gas pipelines leading from Russia connected from the German side or from the Slovak side via Ukraine. So even though the gas is sold to us by companies like Uniper, RWE and so on, some 99 percent is still Russian gas from Gazprom.

Is it possible to explain to a half-pathetic how the gas path looks from the moment you buy it to the time it flows into my house?

This cannot be fully described, because there are intermediaries between us and Gazprom. The gas is delivered virtually to the virtual point of sale of the energy market operator (OTE). These are the so-called daily nominations (expected customer consumption – editor’s note)which takes place on the OTE platform. It is simply a system where purchases, consumption and so on are dealt with. And it is all more about counting numbers. If I bought gas from Gazprom, I might be able to describe to you where it is leaking at the moment.

Do you also use spot market for trading? Bohemia Energy, which before its collapse paid for the country’s largest alternative energy supplier, paid for the fact that it relied on the spot market, where prices varied widely.

We only have a few customers from wholesale, i.e. entrepreneurs in the largest customer segment, who chose this product themselves at the end of last year, so we bought for them on the spot market. However, we bought forward delivery for regular customers from home and small businesses (a forward contract is a purchase at a certain future date at a fixed price at the time of the conclusion of the contract – editor’s note) more storage capacity we used at the beginning of this year until the end of March.

When we talk about storage capacity, and gas storage facilities in the Czech Republic? Will they help us in the long run if Russia closes the pipes or just covers the winter peak?

Our supplies are calculated mainly for the winter, because in the case of gas we are mainly talking about heating. But as you mentioned, there are also customers who use gas for water heating and cooking. Thus, if Russia suspends delivery on June 1, the Czech gas supply will last until October. However, if the supplies are cut off during the heating season, the actions will last for a month, a maximum of two – depending on how the outside temperatures are moving. The Czech Republic thus has no dizzying solution to the situation where Russia would suspend gas supplies.

And is natural gas (LNG) at least a partial alternative in the future?

It is an alternative. The problem is that it is transported by sea, and we as landless countries must expect to be able to negotiate a business partnership with someone who has access to the terminals and can get liquid natural gas by pipeline from Germany or Poland to the Czech Republic. The situation in the Czech Republic in relation to LNG in comparison with other countries in the EU is simply not entirely good.

It is also necessary that the business partners who sign the deliveries with us really deliver the LNG even when Russia stops its delivery, and not that they say something to that effect: “Don’t be upset, we need LNG for our own needs. now, unfortunately, we can’t send anything, even if we promised you. “

So liquid natural gas is the solution, but probably in some two or three years, when all of Europe can be transformed from one Russian gas to another. If LNG were to be used on a large scale now, I think each country would advocate its own and maybe then give away a little more.

Gas from Norway is also mentioned as an alternative. Would it be at least a substitute for one in Russia?

Not one hundred percent. If Czechia and other countries wanted to use gas from Norway, for example, the pipeline would have to be strengthened, because the existing pipelines leading from Norway can hold only a certain amount of gas, or change the parameters, that means the pressure and temperature. the gas pipe. It is simply not as simple as with electricity, which constantly flows through the wires in the same way. The gas is simply tangible and not so easy to transport to individual customers in a short time.

What is the final price the natural gas customer has to pay? What are all the factors involved?

The final price consists of two basic parts. On the one hand, it is a force element, meaning cubes that you burn in the pan or in the terminal equipment. Each trader controls himself according to how he bought the gas and the best price he can offer the customer.

Then there are parts of distribution – that is distribution fees, which are determined by the distributor and regulated by law, we as a trader do not talk about it.

Then there is even the smallest, third element, namely the constant salary for the collection point service. Each month it is about 60 to 90 crowns. These are the costs that the company creates in the employees – administration, sending invoices, resolving various requirements and so on.

And where did the gas extracted, for example, play a role in the final price?

No. When traders in the Czech Republic buy gas from their trading partners, it is simply standard gas. It is not known exactly where it was extracted, whether it is compressed gas or whether it was extracted as a by-product of oil and so on. They really only trade the standard number of megawatt-hours on a virtual trading point, so they don’t “have to worry” about what kind of gas it is, but 99 percent will still be from Russia.

How do you, as a company, manage the current energy situation? Will the collapse of Bohemia Energy shake your confidence in alternative suppliers?

The failure of Bohemia Energy was not entirely pleasant, mainly because the mentality of customers changed. People have realized that energy is not a matter of course – that they turn on a switch or turn on a gas sensor and everything works as it should. They realize that even the largest and strongest companies do not guarantee that what they agreed with was true. So we felt a little distrust of the customers.

After the collapse of Bohemia Energy, we tried to recruit customers for us during the acquisition wave, which was partially successful.

How many former Bohemia Energy customers are involved?

After the fall of Bohemia Energy, tens of thousands of customers passed through the regime of the supplier of last resort to us.

And do you still feel that customers need to be reassured that they will get gas and that there are no other accidents after the example of Bohemia Energy?

I take care of the purchase, so I live longer between megawatt hours and ratio. So those who operate the customer line would know that. However, at the meeting, colleagues at the call center did not report any increased activity and questions of this kind. When Bohemia Energy fell, that was the case, and people asked us if it affected Centropol and they were afraid, which of course we told them no. But I think the situation has calmed down now.